Tutu I, II, III, 2009. Inspired by costumes for the Ballet Russes Installation at The Frick. All works by Isabelle de Borchgrave (Belgian, b. 1946).

The Frick Pittsburgh continues its recent foray into fashion with exuberance, exhibiting a group of contemporary paper recreations of iconic outfits from the past. Ranging from the era of the Medici to the early 20th century with costumes from the Ballets Russes, “Isabelle de Borchgrave: Fashioning Art From Paper” though (January 6, 2019) seems tailormade for the institution. First there were killer heels, then intimate lingerie; now period ensembles have been placed throughout the museum, creating affinities with the historical paintings. 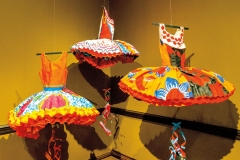 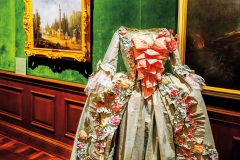 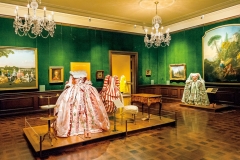 The show hits all the right notes for the Frick with its connection to history and to art, technical virtuosity, and, above all, material culture. Just as the museum presents the story of the Frick family in a house that was practically untouched after Frick’s departure for New York, these trompe l’oeil apparel give us a glimpse of times past, allowing us to marvel at the textures and details as well as the evolution of style, especially for women.

Isabelle de Borchgrave produces both useable objects for her interior design lines and objects of desire in these paper dresses. After marveling at the oversized collars, the attached roses, the intricate patterns, and the voluminous skirts, thinking about how to walk or sit in some of the more fantastic designs, we wonder about de Borchgrave’s techniques, how she experimented with various processes to make the paper mimic fabric surfaces, the fall of drapery, and all manners of adornment. It is a feat achieved through research and experimentation. Inspired by the Fashion Institute at the Metropolitan Museum of Art, the artist worked with her friend Rita Brown who had extensive experience in theatrical costumes and textile restoration. Brown worked on the patterns and de Borchgrave painted the dresses.

For the artist, her fascinating process is really just a means to an end, or as she put it “a merry and shameless sham,” as she considers herself primarily a painter. As curator Sarah Hall said, “she is an artist who processes her experience through the act of making.” She derives the most satisfaction from covering the surfaces with color and pattern. In fact, while she uses historic sources, she is not interested in exact replicas, but proceeds “in the spirit of” the originals. She allows herself creative license as she indulges her love of color. In order to compare her pieces with the sources, mainly taken from paintings, color photographs of the originals have been placed with most of the outfits.

That same interest in affinities, rather than copies, characterizes the installation of the work at the Frick. It is the only venue where the mannikins have been placed in painting galleries, where, in Hall’s words, “the domestically scaled rooms and varied architecture serve to activate them in a more cinematic way and help us do a little imaginary time travel…opening up a more imaginative space.” For example, Madame de Pompadour’s “wedding cake” gown, taken from a painting by François Boucher, stands next to the Frick’s Boucher. As Hall reflected, “Isabelle’s work is more about inspiration—like the best illusionists, she both unsettles and delights us and shows us more than we would have noticed without her intercession.” Since the Frick commissioned de Borchgrave to make a dress based on their painting by Peter Paul Rubens, this kind of pairing will be available periodically for viewers.

In other galleries, the mannikins are arranged like models along a runway, or in the case of the bold costumes for the Ballet Russes, in an arrangement that hints at the movement of the dancers. The varied heights as well as de Borchgrave’s luxuriously colored “fabrics” create a cacophony of color and movement that animate the galleries. Mixing fashion and tableaux, the installation becomes a spectacle itself, strangely reminiscent of the Pageant of the Masters at Laguna Beach, Calif.

It’s difficult to know how to categorize this work. Are the outfits fashion or art? The easy answer is that they are both, or as Sarah Hall put it, they are “art that is about fashion.” The Frick, which has fashion in its collection, adds information about fashion history in the labels, but de Borchgrave is not about recreating fashion history a la Madame Tussauds. And if this work was placed in the context of contemporary art, there would be references to the changing ideas about the body, class, and race, so the work exists outside of categorization. Perhaps de Borchgrave, like many artists who work outside traditional mediums, needs to craft a new term that introduces the possibility of being both or neither art and fashion. Even without solving this semantic problem, there is no doubt that this is a crowd-pleasing show that can also elicit more serious consideration.