Levels of bromide and total dissolved solids have improved in the Allegheny, Monongahela and Ohio rivers in recent years. But the future is uncertain due to potential new sources.

Both are indicators of water quality in southwestern Pennsylvania’s three major rivers. High concentrations of bromide and other salts in streams and rivers pose environmental and public health risks.

Bromide is a natural trace element found in many water sources. Higher concentrations are found in coal, wastewater from oil and gas development and in some mine drainage. It is also used in products ranging from flame-retardants and pesticides to dyes and pharmaceuticals.

Total dissolved solids (TDS) are the sum of all salts in the water. Sources of TDS in rivers, streams and groundwater include some rocks that dissolve naturally and result in higher levels of minerals, such as calcium; groundwater rich in metals, such as iron, that is brought up during coal mining; road salt; and industrial facilities, such as coal-fired power plants.

Levels of total salts in the Monongahela River increased in 2008 and 2009 and at times exceeded 720 micro Siemens per centimeter, the threshold at which drinking water may have a noticeable taste to consumers. Drinking water utilities also reported higher DBP levels and more DBPs containing bromide. 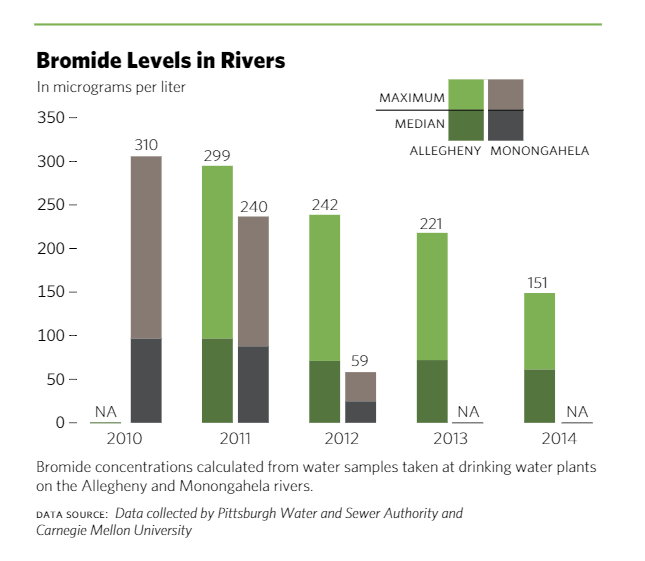 Higher bromide concentrations were also found in the Allegheny and Monongahela rivers in sampling done by the Pittsburgh Water and Sewer Authority and Carnegie Mellon University in 2011. In some cases, concentrations were high enough to cause the plants to adjust processes to ensure drinking water met regulatory standards.

Following intermittent elevated levels of TDS reported in the Monongahela River from 2008-2010, levels stabilized. In subsequent years, TDS levels have been within the 720 micro Siemens per centimeter drinking water standard in each of the region’s three major rivers.