by Vicky A Clark
Abby Warhola

The Andy Warhol Museum’s first two exhibitions of the year are a great pairing. Jessica Beck’s excellent My Perfect Body brought together work from Warhol’s entire career that focused on body issues, from the nose picking and acne of his youth to the scars from being shot in 1968 to images of bodybuilders and Christ. This intensely personal work has been complemented with the paintings by Firelei Báez in Bloodlines (through May 21), again due to the efforts of Beck, who brought her show here from the Pérez Art Museum in Miami. Body issues are also at the core of Báez’s work, but in her case, they reflect cultural mores, stereotypes, and fears embedded in racial identity. Her work resonates with Warhol’s while not slavishly following his specific interests. 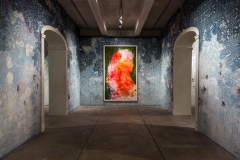 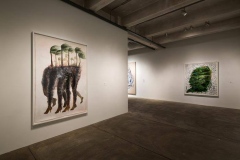 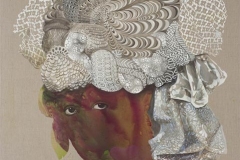 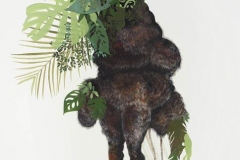 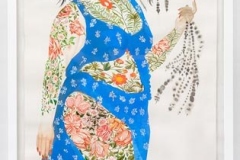 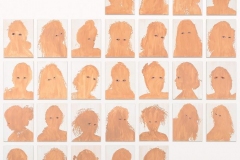 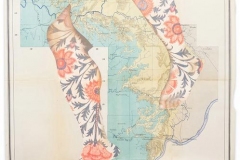 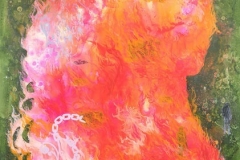 Báez grew up in the Dominican Republic at its border with Haiti before moving to Miami and later to New York City. She brings this hybrid background to her cast of characters. Colorful and strong women infiltrate the male version of history and culture just by appearing in the museum, but the artist adds layers of meaning with mythology, history and cultural references as well as her personal experience. From self-portraits to ciguapas, the female tricksters of Dominican folklore, to Marie Laveau, the voodoo queen of New Orleans, these women assimilate and defy cultural traditions to forge their unique identities, becoming figures of defiance and resistance. They triumph over history as their faces emerge from luscious colors and patterns that almost obliterate their features but also contain symbols of alternative power. Past meets present, private co-exists with public, and different times and cultures collide in a very intelligent mash up.

These larger-than-life women stare boldly at the viewers in images where every detail matters. In the 2017 Oscar-winning documentary, OJ: Made in America, details were just as calculated. For instance, the kente-cloth ties worn by Johnnie Cochran and Carl Douglas, the African American members of the Simpson dream team, were a subtle yet obvious reference to Africa in a trial where race played a crucial role. Racism, whether institutional or individual, is a touchy issue, but the nuances are often lost in the rhetoric. Firelei Báez adds to the discourse with paintings that are a tour-de-force of art, history, and culture in complex and layered forms.

Like the ties in the OJ trial, the elaborate headwraps in these paintings refer to a little-known history in New Orleans during Spanish colonization. The southern city with its polycultural and multilingual heritages and a carnivalesque joie de vivre is a perfect match for Báez’s complex mix. Authorities, trying to maintain what they believed was the natural order, required women of color to cover their hair, a signifier of difference. The women defied the order by making the tignon, with its roots in the West African gele, a fashion statement. The exaggerated scale, the complex folding and braiding, the mix of different patterns in bright colors, and the adornment became a creative symbol of pride as these women flaunted their identity in plain sight. Báez uses these headdresses not only as symbols of identity but also as a surface for intricate and delicate brushwork that encourages close viewing aesthetically as well as content-wise. These tignons are both real and imaginary, made from tropical flowers and fabrics or intricately braided hair.

This is just one example of identity made visible in the show. W.E.B. Dubois coined the term “double consciousness,” in the early 20th century to define the doubleness experienced by blacks in America. They were obviously aware of their own identity, but they also had to be conscious of how they were viewed by whites. Skin color and hair styles were sites of identity, as seen in the work of several current artists ranging from Kerry James Marshall who emphasizes the blackness of his subjects’ skin to Ellen Gallagher who uses ads that promise lighter skin and straighter hair. Báez herself is the subject of Can I Pass? Introducing the Paper Bag to the Fan Test for the Month of June (2011). In daily self-portraits, arranged in an orderly grid, differences in skin color and hair styles are apparent, referencing the tests of the title. If your skin tone was the color of a paper bag or lighter, you could pass as white, and if your hair stayed in place when facing a fan, you approached ideals of beauty in the white world. Still, Báez stares at the viewer, acknowledging the troubling existence of double consciousness.

The way that Báez visualizes these histories is particularly effective. Couched in beauty, meaning is revealed only with close attention to the details. In one section of the Warhol, the paintings hang on walls created to look like aged murals or frescoes with various layers apparent in the pentimenti. Clenched fists, hair picks, fuzzy images of UN peacekeepers in Haiti after the 2010 earthquake, and panthers emerge from the dense patterning on the pock-marked walls, suggesting the subliminal influence of the practices and strategies investigated. This riff on another medium is matched in other works with the use of the silhouette, Chinese ink painting, Indian fabrics, and Persian miniatures, and her content is layered with ideas about the masquerade, the diaspora, the working class and national geographic images.

Báez mixes fiction with fact, dissecting what is considered the truth. She seduces the viewer into looking more closely and thinking more critically. The most intriguing images are the various ciguapas, voluptuous women from Dominican Republic mythology. Female tricksters, related to the succubus, these women are usually beautiful with long hair and backward-turning feet. They can be timid creatures who do good, but they can also be feral females who seduce and cannibalize men. In Báez’s repertoire, they are hefty females covered with symbolic “tattoos” or hybrid, fantasy creations. In the latter, they are part human, part animal, and part vegetation, the lower half of their bodies covered with hair, that problematic emblem of a real body, not the usual idealized form seen in art. Like hairy apes, referencing yet another racial stereotype, these lower extremities morph into tropical vegetation such as lush green leaves or palm trees. Without heads, they are eroticized and exoticized, living in an alternate world. They represent, as do all the women in this show, a visualization of our desires and fears, yet they stare right back at us, with a brazen look seen in Manet’s infamous painting of the courtesan Olympia. That painting was considered so challenging that it had to be protected with armed guards. Both artists give us dangerous women; accepting yet adapting to the reality of their times, they force us to look at ourselves and to acknowledge our own prejudices.