Art in the Trees

Junior high woodworking class is as close as many of us have ever gotten to making something with our own hands. We developed a tactile awareness of the silky smoothness of well-sanded wood and that need to run our fingers over the soft warmth of a finished piece of walnut. 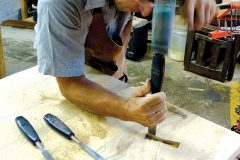 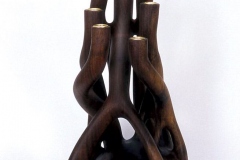 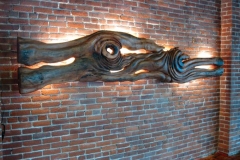 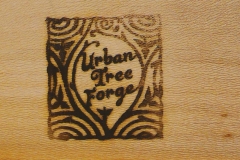 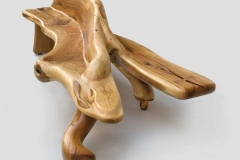 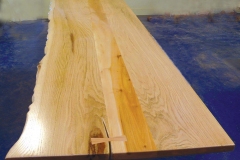 John Metzler never out grew those feelings. He loves wood; wood that has grown right here in Pittsburgh, in our parks, on our hillsides, even in our yards. And he hates to see Pittsburgh’s mature hardwoods be chipped into mulch or go up in smoke. Metzler is the founder and chief artist/entrepreneur of the Urban Tree Forge, a spacious wood shop and studio on Washington Boulevard in Lincoln-Lemington that uses exclusively Pittsburghgrown native woods. He estimates that more than 1,000 trees a year are taken down by Pittsburgh tree service companies. That’s far more potential supply than current demand, and he’s doing all he can to eliminate that imbalance.

Metzler, 46, got his start in the tree-care business as a teenaged second-assistant leaf raker in his older brother Eric’s landscaping service. After a stint in the Marines, John returned and inherited the business, which had lost its customer base in his absence. He took a job with Bartlett Tree Experts, trained as a tree-climber and spent two years, as he says, “learning the physics of trees.”

He’d always loved carpentry and furnituremaking, and the professional tree-climbing eventually led to a business of carpentry and construction. A poster boy for the value of technical education, Metzler used local schools and local teachers to hone his skills. He first took a civil engineering program at the Community College of Allegheny County, spending six years of nights getting his associates degree. The formal civil engineering training led to a job as estimator and manager for jobs as large as 600,000 square feet. His next step was a seven-year, CCAC-based industrial design program.

One requirement was a sculpture class. His teacher, Janese Hexon, rejected his first submission, insisting that, instead of gluing together multiple pieces of wood and carving his design out of a “synthesized” block, he had to find the natural piece of wood that “contained” his design. He found the right log in a debris pile at the construction site for a Robinson mall. Metzler and a friend dragged that wood from the pile with a truck, and his work hasn’t been the same since. Now, the most marvelous and unique organic forms seem to flow out of the huge logs he recovers from downed trees all around Pittsburgh.

While making a living with custom cabinetry, his art pieces began drawing the attention of collectors. He presented his vision to anyone who would listen, from tree-tending groups to municipal maintenance boards. A member of one of those boards was also on the Phipps Conservatory board and mentioned Metzler’s work to Executive Director Richard Piacentini. And it just so happened that two key elements were in place for Metzler’s next step.

Piacentini carried Metzler’s commitment to Pittsburgh a few steps further, believing that Pittsburgh talent and organizations can dream up and produce anything needed to make Pittsburgh a world leader in “green building.” And last September, as Phipps was preparing to host the formal state dinner for the G-20 Summit, Piacentini wanted to demonstrate what Pittsburgh can do and be for those influential politicians. He asked Metzler to make 110 linear feet of world-class tabletops from Pittsburgh hardwoods for the dinner. The only problem? The dinner would take place in 13 days. Metzler accepted the challenge.

The tabletop chapter really began in 2008, when a City of Pittsburgh Forestry Division employee alerted Metzler that many large oaks and sycamores would be coming down in Riverview Park. The landscape company said Metzler could have them if he’d steer some business their way. Metzler hauled his Alaska mill to the yard and the mill, capable of slabbing trees five feet in diameter, ripped the trees into huge slabs. He stored the raw lumber in his shop to dry, then hauled it to a Somerset kiln, drying it further, to the necessary 6 to 8 percent moisture level.

So Metzler had the wood. And he had the skills, space, tools and vision for the tabletop project. But, given the deadline, he needed more hands. He got them from a variety of places. In all, 15 people helped, including his father, Fred, and architect Jason Boone. Artists already renting space in Metzler’s shop contributed in-kind in lieu of rents. And neighborhood volunteers who’d heard of the project came in off the street to help.

The juggling act began—designing the pieces, doing the work (sanding was the biggest part) and managing the helpers and the deadline. And he did it. The tabletops were a great success, drawing considerable publicity to Metzler and his project. He’s shown his work in Cultural District galleries, including intricately carved log-sized wall sculptures and chaise loungues carved from single logs. Now he’s on to other projects, including collecting 40 honey locusts from the renovation of Point State Park.

A Liberal Approach to Business