Temptation lurks in gooey fudge icing layered in a slice of moist chocolate cake and the hot salty crunch of a french fry. The sight and smell can incite the body to ramp up blood pressure, heart rate, skin conductance and salivary response—characteristics of arousal and excitement. It’s a response that Lisa Germeroth hopes to tame as a new approach to curbing obesity, which has defied conventional treatments to remain at epidemic levels in America.

Germeroth, an assistant professor of psychiatry at the University of Pittsburgh, is working on a clinical intervention targeting the memories that form between experiencing the high-calorie food cue and the physical craving response. The idea is to reduce cravings for the high calorie food over time, which could lead people to eat less of it. A similar approach has been effective in addressing substance abuse because of neurological similarities.

Her research underscores why, despite such advances as improved gastric bypass surgery and government initiatives to encourage greater physical activity, nearly 40 percent of adults in the United States and 19 percent of children have body mass indexes greater than 30, which is the threshold for obesity, according to Centers for Disease Control and Prevention data.

Science and government are only now coming to grips with the complexity of the disease that has long been the subject of common misconceptions that simplify its causes and solutions. Beyond how many vegetables a person eats or time spent on a treadmill, genetic makeup, household income, the characteristics of neighborhoods, the products and practices of the food industry and a host of other circumstances are seen as influential pieces of the puzzle that determines whether people struggle with obesity.

“Sure, your body’s energy input has to be equal to energy output, but it’s not as simple as that,” said Iva Miljkovic, associate professor of epidemiology at the University of Pittsburgh. “It’s a disease with many risk factors that not many people know about. It’s not just about a person not exercising.”

The rate of obesity in the world has nearly doubled since 1980. And it remains a problem close to home. Fewer than one-third of people in the seven-county Pittsburgh Metropolitan Statistical Area report being a healthy weight, according to CDC data. The rest have weights deemed unhealthy and nearly 36 percent of them are above the obesity threshold.

Such high rates of obesity are more alarming given the consequences of the disease, which include heart disease, diabetes, infertility and cancers, such as breast and colon cancer. It also carries a stigma, which heightens the risk of depression.

But the way obesity is commonly measured gives an incomplete picture of those risks. BMI, a calculation first used in the 1830s, takes into account an individual’s height and weight. It doesn’t, however, distinguish fat from muscle or where in the body someone stores fat.

And that’s an important shortcoming because the type of fat and where it’s found in excess are critical to determining the health risks it poses. Intra-abdominal fat, or fat stored around the organs, is the most dangerous type of body fat and the biggest predictor of heart disease and certain types of cancers. Subcutaneous fat stored around the thighs, however, has been linked to a lower risk of diabetes and other benefits.

“It’s location, location, location,” Miljkovic said. “That’s the crucial measure. People can have a normal BMI, but they have a lot of fat where it’s not supposed to be and we don’t do anything about it in a clinical practice. When you go to the doctor, you get your height and weight but no one measures your waist. That would be the most simple way to tell if someone was at high risk.”

A waist-to-hip ratio is a person’s waist circumference divided by hip circumference. A ratio greater than 1 percent indicates a higher-than-normal risk for heart disease, according to the World Health Organization. A healthy ratio for women falls under .85 and under .90 for men. 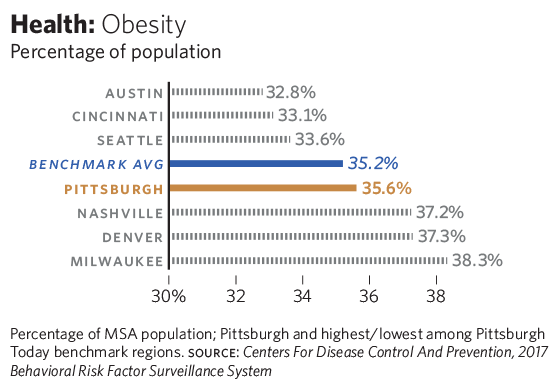 “One of the most upsetting misconceptions is that anyone who is struggling with their weight and is having failed attempts at weight loss aren’t motivated or are lazy,” Germeroth said. “People think that if you have the motivation, you can do it. But we’ve seen that motivation doesn’t translate to behavior change. There are so many factors that go into someone’s weight status that don’t boil down to a person’s personality or their motivation.”

Indicators of obesity have been found in a person’s genetic makeup. Studies, for example, link a variation of the FTO gene to obesity. And the struggle with obesity can start in the womb. A mother’s weight gain during pregnancy, smoking habits and blood-sugar levels have been found to affect her child’s chances of having to deal with obesity later in life.

After children are born, whether they’re breastfed, how quickly they gain weight and how much they sleep all affect obesity risk. But it’s still not clear when during childhood steps to prevent obesity should begin, said Michele Levine, associate professor of psychiatry, psychology, and obstetrics, gynecology and reproductive sciences at the University of Pittsburgh. “We can’t seem to find the sweet spot for when to target the information and interventions for kids.”

What is clear are the grim consequences of letting the disease progress. “One of the scary things about childhood obesity is that we’re starting to see diseases of adults in children. Seeing a 10-year-old with Type 2 diabetes or high blood pressure puts everyone’s mind to spin,” Levine said.

America’s weight problem is further complicated by the influence of social, economic and other factors that lie beyond the reach of health care professionals.

The recognition that obesity isn’t immune from such pressures is changing public health approaches. “The shift that I’ve seen is that we’re doing more work with what might be considered non-traditional public health partners who are working to address social determinants of health,” said Hannah Hardy, program manager of the Chronic Disease and Injury Prevention Program at Allegheny County Health Department. “In particular, we’re working with and promoting organizations that increase access to healthy food.”

Strategies for addressing food deserts have evolved. A food desert is a neighborhood without access to healthy, affordable food. Early approaches focused on bringing a grocery store to the neighborhood to provide an option to the corner market that mostly sells processed food and snacks. “Then we started to find more evidence that it was not just about plopping down a store,” said Tiffany Gary-Webb, associate professor of epidemiology at the University of Pittsburgh. “It’s about how the overall neighborhood is developing, green space and housing development and other aspects.”

She is involved with Green Grocer, a Greater Pittsburgh Community Food Bank program that sends a farmers market on a food truck to low-income neighborhoods and sells fresh foods at affordable prices. It also offers nutrition education, cooking demonstrations and recipes. After six months of being visited by Green Grocer, Clairton residents were eating 20 percent more vegetables each day and people in Pittsburgh’s Homewood neighborhood added 13 percent more vegetables to their diets, according to a 2018 study published in Health Equity.

Access to fresh food was already a concern in Clairton, and the community had begun to mobilize around the issue by the time the Green Grocer arrived. “So when we provided access, people used it,” Gary-Webb said. “Lo and behold, a couple of years later they have a nonprofit grocery store that people advocated for.”

Public health efforts both locally and nationally have expanded to recruit government and businesses in the fight to curb obesity. In Allegheny County, the Live Well Allegheny campaign tries to encourage schools, businesses, restaurants and municipalities to modify policies, food offerings and neighborhood design to promote healthier outcomes for residents.

Whether neighborhoods are designed to promote regular exercise can play a role in the health outcomes of residents. Regular exercise is important to maintaining a healthy weight. Parks, trails, playgrounds and easily walkable communities promote it. The lack of green spaces, sidewalks and safe streets don’t.

One Live Well Allegheny initiative, for example, encourages municipalities to adopt “complete street” policies that better accommodate walking and bicycling. It’s a concept municipalities are slowly catching on to. In 2016, the City of Pittsburgh adopted a “complete streets” policy. Wilkins Township in the east suburbs adopted one a few years later.

But temptation abounds. Television is crowded with advertisements for sugary drinks, sizzling half-pound cheeseburgers with bacon, other high-calorie treats and the establishments that sell them. The widespread availability and promotion of such foods tend to make them part of America’s diet, even as more people are aware of the health risks involved.

In some cases, federal and local government have stepped up to regulate unhealthy foods. In 2015, the U.S. Food and Drug Administration issued regulations to discourage artificial trans fats in processed food. And a few cities, including Philadelphia, tax sugary sodas. “We need to recognize that we need to do more with the food industry,” Gary-Webb said. “The food industry can create change. We don’t see trans fat that much anymore after it was regulated.”

Meanwhile, researchers are exploring new treatments and rethinking approaches that have done little to slow the spread of obesity.

But the complexity of the disease makes it unlikely they will discover a silver bullet and any combination of therapies will include the daunting challenge of altering a person’s eating and other lifestyle habits. “No matter what part of the obesity puzzle you’re trying to solve, all of them come down to some kind of behavior change and that’s still the Wild West,” Levine said.

Must We Gain Weight as We Grow Older?