Seamstress to the Stars

There are fittings on Thursday. Eight costumes still left to make and only two weeks to make them before the first dress rehearsal for The Great Gatsby. And Pittsburgh Ballet Theatre costume designer Janet Campbell is calm. 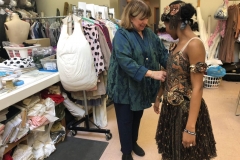 Totally calm, actually. Not a hair out of place. Looking amazingly pulled together, as if the only thing on her schedule is a leisurely lunch with an old chum.

Nothing seems frantic in the costume shop. Even her team is calm. Joanna is measuring and Kristin and Jackie are sewing and Debora is pinning. There are sketches on the wall and tutus neatly stacked, and it’s so quiet that you can hear… nothing. Just the tick… tock… tick… tock… of the hanging clock.

“We still have two weeks,” Janet says evenly as one of the dancers knocks on the door and asks if it’s a good time for a fitting. “I try and remain calm. If I get nervous and frantic, then everyone else gets nervous and frantic. Like, during a performance. If I start thinking, ‘There’s no way this dancer will be able to make a quick change,’ then they’ll think there’s no way they’ll be able to make a quick change, and because that’s what we’re all thinking, they won’t be able to do it.”

Janet has been pinning and tucking and sewing for the ballet for 45 years. She’s made a lot of costumes over the years. “I don’t know… thousands,” she says, adjusting a sleeve. Then once more. Everything on a dancer’s costume has to fit like a glove. It has to be perfect.

“Nobody ever choreographed this,” Janet says, fidgeting. “You can’t be pulling and tugging when you’re on stage. Everything has to fit well.”

After the Fashion Academy of Pittsburgh handed her a degree in 1973, Janet became chummy with some of the stitchers at the ballet. And one day, the ballet needed five Grecian hats for a show they were performing in the park. The stitcher who would normally be making them was taking the day off, and told her boss to call Janet, the one with the “golden hands.” So, Janet got the call. “I wanted the job so bad,” she says, “I made all five hats in one day.”

Which, no one could believe. So soon, Janet was working for the ballet. Pinning and stitching and making this adjustment and that one and wondering why in the world each dancer had 30 pairs of pointe shoes.

“I didn’t have a clue that dancers wore out about two pairs every week,” she laughs. “I was so green.”

These days, dancers drive for hours to get a pointe shoe fitting with Janet. She knows that feet have different personalities (weak feet, strong feet) and how far out you need to place your order if you want them to arrive in time (anywhere from six weeks to 14 months, depending on the maker).

She also knows that there’s not a chance you’re going to walk into any fabric store, whether it’s in Pittsburgh or London, and expect to find the same purple to match the bodice, netting, overlay and briefs of the costume you’re stitching together. So, she learned how to dye fabrics. They do it in a massive, 30-gallon, stainless steel vat that began its life as a soup tureen.

Janet can also paint shoes, create accessories like hair bobs and jewelry, and she knows exactly the type of undergarments that, well, make things work.

Down the hallway from her studio, in a massive, climate controlled, windowless room labeled as “Costume Storage” that she refers to as “The Closet,” are 2,000 costumes. Pink and white and blue and black tutus that look like bagged confetti. Pants and shirts and dresses and skirts that have been cleaned and wrapped in plastic bags that hang from a gigantic conveyor that you’d normally see at the dry cleaner. Costumes for the Nutcracker. Romeo and Juliet. Beauty and the Beast. Giselle… 2,000 costumes.

When Janet goes on vacation, her work goes on vacation with her. “Tinker Bell followed me to Munich. Mr. McTavish’s kilt was made on a cruise to Bermuda.  Three swans were with me at Bedford Springs.  Bathilde was constructed at Camp David, our house near Franklin, PA. Aurora’s wedding tutu was built in South Carolina; this one really entertained the cleaning ladies at the hotel. They checked my progress daily.”