↓ Skip to Main Content
Search
Home › Article › Scrimping to Get By

Scrimping to Get By

Paying their housing costs is a struggle for an alarming number of Americans across the country and Allegheny County is no exception.

Nearly one-third of Americans spend at least 30 percent of their income on housing. The number of households dealing with such costs has risen from 16 million in 2001 to more than 38 million in 2016, a recent Harvard University study reports.

Housing costs of 30 percent or more of household income have historically been considered an indicator of a housing affordability problem. It’s the threshold the U.S. Department of Housing and Urban Development uses to determine families whose housing expenses place them at risk of not being able to afford other necessities, such as food, health care and transportation.

More than 43 percent of Allegheny County residents reported housing costs above that threshold in the Pittsburgh Regional Quality of Life Survey conducted in June by Pittsburgh Today and the University of Pittsburgh University Center for Social and Urban Justice. 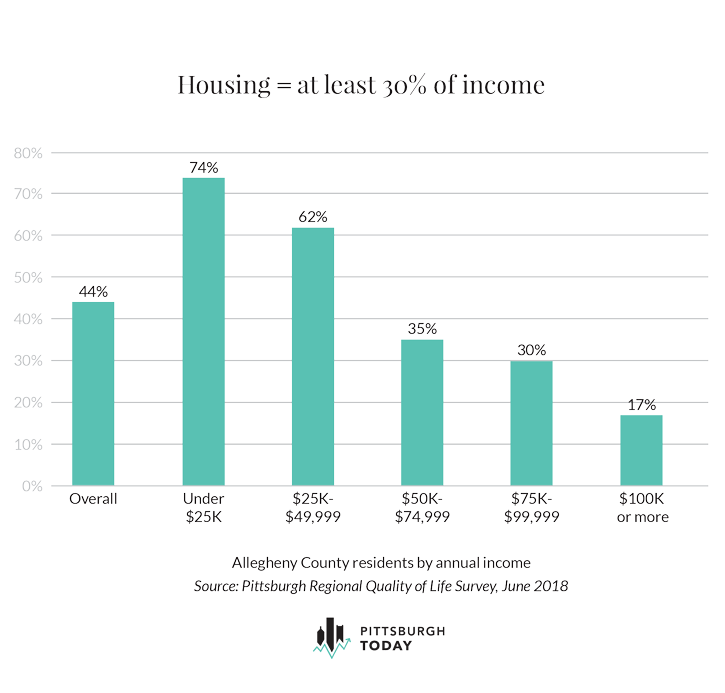 Renters are far more likely than homeowners to have housing costs considered a financial burden. In the survey, 29 percent of Allegheny County residents said they rent and 65 percent own their home. Among African Americans, 52 percent rent, which is double the rate among white and other non-African American residents.

Housing-related financial strain is particularly widespread among African Americans, 64 percent of whom report housing costs that HUD considers a burden. People living in the City of Pittsburgh are also more likely to report spending more than 30 percent of their income on housing.

The poorest households are the most vulnerable. A full 74 percent of households with incomes less than $25,000 a year in Allegheny County report housing costs considered unaffordable. And half of women spend at least 30 percent of their income on housing compared to 36 percent of men.

Age also matters and the problem is most widespread among young adults. Some 57 percent of residents aged 18-29 and 49 percent of 30-44 year olds say their housing costs are at or above the affordability threshold. Less than 29 percent of those 65 or older report that to be the case.

A much narrower gap is seen across education levels. While 49 percent of county residents whose formal education didn’t go beyond high school struggle with housing costs considered unaffordable, having some college or post-secondary education barely drops the rate to 48 percent. And while those who’ve earned a bachelor’s degree fair better, 40 percent still find they’re spending at least 30 percent of what they earn on housing.

Pittsburgh Today and the University of Pittsburgh University Center conducted the Pittsburgh Regional Quality of Life Survey for Social and Urban Research in June 2018. 1,881 Allegheny County residents drawn from the UCSUR Research Registry completed the online survey. Data were adjusted to make the survey sample representative of the demographic characteristics of the county.

Pittsburgh Renters Have Kept up Their Payments—So Far