As a child, my mother often reminded me that we all enter and leave this world the same way. It’s what we do between those two events that will define our lives.

It’s likely that my mother, Edith Beale, wasn’t much different than other mothers raising families in and around towns lining the valleys of Pittsburgh’s three rivers. Her priorities were unmistakable: Faith, Family and Service.

For much of my life as a photojournalist I’ve documented the lives of others. It wasn’t until I scrolled through hundreds of images captured on my iPhone that I realized that my mother’s life over the past five years was also a story I needed to tell. 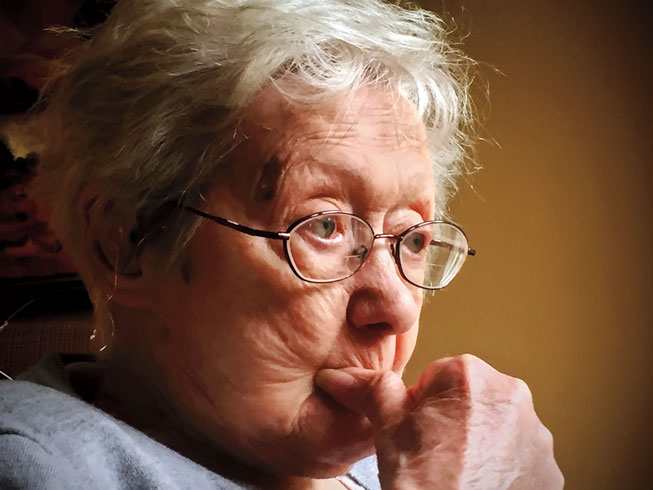 Our modest three-bedroom home was your castle. The rooms were spotless. Everything was organized and neat. The expansive yard and garden were sources of pride. Downsizing to an apartment was traumatic; you liked the familiar. The chaos of moving day was very difficult. But later, deciding to move from the independence of your own apartment to personal care was even more difficult. I had called your apartment and there was no answer. It wasn’t until I called the volunteer fire department that I learned that, earlier in the day, paramedics had transported you to the hospital after a fall. You didn’t want us to know. You never wanted us to worry. 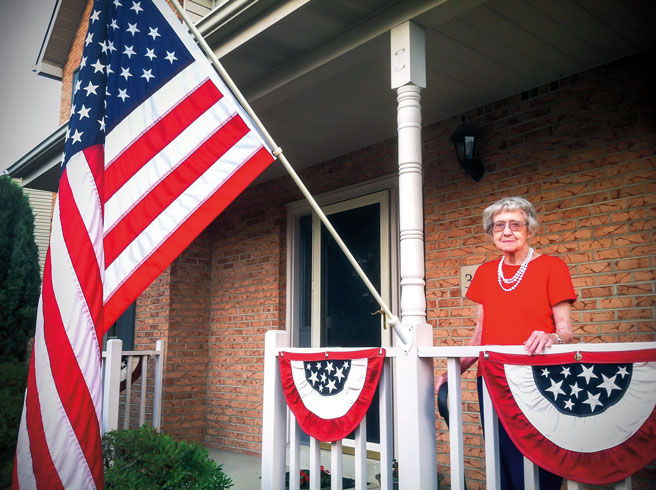 You were 91 when this photo was taken at one of our July 4 family gatherings. You drove to the picnic in Plum Borough with a Tupperware container of your popular potato salad carefully packed in ice in the trunk. Potato salad was your specialty. We took it for granted that it would always be on the table at our picnics. We never thought to ask for the recipe. Reading the daily newspaper was a ritual and a passion. Your television was rarely turned on. When the Valley News Dispatch was no longer delivered in Oakmont, reading a different paper was like getting to know a stranger. It was just one more unwelcome change. 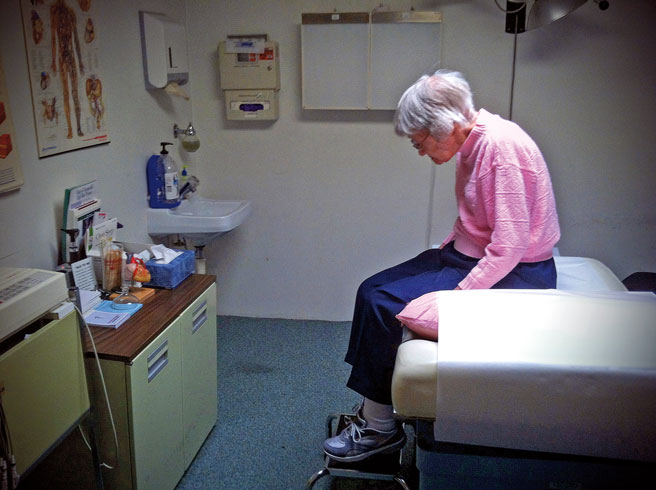 You loved Dr. Suwan. He always spent time with his patients. He doctored you through some difficult times. You told him he wasn’t allowed to retire until after you died. You insisted to always go to Allegheny Valley Hospital where he made rounds. We learned Dr. Suwan had retired when you were admitted to the hospital for the final time. The clock read 3 a.m. when the nurse called to say that you had fallen. I rushed to the hospital and it was a paramedic who told me that the fall happened during a fire drill. I felt sick when the ER physician said you had suffered fractures in your neck. Many people your age never completely recover from that kind of injury. You lived with the pain, and you accepted the adversity. What you survived during your lifetime was remarkable. 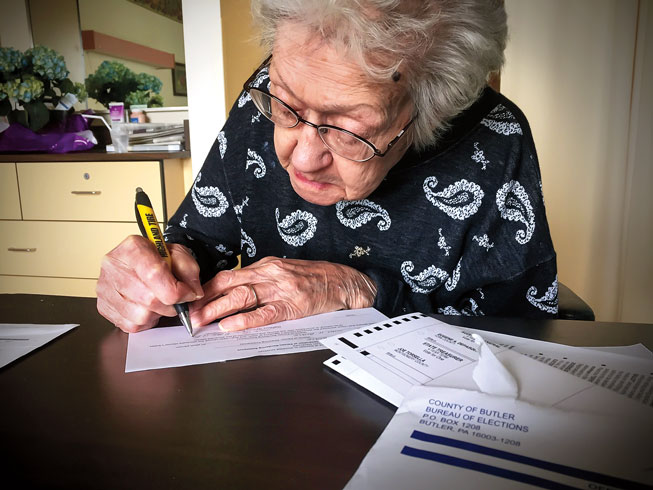 I know how proud you were to have voted in every general election for 59 consecutive years. It would have been 76 years, but in 1957 you were in the hospital having me. I didn’t know there was a PA Voters Hall of Fame until the notification arrived saying you were part of the relatively small group of PA voters who had voted for 50 years. After you passed, we received a sympathy card that made me smile. It read, “She will always be my voting inspiration.” 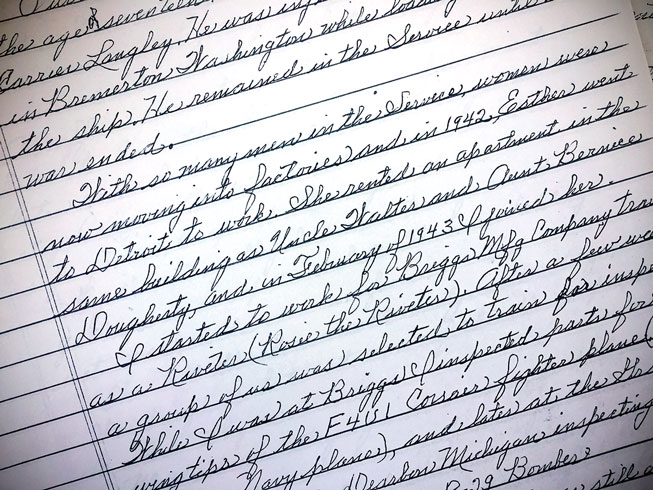 Sometimes we discover too late that one of the best gifts that a parent can give to their children is a family history. When you were no longer able to remember details as well as in the past, we urged you to make notes about your childhood and our family. Months later you presented me with 24 beautifully hand-written pages of recollections about your life. I’ve sent them to your sisters and other close relatives. 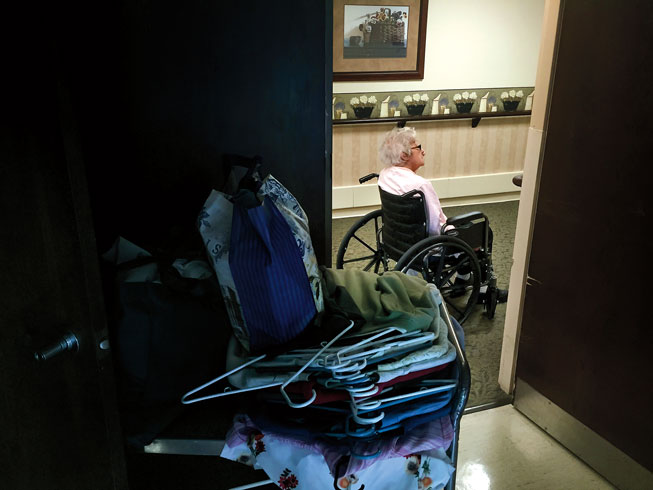 A promise I couldn’t make

With every injury from a fall came a rollercoaster of emotions. There were the hospital stays, often followed by a brief admission to a skilled care nursing facility for rehabilitation. This photo was taken as you were waiting to return to personal care after a stay at the nursing home after a fall. We were waiting for a cart to move your clothes back to your room in the adjacent building. You were emotional when you said that you never wanted to move again. I knew that was a promise I couldn’t make. You insisted on being independent. Living with one of your children was out of the question. The Great Depression, World War II, raising five children, and Dad’s death from cancer in 1970 were difficult. You learned to do things on your own, balancing a job and motherhood. During my twice-weekly visits to the nursing home, you never wanted to bother anyone. It didn’t matter that there were caring people who were willing to help. 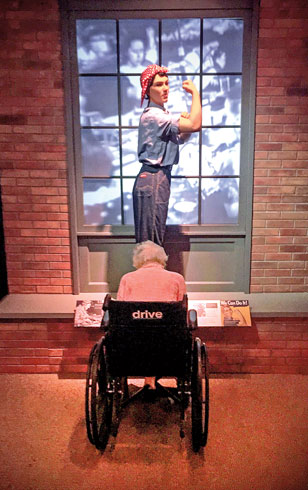 Seeing the “Rosie The Riveter” display at the Heinz History Center’s World War II exhibit brought mixed emotions. You were introduced as a “Rosie” to school children on a tour of the museum. The symbol of strength and perseverance for women during World War II was a distinct contrast to your frail and tiny frame hunched over to read the history you were once a part of. Not long after you met Dad, he left to serve with the Army in World War II. Women like you were recruited to support the war effort at home. You and your sister moved from Pittsburgh to Detroit to work in an auto plant that was converted to build warplanes. You often talked about your work on Corsair fighter planes and B29 bombers. Long after the war ended, your life still embodied the “We Can Do It” spirit. 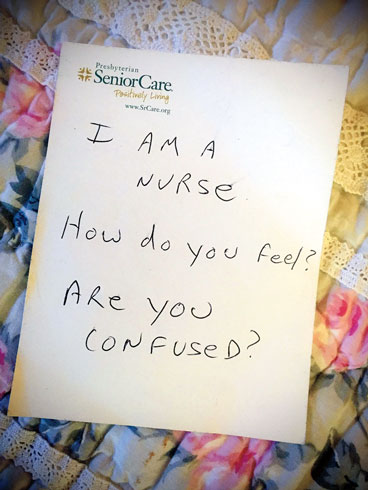 Notes like this one were an indication that someone new was helping with your personal care. Your doctor once told me that your most significant health issue might be your hearing. It affected you since you were a young girl and an ear infection took most of your hearing. You believed that people felt uncomfortable when you read lips, and I know that made you feel awkward in social situations. Your latest hearing aid seemed to help, but your hearing was extremely limited. Some of our most stressful times came when your hearing aid was damaged, lost or misplaced. It was hard to imagine you not having the strength to walk down the hallway. Walking and dancing seemed effortless for most of your life. We often talked about how physical therapy sessions were painful. The new normal became celebrating when you walked 50 feet without assistance. I tried to realize how frustrating it must have been. At 92, you were still driving to the Giant Eagle for groceries. We disagreed about whether it was time to quit driving. At 95, you had no car but still had a current driver’s license. You were convinced you gave up your car too soon. I assured you that you still had a license and were welcome to drive my car anytime. You seemed to accept that, but I’m thankful you never took me up on the offer.

It was always on my mind as I drove to the nursing home. Would this be the first time that you wouldn’t recognize me? 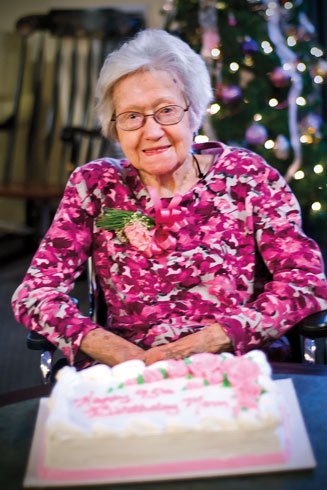 Your 95th birthday party was a wonderful day. All five of us children; most of your grandchildren; and your great-granddaughter were there. The lounge at Westminster Place was decorated beautifully for Christmas. We brought the cake, ice cream and presents. We celebrated the day without a thought about how challenging the next year might be. 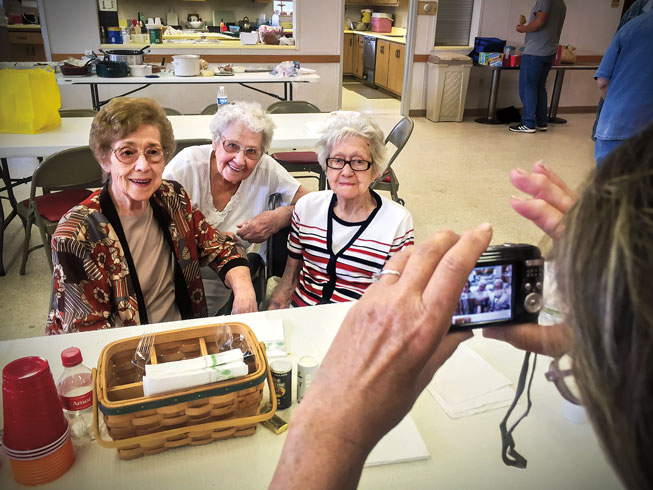 The family reunion on August 6 of last year was difficult. You were so much a part of the day. The Lewis reunion was a highlight of your year. It gave you an opportunity to spend time with your sisters. I wish you could have visited with them more often. It’s easy to think that there’s always tomorrow. 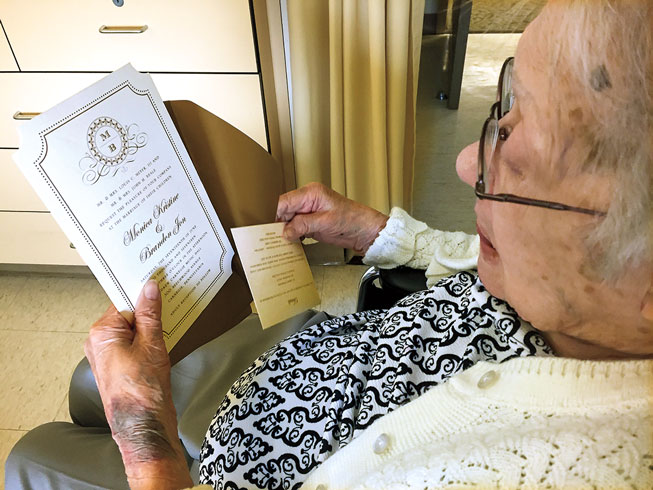 Brandon and Monica wanted to be sure that their wedding invitation, addressed to you, didn’t get lost or misplaced. That’s why they sent it to our home so I could deliver it to you in person. Plans were in place for you to attend your grandson’s wedding. When I gave you the invitation, you read the date aloud several times. “June 17.”

You talked about what you would wear. There was no indication that, eight days later, you would be gone. 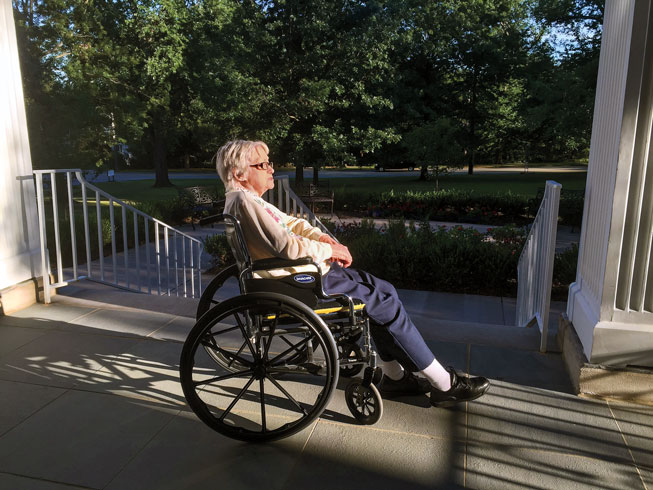 The sunshine. We loved those days with sunshine. Some days I pushed you around the flower gardens at the personal care home. Other days we sat on the porch until the sun set behind the trees. There was a terrible storm in Indiana County as I drove along Route 22 from State College to see you at the hospital in Natrona Heights. It was a blinding thunderstorm that made me wonder whether I should pull over. A few hours earlier, following your physician’s recommendation and conversations with your other children, I had faxed the paperwork that admitted you into hospice. The doctor estimated that you would live only 4-5 days. Passing through Blairsville the sky began to brighten, and I saw this amazing rainbow in my rearview mirror. Moving from a storm into sunshine wasn’t a coincidence. You had been suffering, but there would be better days ahead. We were with you round the clock in the last few days, and I was with you when you passed early Sunday morning, April 30. 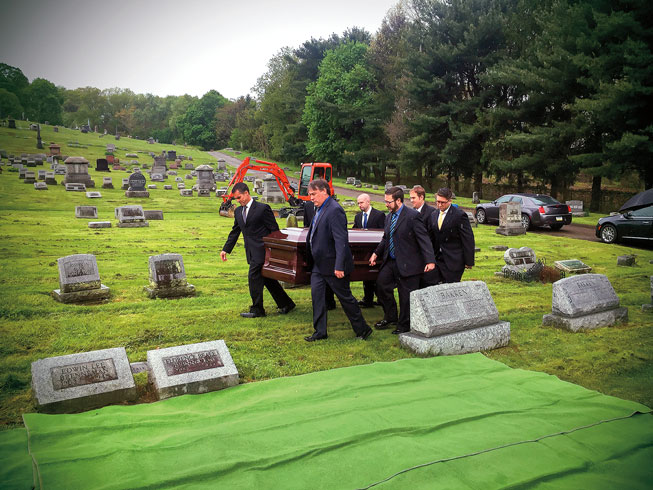 I can’t begin to tell you the love we felt from everyone who came to your viewing at the funeral home. Friends and relatives drove from near and far. You made the decisions about your funeral a decade earlier.

Your casket was placed in the chapel at Freeport United Methodist Church, not far from the room where you taught Sunday School for many years. The eulogies by Reverends Sally and Dawn Lynn were fitting: Faith, Family and Service. Your grandsons and nephew served as pallbearers. As they carried your casket from the hearse to your final resting place next to Dad, there was a light drizzle. But soon the sky cleared.