Poverty remains a stubborn problem for most regions in the United States and southwestern Pennsylvania is no exception.

The rate of poverty in the seven-county Pittsburgh Metropolitan Statistical Areas remained relatively stable in 2015 at 12.3 percent of the population, according to U.S. Census Bureau American Community Survey data.

Poverty is defined by federal income guidelines that are adjusted every year. The poverty line for 2016 is an annual income of $24,300 or less for a family of four and $11,880 or less for an individual. 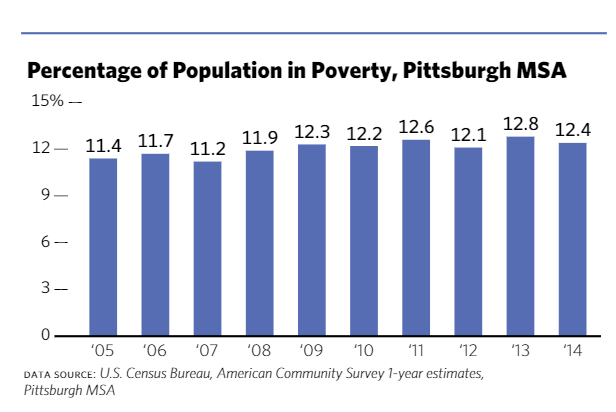 Poverty may be blind to race and ethnicity, but in U.S. metropolitan regions such as Pittsburgh, minorities are more likely than white residents to be poor. In the City of Pittsburgh, for example, nearly 36 percent of African Americans live in poverty – more than double the rate among whites, Census Bureau data suggest.

Some 28 percent of African Americans in the city also report often or always having difficulty paying monthly bills for housing and other basic necessities. Only 2 percent of other races confess such hardship, according to the Pittsburgh Regional Quality of Life Survey conducted by the University of Pittsburgh’s University Center for Social and Urban Research.