Right now, Rudy the Doodle is on the grooming table. Mary is giving him the Full Groom. “Everything,” she says, snipping away at his curly, toffee colored fur with a pair of Japanese shears, which are also her favorite kind. Snip. Snip. Snip. 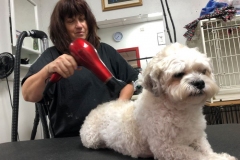 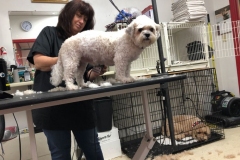 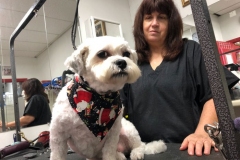 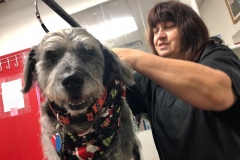 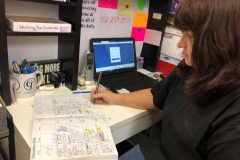 Rudy’s very calm and composed and just hanging out on the Comfort Groom mechanized table. Not like the other Golden Doodle that was just here. Who is old and cranky and tends to be a biter and requires two people to hold him while Mary snip snips.

Mary ran a printing press for 25 years. But technology was changing. Machinery was changing. “I was basically becoming a dinosaur,” she says. So, she took advantage of a government re-training program. One of the things they offered was dog grooming.

“I had no idea how hard it was going to be,” she says. “I had a vision of running through fields like, ‘Yay! We’re gonna get our hair cut!’”

In between classes, during lunch, she’d read the wanted ads in the back of dog grooming magazines. One of them kept popping up every month for Larry’s Laundromutt. Dog groomer needed in Sewickley, Pennsylvania. “I said, ‘I’m gonna go over there and talk to Larry. I didn’t know Larry was a dog! I thought I’d be talking to a man.”

She’s been here since 2010. And from time to time, Larry—a lab mix—will make an appearance while Mary’s at her station grooming dogs like Rudy the Doodle. “Come on sweetheart,” she says, lowering the table and leading him over to a crate. “Come in here and wait for your mom.”

There’s a stack of bandanas neatly folded on top; fabric she gets from Hobby Lobby and cuts herself. They’re usually themed, usually seasonal. Right now, it’s Santa and some weird, geometrical shape that she doesn’t really like and doesn’t really know why she bought. Rudy gets a Santa.

And Archie, a very quiet Shih Tzu and Bichon mix, will get a Santa bandana too, once he’s done getting his full hair cut and nail trim.

Archie is the sixth dog Mary has groomed today. Six in seven hours. Tomorrow is a longer day. Probably seven or eight dogs. Her schedule is filled with one appointment after another and then a few more. She grooms on Sundays and Mondays at the Laundromutt, and then gets behind the wheel of the Laundromutt’s mobile grooming station on Thursdays and Fridays, bringing all the snip snipping to your front door.

“It’s tiring,” she says. “And I’m not young, either. I’m 58, which is why I only work four days a week now. I used to work five.” Snipping and clipping and trimming and making the Rudys and the Archies of the world looking and smelling good again. Which can be a job. Like when one of them tangos with a skunk.

And it’s really bad when people aren’t taking care of their dogs, when they don’t comb them or wipe their eyes and expect Mary to make a miracle happen with a bunch of wild, matted fur. We don’t have a magic wand back here. The owner has to do their part, too.”

On the mirror at her station is a photo of her dog, a beagle named Beauford. She has a coon hound and a Lhasa mix, too. She likes the hounds the best. They don’t require grooming. “The last thing I want to do when I get home is groom,” she says, grabbing the Andis two-speed dog clippers. She’s tried all different kinds of clippers. But keeps coming back to these.

“Someone’s here to get Rudy,” one of her co-workers announces. While someone keeps an eye on Archie, Mary puts the clippers down and retrieves the Doodle from his crate to reunite with his mom. “It’s a hard job, but I like it. I like spending the day with dogs. It’s good company.”