How Healthy are Allegheny County Residents?

In their own view, people in Allegheny County are generally healthier than the nation’s population. They’re also smoking less.

Only 16 percent of county residents overall described their general health as fair or poor in the Pittsburgh Regional Quality of Life Survey conducted in June. Nationally, 18.4 percent of Americans say they’re in fair or poor health, according to Centers for Disease Control and Prevention data.

The county rate hasn’t budged since 2011, when the survey was previously taken, although fewer people living in the county today grade their health as excellent or very good than they did back then.

Everyday smokers and those who sometimes smoke are seeing their number dwindle. Only 8 percent overall say they smoke cigarettes everyday, for example, when seven years ago they made up 12 percent of the county population.

Such self-reported health rates, however, depend on whom is being asked.

Take smoking, for example. More than 23 percent of African Americans smoke. The rate among non-African Americans is less than half of that—11 percent. Only 4 percent of county seniors smoke cigarettes, while more than 18 percent of 45-64-year-olds haven’t given them up. The highest rate is found among people earning $25,000 a year or less, 24 percent of whom smoke. 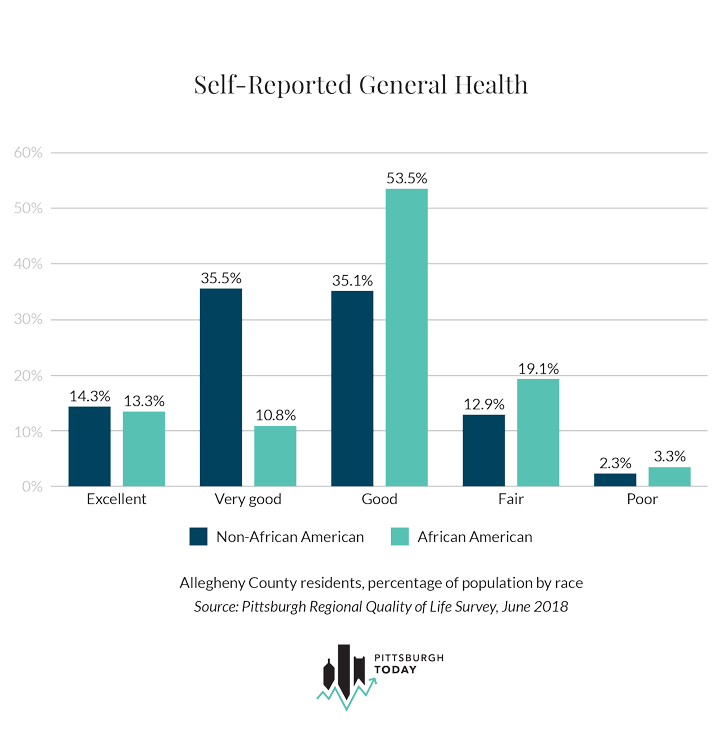 The gaps are even wider when household income and level of education are the measures. When, for example, residents earning less than $25,000 a year assess their health, 31 percent describe it as only fair or poor. That’s nearly four times greater than the rate among those earning $75,000 -$100,000. And nearly 65 percent of people with graduate degrees say they’re in excellent or very good health—a level of physical and mental well being enjoyed by only 35 percent of people whose education extends no farther than high school.

Pittsburgh Today and the University of Pittsburgh University Center for Social and Urban Research conducted the Pittsburgh Regional Quality of Life Survey in June 2018. 1,881 Allegheny County residents drawn from the UCSUR Research Registry completed the online survey. Data were adjusted to make the survey sample representative of the demographic characteristics of the county.