High school graduation rates are improving in southwestern Pennsylvania overall. Yet, in a handful of districts, nearly a third or more students fail to graduate on time.

Dropping out or otherwise failing to earn a high school degree robs students of opportunity and puts them at greater risk of being unemployed or working low-paying jobs. And without a high school diploma, they are less likely to achieve a higher level of education.

The aggregate four-year graduation rate for the 132 school districts found in the seven-county Pittsburgh Metropolitan Statistical Areas improved slightly from 89 percent of students in the 2010-2011 school year to 90 percent in 2013-2014, according to an analysis of Pennsylvania Department of Education data by Fourth Economy, a Pittsburgh-based economic development consultant.

In general, the state uses a methodology that calculates graduation rates based on the percentage of students who graduate within four years of entering high school. It also tracks the status of students and accounts for those who transfer in and out of schools and districts.

Few regions have a higher rate of residents with at least a basic education than southwestern Pennsylvania. In 2015, only 7 percent of the Pittsburgh MSA population did not have at least a high school diploma or GED, U.S. Census Bureau data suggest. Among the 15 Pittsburgh Today benchmark regions, only Minneapolis-St. Paul has a lower rate of people without a high school degree. 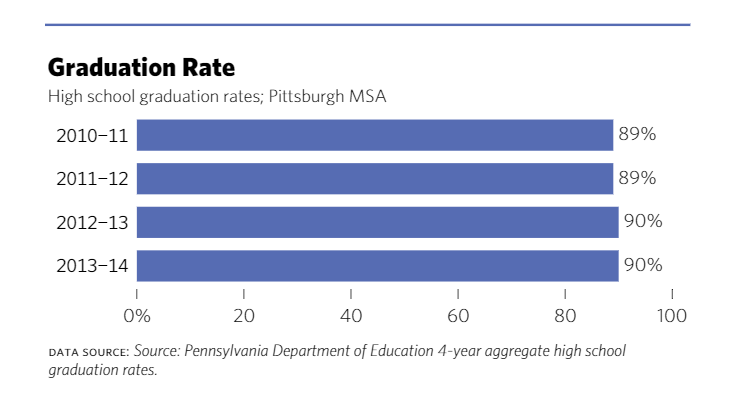 Not surprisingly, graduation rates for some school districts are much higher than the regional average and rates for others are significantly lower.

Graduation rates in 26 school districts were below 85 percent in 2013-2014, state data show. Of those districts, nine had rates of less than 75 percent, including three districts where fewer than 70 percent of seniors graduated on time.

Data also suggest minorities overall are less likely to graduate high school on time. For example, the graduation rate for African American students was below the median rate for the region in all but 50 of the region’s 132 school districts in 2014. The graduation rate among Hispanic students was below the median in all but 57 districts.