Allegheny County residents are tough graders when assessing the performance of the public schools that educate 115,000 county children in grades kindergarten through 12, a far-ranging survey of their views on education suggests.

Fewer than half give schools a better-than-fair rating for their class size, funding, student preparedness, parental involvement and diversity of the student body. But on one of the most critical aspects of education, well more than six in 10 county residents describe the quality of instruction in local public school classrooms as ranging from good to excellent.

The survey, conducted by Pittsburgh Today and the University Center for Social and Urban Research at the University of Pittsburgh (UCSUR), explores their perspectives on education issues and policy as well as their views on the performance of schools in southwestern Pennsylvania’s most populous county.

They have doubts, for example, about the usefulness of state-administered standardized tests and the quality of education that home schooling offers. More career technical education tops their wish list for their local public schools. They overwhelmingly value early childhood education and advocate for it to be part of every school district. And they widely endorse giving families greater choice in the schools their children attend.

Nearly 2,300 Allegheny County residents took the online survey in October. They were identified from the UCSUR Research Registry and data were adjusted to make the sample representative of the demographic characteristics of the county.

Their responses offer the broad perspective of the county as a whole, as well as insight into how race, household income and whether people live in the City of Pittsburgh or the suburbs tend to color their views and experiences.

Most Allegheny County residents agree that the amount of money spent on schools influences the quality of the education they offer to students. Only 5 percent of residents don’t believe that funding affects quality.

An overall majority of residents feel that funding for public schools is adequate, while four in 10 believe they are underfunded. Athletic programs and facilities is the only line item on which a majority of residents favor cutting if education spending has to be reduced. Meanwhile, at least three in four residents oppose spending cuts for buildings, transportation, school personnel, after-school programs, and art, music and library programs.

Residents are more willing to make changes that improve their public schools. More than eight in 10 favor more art and music instruction, as well as more technology-based education, such as adaptive learning software and maker spaces, and more career technical education opportunities, such as auto repair and culinary arts training.

And more than eight in 10 residents agree that education funding in Pennsylvania should be equitable for all students, even if that means taking money from some wealthier school districts and investing it in ones with leaner resources.

County residents, for the most part, hold favorable views of their public school teachers, the quality of their work and even the unions that represent them, the survey suggests.

Teachers greatly influence the quality of education students receive their classrooms. And 64 percent of residents rate the quality of instruction in public schools as either excellent or good. Only 5 percent describe it as poor. 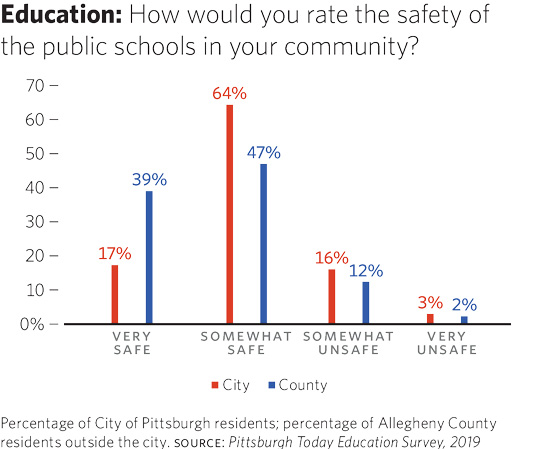 Allegheny County is of one mind about early childhood education.

More than 85 percent of residents think it is very important, while less than 2 percent don’t think it is important at all. And a whopping 88 percent think all public school districts should offer childcare and early childhood education.

About 6 percent of residents surveyed have preschool-aged children. Responses suggest that more than 60 percent of those families regularly use childcare. Families in the City of Pittsburgh are twice as likely as those in the suburbs to do so. And the type of care they rely on is equally split between family members and professional caregivers.

County residents are wary of using statewide-standardized tests in education. More than half, for example, feel the emphasis placed on the tests is inappropriate.

But 82 percent feel the tests should not be used to determine the funding that schools receive. Nearly 62 percent say they shouldn’t be used to rank schools and more than half believe they shouldn’t determine whether students are promoted or graduate. Only 56 percent believe the state’s standardized tests are accurate measures of a student’s progress and abilities.

County residents widely embrace school choice, with more than 70 percent favoring greater school choice as a way to improve public schools. But their support isn’t unconditional. They generally have a dim view of home schooling. More than half of residents overall believe the quality of education for home-schooled children is worse that what they’d receive if they attended school. Only 22 percent think it’s better.

And while they tend to support giving families greater choice in schools, they’re much less inclined to provide vouchers to help families pay for the alternatives. Only 45 percent favor school vouchers. Views on issues of school choice, however, are greatly influenced by the race of respondents.

African Americans in Allegheny County more widely favor giving parents vouchers to help pay for educating their children somewhere other than their local public schools. Some 60 percent favor the concept of vouchers; only 43 percent of other races favor it.

African Americans emerge as the strongest supporters of school choice. Asked what changes they favor to improve their local schools, 91 percent said giving them a greater choice in the schools children attend, an idea that 67.5 people of other races favor.

African Americans are much less satisfied with their local public schools than people of other races. They’re at least three times less likely to describe the class size and diversity of the student body in public schools as good or excellent. They’re about twice less likely to give schools high marks for safety, educational standards, funding, parental involvement, student behavior, student preparedness and administration. And they are three times more likely to rate the educational standards and technology and innovation in their local schools as poor. 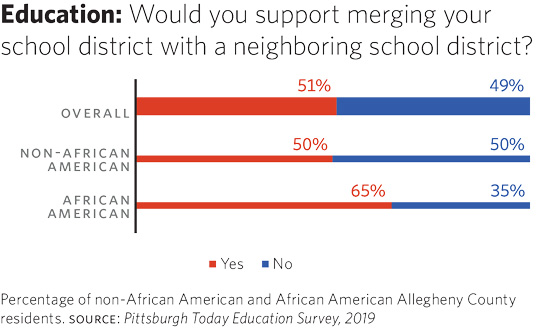 School safety is one example. Overall, more than eight in 10 county residents feel their local public schools are safe. But 24 percent of residents earning less than $25,000 a year say their schools are unsafe, making them three times more likely to have such concerns than those with incomes of $100,000 or higher.

Residents with incomes under $25,000 rate nearly all aspects of their local schools less favorably than those who earn more, especially when compared with the highest earners. Only 27 percent, for example, rate school funding as excellent or good compared to 61 of residents in the highest income bracket.

At least six in 10 residents earning between $25,000 and $50,000 a year fail to give schools better-than-fair marks for class size, student diversity, parental involvement, funding, administration and the quality of their school board.

City of Pittsburgh residents have markedly different views of certain issues than suburban residents. More than 60 percent of city residents, for example, feel the funding for the Pittsburgh Public Schools is inadequate, while only 26.5 percent of suburbanites believe their public schools are underfunded.

One thing residents of the city and suburbs have in common is a lack of engagement in the governance of public schools. For all of their concerns, only 8 percent of city residents and 12 percent of those outside the city have, in the last two years, attended a school board meeting, where decisions that influence the quality and future of their public schools are made.