↓ Skip to Main Content
Search
Home › Article › From Pittsburgh to Venice, Through the Looking Glass

From Pittsburgh to Venice, Through the Looking Glass

Maybe my 6th or 7th Biennale. I can’t remember anymore. The art, the parties, the timeless beauty of this most impractical, magical city blurs my vision, my memories. 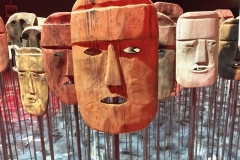 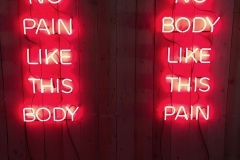 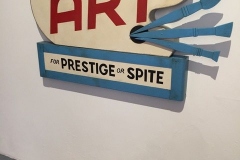 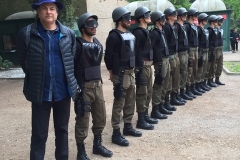 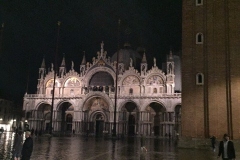 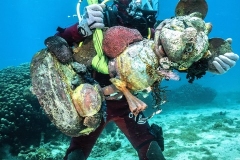 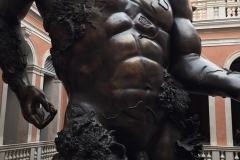 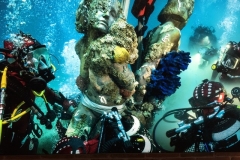 The Bellini, the Prosecco, the Aperto spritzes, the Veneto wines, the dinners and endless exotic hors d’oeuvres, the European glitterati and the Who’s Who of the current art world blend to a background of Café Florian musicians. The sun sparkling off the golden mosaics of San Marco, the omnipresent waterways, the latest designer sunglasses, the polished shop windows displaying the world’s most precious brands: blindingly overwhelms.

The Chinese seem strong this year, perhaps overtaking the Russians. But perchance the quiet Belgians are outspending them both. Americans seem underrepresented during the festive five days before the most prestigious art event in the world opens to the general public. The French, as usual, make themselves known and the Germans are rightfully proud of the top two Golden Lions they received this year for best pavilion and best artist.

Peppered among the major countries are representatives from Nigeria, India, United Arab Emirates, Zambia, Syria, Cambodia, Armenia, Cuba, Azerbaijan, Chile, Albania, Japan, Brazil, Mali, Kiribati, Iraq, Mauritius, Peru, Tuvalu and on and on. There are even representatives from an Antarctica expedition (where no humans live)!

Christine Macel, the curator from the Pompidou Museum in Paris is this year’s curator. Her theme is Viva Arte Viva.

It has something to do with understanding and celebrating life through art. It is “designed with artists, by artists and for artists about the forms they propose, the questions they ask, the practices they develop and the ways of life they choose.”

If I had to put it into a word, that word would be Humanism.

Very personal and direct, while also extremely obtuse and complicated (to my still jet lagged mind), viewing the work was akin to channel surfing through thousands of visual stimuli, while being assaulted by a Tower of Babel of VIP’s, world journalists, artists, curators, dealers and museum directors.

As a gallery owner, perhaps more knowledgeable than most, it is still all I can muster to just wander on, aimlessly. It’s like reading a book, opened randomly to pages, with juicy parts possibly exposing themselves on every turn.

In the Arsenale and the Italian Pavilion at the Giardini, the curator has invited 120 artists, 103 of them for the first time. Unlike Art Basel Miami, there are no prices, no provenance of dealer or lender, no subtle way to “assess” the values. No clues as to whether we should “ooh and awe” or “tsk and tat” about the work. The curator has bravely chosen them for the “gestalt” they produce, the entirety they embrace.

In addition, 86 countries have chosen representatives that concur to create the pluralism that is the trademark of La Biennale. Thirty are in the Giardini, in national pavilions. Others are scattered around Venice, in churches, palazzos and holes in the wall. In addition there are collateral events and private exhibitions galore, sponsored by anyone willing to pay for the zing of the thing. Every night at the Peggy Guggenheim Museum is another sponsored dinner or cocktail party. The Danielli, the Monaco, the Cipriani, the Bauer, all are booked out for private parties. Good luck finding a table at Harry’s Bar. But in the orgiastic art feeding frenzy, all you need do is dive in anywhere, up any alley way, steer your water taxi driver towards the lights on the Grand Canal, and until 5 in the morning you will be feted and entertained in the most diverse situations imaginable.

During the Venice Biennale preview week, you are cast as a star, under the (orchestrated?) full moon. Water laps at your expensive shoes on Saint Marco square. Throw them off. Get wet. Art is the religion du jour. Laugh and play and perhaps contemplate why, after next week, the art crowds dwindle and the energy dissipates back to a slow trickle of conscientious observers.

Tracey Moffet is the first aboriginal Australian to represent her country’s pavilion. Her film shows looks of horror on the likes of Liz Taylor, Cary Grant, Debra Carr and a suite of other icons juxtaposed with refugees stuffed onto boats or drowning, capsized in the ocean.

Mark Bradford, a black, gay artist who obviously doesn’t feel a part of the American dream, especially today, represents the United States with Tomorrow is Another Day. He uses all recycled materials to transpose the classical American pavilion into a thoughtful and elegant political statement. His imposing bulging hanging art in the entrance is made of nearly unreadable mulched immigration forms. Garbage strewn outside might be part of his statement, but a pile of discarded champagne glasses might just as well been left over from the opening.

Anne Imhof creates a hauntingly provocative pavilion of trapped dancers under a glass floor. Germans rarely escape the angst of the holocaust, and this year’s Golden Lion winner was no different, evoking complicity in S&M dungeons, littered with dirty sinks and bars of soap and even accompanied by Faust. Fenced fierce Dobermans guard the entrance.

The French artist, Xavier Veilhan, transforms their pavilion into a Merzbau modernist recording studio, complete with unscheduled performances from any and all callings. I observed an opera accompanied by piano, but musicians from all horizons will perform on many instruments, some made especially for the exhibition.

Israeli Gal Weinstein makes biblical reference to stopping the sun in the sky. His installation transfigures coffee grounds, mold, cotton-like clouds and explosions into either an apocalyptic end or the momentous beginning of God’s finger creating Adam.

Rachel Rose had the most beguiling video in the Central Italian Pavilion. “Everything is Not What is Fully on the Surface” is a dreamlike vision of a lake valley with a furry (rabbit, fox, cat, puppy?) creature beseechingly searching for a friend. The sad metaphor touches deeply into our melancholic psyche. In the final pan out, the creature rests in a tiny urban garden, surrounded by endless commercial sprawl.

For all the concern from the pious art insiders for the tragic plight of the refugees streaming into Europe from all over the world, for the horror at the rise in governmental Fascism, it must still be noted that if all the extravagantly priced handbags, scarves, designer eyewear, luxury watches, first-class travel and accommodations, jewelry and outrageous dinners were forgone, it would amount to many tens of millions of dollars that could change millions of lives.

Alas. Life is not fair and I am just another pig at the trough.

In a not-too-ironic twist of fate and some very intricate planning, the most engaging and successful draw of Venice this season is a grossly commercial undertaking by the over-the-top art rock star artist we love to hate, Damien Hirst.

Hirst actually stole the show without even being included in the official Biennale. Through his complicit billionaire collector Francois Pinault, owner of Christie’s Auction House and Gucci, Hirst staged two humongous exhibitions at the Palazzo Grassi and the Punta Della Dogana (both owned by Pinault). They cost many many millions of dollars to produce. His self-aggrandizing theme was as far afield from recognizing social injustice as one can imagine. The vast commercial oeuvre of over-indulgence overflowed with crass possibilities of opulent purchases designed to expand his and Pinault’s own coffers.

His tour de force show is entitled “Treasures from the Wreck of the Unbelievable” (Apistos in Greek) and focused on an imaginary shipwreck containing 100 fabled treasures from all corners of the second century CE world. It foundered off the coast of East Africa somewhere in the Indian Ocean. The collection, owned by a freed slave from Antioch (north-west Turkey), Cif Amotan II, had been en route to a museum built especially to house it.

Tongue-in-check all the way and narrated with a proper British accent, these encrusted objects, carefully planted and re-raised from the ocean depths, represent mythical, magical, silly (Goofy and Mickey Mouse), grandiose (an 80-foot headless colossus in bronze) and priceless objects more than comparable to Gucci Handbags, Prada Shoes or Patek Philippe watches. It is less than discreetly known that they are for sale in three different versions in editions of three with two artist proofs of each.

While the horror of Damian Hirst’s ego-generated absurdity and the market manipulation of Pinault and the fat cat dealers completely clashed with any socially responsible message of the Biennale, the works are demonstrably memorable and sadly will remain viable for as long as the sordid politics of the world and the plight of the refugees.

These imagined treasures, like the once only imagined city of Venice, will, by all accounts, become future reality.

Now back safely in Pittsburgh after the nine-hour flight and the inefficient horror of customs and immigration and security checks in Philadelphia, I will sit down soon with the catalogue and the stack of brochures, sip a coffee or three and peruse what I missed (which in reality, equals as much as I saw).