Bird counts in the Pittsburgh area have improved in recent years and limited data suggest that fresh water mussel populations are also doing well – two encouraging trends that offer insight into the health of the region’s ecosystem.

Data from the annual Christmas Bird Count organized by the Audubon Society of Western Pennsylvania show generally improving trends in bird populations within a 15-mile radius of the City of Pittsburgh since 2010. During the 2016 Christmas bird count, for example, 74 species were spotted. The 10-year average is 69 species sighted.

Some bird species are outpacing others. Piliated woodpeckers are among them. The population has grown steadily since 2003. During the 2016 bird count, 48 pileated woodpeckers were sighted, a new high for the Pittsburgh area.

Although sightings tend to rise and fall from year to year – sometimes dramatically – a deeper look at the data suggests the piliated woodpecker continues to recover from historic lows. In 1933, a study reported the species to be near extinction.

Great blue herons have been counted in higher numbers in recent years, as have other species, including mergansers. 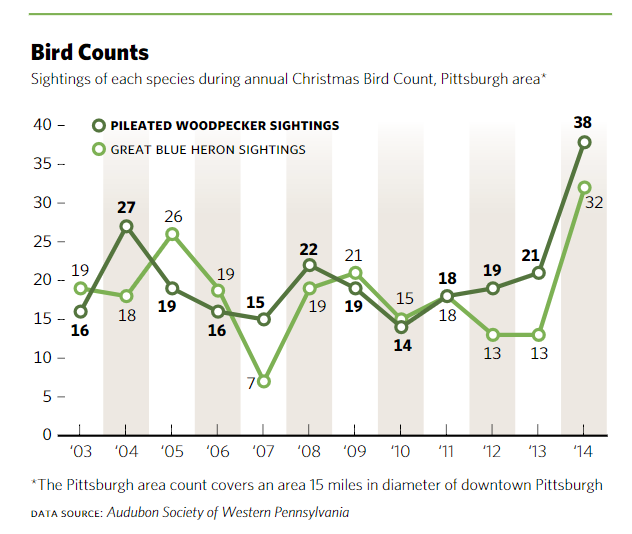 Mussel populations are one indicator of the health of aquatic life. The Pennsylvania Natural Heritage Program, a partnership between state agencies and the Western Pennsylvania Conservancy, reports population data. The data have their limitations. The number of surveys done on each river, for example, varies widely and survey methods have changed over the years.

Despite the limitations, available data suggest improvement in some aspects of the mussel population. Surveyors have identified the state endangered pistol grip and pimpleback mussels in the Ohio River for the first time since the early 1900s. Divers also found higher numbers of other rare species, including the threehorn wartyback mussel.