Could the Coronavirus Kill the Gasoline Tax?

by Jeffery Fraser
Photo by Jay Skyler via Unsplash

A crisis in how to pay for roads and bridges with a gasoline tax had been worsening for decades. With Americans traveling less, the coronavirus pandemic is accelerating it.

Fifty years ago, when the miles Americans traveled in their cars were soaring, a tax on every gallon of gasoline sold worked as a way pay for the highways and bridges they used. But that hasn’t been the case for nearly two decades, as more fuel-efficient vehicles populate the roads and Americans travel fewer miles.

The federal Highway Trust Fund, fed by an 18.3-cent-per-gallon tax on gasoline and 24.3-cent tax of diesel, has fallen short of covering the construction and upkeep costs of transportation infrastructure across the nation for more than a decade.

Business closures and other social distancing rules and other steps taken to slow the coronavirus in Pennsylvania have battered state transportation funding that relies on the state’s own 58.7-cents-per-mile gasoline tax, which is the second-highest among all 50 states. PennDOT officials warned in May that the state budget for transportation construction, maintenance and other projects will fall at least $1 billion short due to decreased travel during the pandemic. 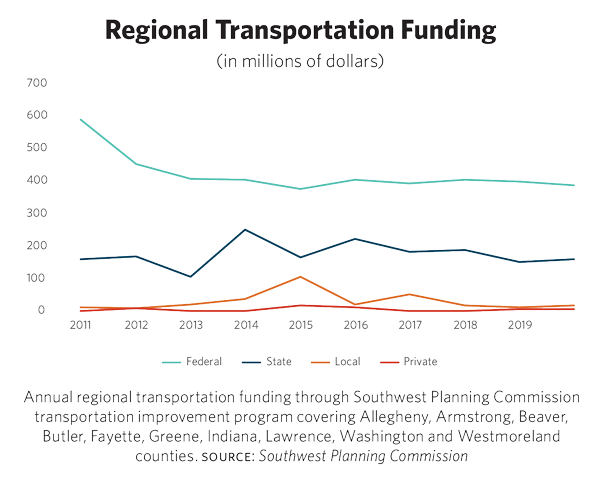 The federal gasoline tax was conceived in 1956 and has been raised only four times since, with the last hike enacted in 1993. It hasn’t generated enough money to cover surface transportation costs in states across the nation since 2008, requiring Congress to prop it up with billions of dollars from the U.S. Treasury general fund.

Future prospects are grim. The Congressional Budget Office projects the Highway Trust Fund will fall more than $90 billion short of covering transportation costs in Pennsylvania and other states over the next six years.

And that pre-coronavirus estimate does not consider the revenue loss from the sharp drop in America’s fuel consumption during the pandemic.

“The Highway Trust Fund has been broken for years,” said Andy Waple, transportation planning director for the Southwest Pennsylvania Commission. “I don’t think the gas tax is sustainable anymore.”

Federal funds last year covered 70 percent of the $573 million spent through the Southwest Pennsylvania Commission’s improvement program for roads, bridges, public transit and other transportation infrastructure in the 10-county region.

Congress will face the transportation funding crisis in September, when the Fixing America’s Surface Transportation Act that defines how the money is raised expires. Options range from replacing the federal tax on gasoline with a tax based on the miles each American drives to continuing to subsidize transportation budgets with more money from the nation’s general fund, which itself faces a staggering deficit.

In the meantime, southwestern Pennsylvania is watching as infrastructure funding for the region shrinks.

Over the past 10 years, the region saw its share of federal transportation dollars drop 35 percent, while its share of state funds has stayed roughly the same. And before COVID-19 reached the region, the Southwest Planning Commission already had projected that the funding needed for transportation improvements in the region over the next 25 years will fall $17 billion short.

With pandemic-related losses in state revenues looming, planners expect a period of belt tightening. The question is, for how long? “Projects that are on the program now are going to take longer,” Waple said. “They’re going to be pushed out by years. Some may fall off altogether. Where PennDOT was planning to replace bridges, you’re going to see more rehabilitation and postponement of costly replacement. With roadway reconstruction, you’re going to see more patching and filling and seal-coating.”