Pittsburgh and surrounding neighborhoods received a respite from air pollution in the weeks after nonessential businesses were closed and residents were urged to stay at home and off the streets to help slow the spread of COVID-19.

The air is often the cleanest during March and April, when the region experiences few pollution-trapping temperature inversions. “But combined with fewer automobiles on the roads due to the stay-at-home order, we are seeing historic low levels of pollution,” said Jim Kelly, the Health Department’s deputy director for environmental health.

The average level of nitrogen oxides in Pittsburgh’s Lawrenceville neighborhood, for example, was only about half of what it was during the same period last year. Nitrogen oxides react with volatile organic compounds and sunlight to make ground-level ozone, a harmful gas and widespread air pollutant.

Carbon monoxide, another traffic-related pollutant, fell by 29 percent along the Parkway East.

And in tiny Liberty Borough on the Monongahela River, where air quality is among the poorest in the county, fine particulate pollution was down 47 percent.

The Liberty monitor is downwind of the U.S. Steel Clairton coke works, which like many large fossil fuel burning industrial plants, are prolific emitters of pollutants that form fine particulates known as PM2.5. The coke works is among several local plants that have reduced operations during the pandemic. 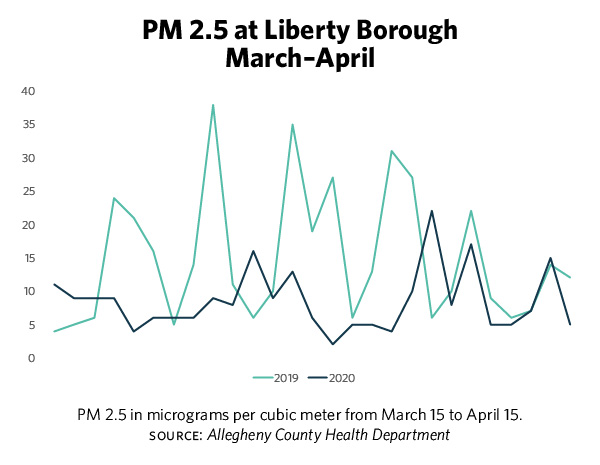 Studies suggest that big reductions in automobile traffic, even if temporary, can lead to better health outcomes, particularly for people with respiratory illnesses.

In Atlanta, emergency room visits for asthma plummeted during the 1996 Olympics, when much of the city was closed to traffic. Fewer cars meant less ozone and fine particulate pollution, which the U.S. Centers for Disease Control said was the reason asthma outcomes improved. And children benefitted the most, with childhood asthma visits dropping by 42 percent.

Smog was in retreat

Southwestern Pennsylvania was coming off a year of low ground-level ozone pollution when the virus led to a statewide shutdown. The pollutant sunk below federal limits to 0.064 parts per million in 2019. Ozone pollution is worse during long, hot summers, while lower levels are usually experienced in cooler weather.

In Allegheny County, fine particulates measured in Liberty Borough are the culprit. Although levels there have fallen steeply over the past 20 years, emissions from the coke plant have routinely kept them above federal limits. The plant, one of the most regulated in Pennsylvania, is also a major source of sulfur dioxide, which exceeded EPA limits last year.

The county Health Department in March said it would continue to enforce pollution rules during the pandemic, despite a change in EPA policy that gives them the option of loosening the reins.