Bob and Fritz Together

Fritz is wearing a contraption. Two black, rubber wheels attached to a harness that allows him to bark and roll and bark and roll his way across the grass. He’s been wearing it for four years. Ever since he jumped and missed and fell off one of the concrete steps in the back yard. 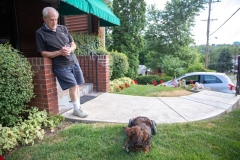 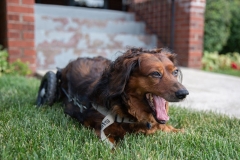 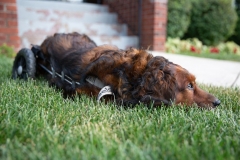 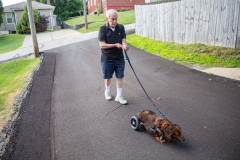 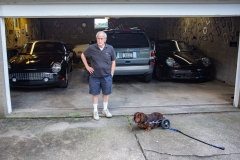 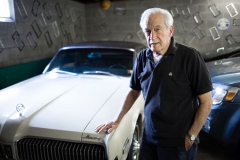 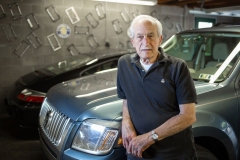 “I can still remember his face as they carried him away,” Bob says. “He turned back and looked at me like, ‘Don’t leave me here.’ That was tough.”

The discs got fused but a nerve got cut and Fritz was left a paraplegic. So, they took some measurements, sent them off to Eddie’s Wheels for Pets in Massachusetts, who makes wheelchairs for dogs, and Eddie shipped one back for Fritz, a long-haired dachshund who just turned eleven. Today, actually.

“You had steak for dinner, didn’t ya?” Bob asks him.

When Bob first picked up his new puppy from the breeder, he stopped at his sister’s house to show him off.

“What are you going to name him?” she asked.

“Fritz,” he told her. “Fritz because, well, it was just the name that came to me.”

Fritz has a brother named Benedict. As in Pope XVI. He lives over in New Stanton. Occasionally, he and Fritz still get together. They were supposed to get together today to celebrate their birthdays, but something came up and Bob had to postpone it until next week.

Bob’s got his wheels, too. The ’68 Cougar, the Porsche, the Continental, the Thunderbird…

His dream was to retire from US Steel, buy a new car every year, and travel. He did retire; twenty years ago after working in personnel, pensions, and 401(k)s for thirty five. And not having to go into the office every morning was great for like, ten minutes. “I had to have something to do,” he says. So, right after he retired from US Steel he got a job at Benson Lincoln, working three days a week. “Benson’s a smaller dealer. So, when a customer comes in and wants a blue car, and we don’t have one, we go and get them one. Otherwise, they’ll go somewhere else,” he says. He’s been all over the place. West Virginia, Virginia, Ohio, New Jersey, Michigan, South Carolina, Indiana…

“Thirty-four thousand miles a year,” he says. “I keep track.”

He keeps a license plate holder from every dealer he’s visited nailed to walls of his detached garage, which sits behind his house in Lincoln Place. The one he grew up in. His parents built it in 1932. One of those Sears & Roebuck houses. The “Lakecrest,” model; one thousand, five hundred bucks for five rooms and one bathroom. Built in Iowa and shipped to Hays on a train for his parents and their contractor to pick up at the station and put together on a corner lot.

Eventually, a small addition to the house was made and Bob moved his aunt in so he could care for her. “She raised me and my sister,” he says. “I had to take care of her. She was like my mom.” His aunt died when she was 97. Alzheimer’s.

So, these days, it’s just Bob and Fritz and all their wheels. And someday, maybe, Bob will think about retiring for good.

“When I can’t move anymore,” he says.