↓ Skip to Main Content
Search
Home › Article › Trading Licks with Dave: The Wisdom from a Lifetime of Music

Trading Licks with Dave: The Wisdom from a Lifetime of Music

“You want a speedball?” Dave asks. “No, not that,” he adds, laughing at the blank stares. “Not coke and Quaaludes like they used to offer us in L.A. Espresso and wine. One of my clients got me this espresso machine. Fun. Oh man, have you heard of this? Beaver Valley Blend. Amazing. Really, really smooth.” 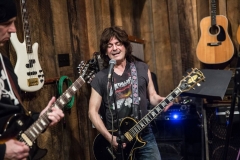 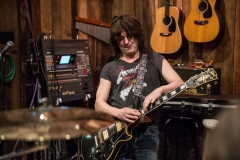 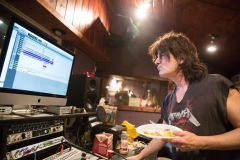 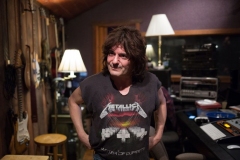 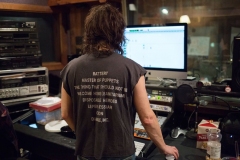 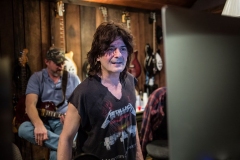 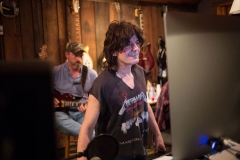 The espresso machine is holding court on a small table pushed up against a wall flanked with guitars in Dave Granati’s recording studio in Ambridge. The ’73 Stratocaster. The Rickenbackers. He’s got the Les Paul in his hands. The one he bought when he was 17. Five hundred bucks. With the case.

He never sells his guitars. People always do that; sell their old guitar to buy a new one. They look at the Les Paul, shake their heads. You still play that guitar, dude?

The Les Paul pickup, which is kinda like a microphone in the sense that it turns a sound into an electric signal that can be amplified or recorded, was a gift from back in the day when Frank Barsalona was the booking agent for like, everyone. The Granati Brothers got him to come to Morry’s Speakeasy in Rochester to hear them play. Signed them that night, then hooked them up with bands like J. Giles, Molly Hatchet, and this new one, Van Halen, that no one had ever heard of.

“After they got big and we were opening for them, I told Eddie I was thinking about getting a pickup on my Les Paul,” Dave says, cradling the Les Paul. “When we finished our show, his roadie came over and said, ‘Hey! Eddie wants to see you,’ and so I went over to see Eddie and he said, ‘Dude! I’ve got plenty of these. Here! Take it, man!’ Like, Les Paul’s have a tendency to howl. Real weird, kinda. Eddie, somehow he figured out if you soak a pickup in wax, it won’t feed back the wrong way. What the hell made him think of that?”

Dave played his first gig when he was 12 years old in front of 600 kids. His neighbor, Donnie Iris, lent the Granati Brothers some mics. When Dave got on stage, his hair stood up on the back of his neck and his arms. That was the end of his stage fright. His brother Joey still gets nervous, though. “I always know when we’ve got like, ten minutes to showtime because Joey keeps going to the bathroom,” he laughs.

Dave still plays gigs. Teaches, too. A handful of adults show up every Monday to his Long Live Rock Academy for lessons. Nick, Wade, Ed, Cathy, Smilin’ Harry… Most brought their kids here to take lessons. Parents with legit day jobs who said, Man, we wish there was a class like this when we were kids.

So, Dave started one for adults. They play benefits. Practice every Monday night at 6:30 p.m. Jam. Record. Take a shot of Gentlemen Jack. Have a beer. Salute! Absolutely no drugs, though.

“Okay, what do we want to do? Something nice and pretty like Conway Twitty,” Dave calls out after offering everyone some cotton balls to absorb what’s about to pour out of the Peavey amps. “Okay, guys, we need to talk. What you never want to hear. It means we’re going to bed but we’re going to sleep,” he jokes as the errant notes intensify during warm up. “Okay! One… two… three… four.”

“How long… has this been goin’ on?” Cathy begins to sing.

“How long… has this been goin’ on?” Cathy repeats.

“Okay, this is a good segue for ya. We’re gonna go from Ace to Santana,” Dave calls out as the notes melt into the wistful bars of Santana’s “Europa.” Which, after a few bars, segues to Led Zeppelin’s “Ramble On,” then The Who.

Long Live Rock! Be it dead or alive!

“We end every song with “Stairway to Heaven.” Sometimes Stairway to “Free Bird.” What did the drummer get on his IQ test?” he jokes as the music dissolves. “Drool.”

“What do you call a bass player without a drummer? One big beat off. Okay, Dave, stick to the music!” he laughs, calling himself out. Setting down the Les Paul, he stands in front of Teletronix and begins mixing tracks on Pro Tools while eating homemade salad from a Styrofoam plate. “The salad was made by a vertically challenged guy!” he laughs again as Nick, Wade, Ed, and Smilin’ Harry come into the room. Cathy goes in the recording booth and begins to sing.

The question of whether he’s happy here in his Ambridge studio, happier than he’d be if he were sunning himself poolside in L.A., selling out stadiums, draws a blank, curious stare.

“Did you ever see ‘Fast Times at Ridgemont High?’” he finally asks, face lighting up. “Remember Damone? ‘Wherever you are, that’s the place to be.’”