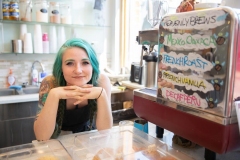 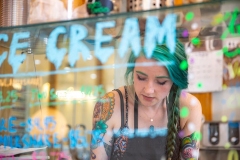 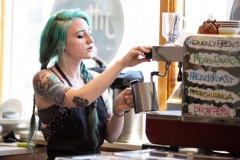 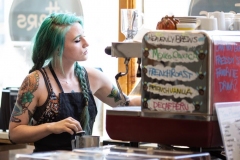 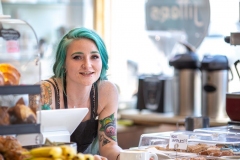 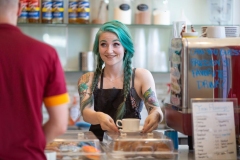 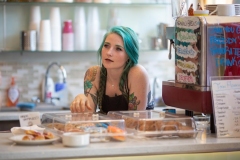 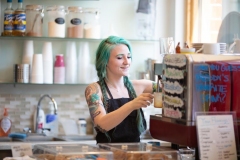 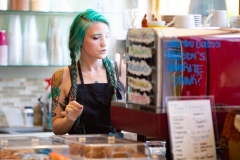 Deas Vail, Mew, Jon Bellion, Issues…artists with melodic vocals that she can harmonize with while she’s working behind the counter, pouring things like Lavender White Mochas and Gingerbread Chai Lattes into paper to-go cups and giant, white mugs as people throw a buck or two into a tip jar that pays homage to “Little Shop of Horrors.” “Feed Me, Seymour!” it reads. “Feed me!”

Not a single person complains. Not like some of the customers at the grocery store she used to work at in Bethel Park. Where she’d clock in, do her work, and just… sing. Totally absentmindedly, just sing a line or two or five.

She sang when she rang people up.

She sang when she stocked the shelves.

The singing started, well, a long time ago. Like, 24 years ago. Liz’s mom was a singer. Used to sing to Liz when she was a kid. Which was about when Liz started singing, too. When Liz was adopted, her foster parents said, “Okay, we’re doing something with this,” and signed her up for vocal lessons at Empire Music in Mt. Lebanon. Sixty to eighty minutes, once a week, with Candy, her instructor.

She sang her way into CAPA High School, where she learned how to control her breathing and the muscles in her throat and then how to go pretty low and pretty high and because she could hit a pretty advanced range for being fourteen years old, decided opera singing would be cool.

“I wanted to be a tattoo artist by day and an opera singer by night,” she laughs. “Opera because it’s got the least amount of acting, which I cannot do.”

She sang her way through some college auditions, too, but then one day she realized how bored she was. “It wasn’t a challenge anymore,” she says. “It wasn’t helping me grow as a person.” So, she switched gears. Got interested in psychology. Art Therapy. Currently just one semester away from getting her degree.

When she came to Jitters and began singing, at first, people pretended like they didn’t hear it. Then, they let her know they did. “Hey, can I be your agent?” they’d joke.

Now, they just know that Liz will spend most of her shift singing. Not every five minutes. Not for an hour straight. Just, whenever. A line or two or five. Totally absentmindedly. Just because.

“I really don’t have a filter,” she says. “But I know that people come in because I sing and that makes me feel really nice.”