The Mail’s Man in Munhall

It’s three o’clock on a Friday afternoon, and there are people coming into the post office on Main Street with letters to mail and packages to ship and books of stamps to buy and not one of them can resist the candy. Cinnamon drops and peppermints and, “Oh, is that butterscotch? I’ll take two,” sitting in a shiny, silver dish on the counter next to the sign advertising stamps. “The Inverted Jenny flies again!” 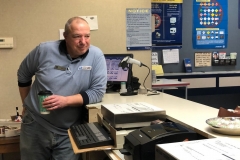 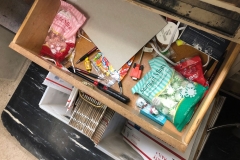 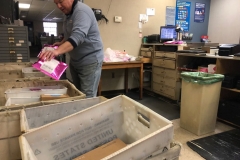 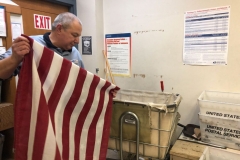 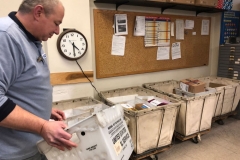 This is Ron’s post office, the Munhall branch in Homestead. Blondie is playing low from the old Panasonic AM/FM radio that sits on top of a gray filing cabinet next to four large, canvas mail bins on wheels. There’s a candle flickering on the same counter as the candy dish and there are St. Patrick’s Day decorations in the front window.

The candy is his. Well, it’s everyone’s candy. But he’s the one who buys it to give people a reason to smile for a few minutes after spending a lot of time rubbing their head over the whole change of address thing, because the mail that was going to their new address now needs to go back to their old address and is this really the form that will do that?

Before he started working for the post office, he spent eight years flying all over the world to places like Korea and Germany, and then seven months in Desert Storm while serving in the U.S. Army as a mechanic. “I had no idea what I wanted to do after high school and I knew nothing about cars. But I figured that if I learned how to fix things, I could help my family and friends out if they had a problem.”

He tried his hand selling insurance after he was discharged. But that gig didn’t do much for him and he went down to the post office and filled out an application. “Here I am, 25 years later,” he says. He loves it. Interacting with people and BSing and staying busy and helping people when the small Priority Mail box they’re trying to fold together is beginning to feel like a Rubik’s Cube. “You just want to treat people how you’d like to be treated if you were on the other side of the counter,” he says.

Ron has worked at the McKeesport post office and the Homestead post office and for the past year and a half, here in Munhall. He doesn’t even have to look at the door when it swings open. All he has to hear is “Hey, Ron!” and he recognizes the voices; knows when it’s Michael or Fred or whoever.

Jimmy used to be a stuntman in Hollywood. As he’s talking about the good old days, three more customers come. Ron rings up his money order. And as he places it into a clear, plastic envelope for safe transport, Jimmy has moved a few feet down the counter and on to Charlton Heston and the Oscars and Gunsmoke and Yakima Canutt and John Wayne and Jeopardy and Ken Jennings and then back to Gunsmoke again and, oh, did he ever tell you about the time he got his eye cut open while he was boxing? Ron is being very polite and listening as best he can while waiting on the other three customers. He continues to be very polite after they leave and it’s just him and Jimmy again, who’s back to John Wayne. Ron takes a sip of coffee and smiles politely. That’s when Yakima Canutt comes up for the third time, so Ron starts moving some boxes and hot pink metallic bubble mailers into the canvas bins. If he’s trying to get Jimmy to take the hint, it’s not working. So, he very politely says how great it was to see him again followed by a very nice, “I have to get back to work, Jimmy.”

And it’s fine. Jimmy does that all … the … time. Some people just like to talk to Ron, even if they don’t have a letter to mail or a package to ship that doesn’t contain anything liquid/fragile/perishable or potentially hazardous, including lithium batteries or perfume. They come in, say hello, grab a piece of candy.

“You didn’t want to say hi!” Ron will say. “You just wanted the candy!”

They come in and want to know who did such a nice job of decorating the post office for Christmas or Easter, or just because it’s summertime. “Well, that would be me,” he’ll say. “Sometimes I get embarrassed to even tell them that I’m the one that does it!”

The post office closes at 4:30 p.m. Thirteen more minutes to go. Ron and his wife, Irma, will probably go to the casino this weekend. Maybe the Meadows or Rivers. They used to go with his sister, Pat, brother-in-law, Russ, and nephew, Matthew, to Atlantic City. The six-hour drive was the best part. Oh man, just laughing and having so much fun in the car. The five of them once drove all the way out to Vegas. Took a week to do it. Saw the Grand Canyon and The Four Corners and positioned Matthew’s wheelchair so that each wheel was in a different state. Matthew died recently. So, it’s been a tough couple of weeks. Just … yeah.

“What do you have for me today?” he asks a gray-haired lady as she places a Priority box on the counter. It’s covered in thick strips of masking tape and destined for an old friend in Bethel Park and is going to cost her $13.95 to ship, which is more than she paid for what’s in the box.

“Here,” he replies, pulling out a regular brown cardboard box. He taps the touch screen, punches in the zip code. “That’ll save you a coupla bucks.”

“Now, I have the money to buy stamps,” she says, her face lighting up. “You’re so cheerful after a full day’s work. That’s so commendable!”

“Well,” he smiles, handing her a receipt. “Without you, they wouldn’t need me.”