Grandma is being really nice about the birthday cake you insisted on baking from scratch for her 96th birthday. Because it’s a little … dense for something that was supposed to very light and airy and angel food cakey. 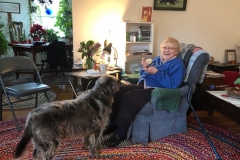 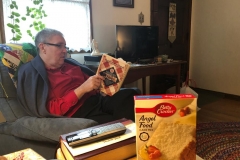 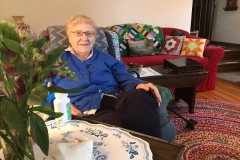 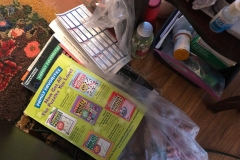 “This is why normal people just buy the Betty Crocker and be done with it,” howls Uncle Sam.

“Maybe it was the amount of sugar you used,” she says. “How much sugar did you put into it? One cup? That’s a lot of sugar. Well, it’s the thought that counts. Sam didn’t get me anything.”

“I give you five star care!” Uncle Sam says. “That’s a present you get all the time.”

Uncle Sam is Grandma’s son. He’s a registered nurse. Spent 30 years running a clinic as a missionary in Haiti. Now he runs around taking care of Grandma full time, getting her medicines, cooking all her meals, cleaning, getting needled and needling right back, and stashing candy all over the house they share, including M&M’s in an empty prescription bottle for Diltiazem.

Elizabeth Marie Rice was born a Sokloski on February 4, 1923 in Ellwood City, right there in her parents’ house on Franklin Avenue. Eleven pounds. The second of four kids. Everyone called her Betty.

Grandma was a tomboy. She could play better than the boys. Run faster than the boys. “I could beat up on them, too,” she says. She spent most of her childhood up in a Quaking Aspen tree, sitting on a board she put across two branches where she’d read and try to write poetry. When stamps were three cents, and Bonnie and Clyde were on the loose, and the Lindbergh baby’s photo was plastered across the front page of every newspaper, and movies were silent. “The first movie that was a talkie was so boring to me,” she says. The reason? No organ player.

When she was older and the boys took her out on dates, she’d burn them with her cigarette when they got too fresh. “Well, good night,” she’d say. “Yeah, that’s all you ever do is say ‘good night,’” they’d grumble.

“Tell her about that fly boy that gave you a mickey when you were in the army!” says Uncle Sam.

“No! I didn’t get a mickey! We were stationed in Shanghai and he asked me and a girlfriend over to his house for dinner. Afterwards, she went off with his friend and the guy I was with had a police dog who he had bite down on my wrist until I threatened to report him to his commanding officer. He scared the pants off of me.”

“That was the point, dear!” Uncle Sam says. “To get the pants off of you!”

Grandma enlisted in the Army in 1945, two years after she graduated from nursing school. When the other Uncle Sam said, “I WANT YOU!” she said, “Ok!” The Army put her on a train headed for Camp Swift in Austin, Texas for basic training, with orders to go to Germany. But then the Nazi’s said, “We surrender.”

The Army put her on a boat headed for Japan. A 35-day trip on the USS General E.T. Collins that skirted around the tip of Australia to avoid the Japanese submarines swimming around Calcutta. After two weeks in Japan, she flew the “hump” – that’s what she said they called flying over the Himalayas – for the interior of China, where she was supposed to work at a field hospital. But by the time they got there, all the wounded soldiers had been shipped back home. So, they flew her to Shanghai, to the 172nd General Hospital, where she spent a year treating malaria cases and listening to doctors order the soldiers to get to the “pro stations,” like, now. Syphilis was a concern. “Pro was for prophylactic, I guess,” she says.

And she liked China. It was fun.

Grandma’s eyes aren’t so good these days. But her mind is. It’s as sharp as a tack. It was sharp as a tack when she found herself a 40-year-old divorcee in 1973, when she signed a mortgage on her own house in the North Hills, turned 50 years old and put her nursing uniform back on, and when she joined her church on a missions trip to Haiti in 1979, where she stayed for four years until she broke her wrist climbing a mountain and had to come home.

“I was running across some rocks!” she says.

“Everyone in this family thinks you were climbing a mountain,” says Uncle Sam.

While her wrist healed, her mind was sharp enough to whip you at Scrabble every time you came over to visit, solve every crossword puzzle that ever dared make her acquaintance and to go back to work as a nurse, eventually retiring at the age of 81.

“How does it feel to be 96?” she says. “One year older than 95. But God has been good to me. I’ve lived an adventurous life. And you know, it’s beautiful weather outside today. Just for me.”