↓ Skip to Main Content
Search
Home › Article › The 57th Carnegie International: Looking Forward While Mindful of the Past

by Vicky A Clark
2019 Winter
Photo by Bryan Conley, courtesy of the artist and Jack Shainman Gallery 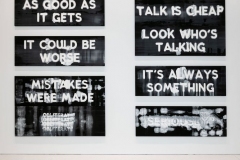 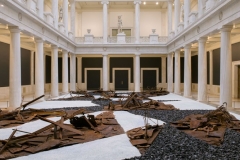 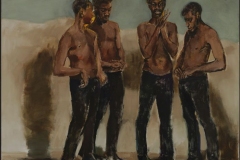 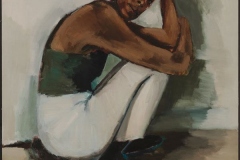 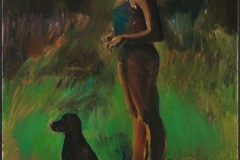 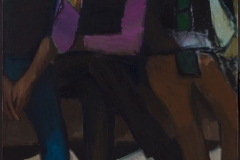 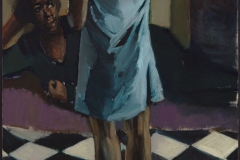 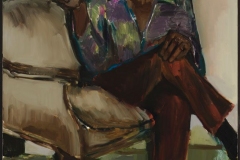 The previous International had outposts around the city. This one remains within the museum and Curator Ingrid Schaffner seems to have shared her interest in the history of the institution, the exhibition and the city with the artists.

A perfect example of how the museum’s history uncovered by research became the foundation of a piece is “Fruit and Other Things” by Lenka Clayton and Jon Rubin. They scoured Carnegie records between 1896 and 1931 that listed both the accepted and rejected works. In alphabetical order, the titles of 10,632 rejected works are being hand painted in the gallery and displayed. As each new one is finished, one is placed in a bin for visitors to take home. Their endeavor reminds us of Christian Boltanski’s “Archive” from the 1991 show, which was a three-dimensional “list” of all the artists who had shown at the International until then with dates of their appearances, typos and mistakes included.

Boltanski and Clayton/Rubin deal with the mash-up of fact and fiction, leaving the meaning up to the viewer, who tries to imagine what work was titled “Arabs Weighing Potatoes.” This collaborative piece addresses not only the exhibition’s history, but the labor of art, an interest in systems, and the (mis)construction of history with an added bit of the absurd. Placed in the gallery in the art museum lobby, adjacent to work by Kerry James Marshall and Thad Mosley, it sets the tone for the show.

That approach continues in what is considered the first gallery, where Ulrike Müller requested the wall color, a window in a freestanding wall and the opening of the skylights, in the form of a discussion about abstract painting by Susan Crowner and Müller. Crowner’s color study on floor tiles also relates to the Sol LeWitt wall drawing from the 1988 show that graces the Scaife staircase leading to the gallery.

Conceptual and formal correlations provide a quiet and studious start to the show, in the very gallery that has in the past housed monumental works, such as Robert Thierrien’s oversized table and chairs (1995), Kutlag Ataman’s multiple monitor installation “Kuba” (2004), Mike Kelley’s systems-based presentations of crocheted tchotchkes (1991) and Mark Bradford’s big collaged, map-like paintings (2008). All dominated the space and provided a big start to the show. Now, the memory of past works in the gallery creates a different sort of localized knowledge, a different kind of site specificity.

The densest and most rewarding piece in the show is “Dig Where You Stand,” described as a “visual essay bristling with objects” that combines the local and the global, arguing that in order to understand your current situation, you must start with your own place and past. Led by Koyo Kouoh, an institution builder and exhibition maker, with the assistance of a group of University of Pittsburgh students, this curatorial exercise continues the investigation of the Pittsburgh museums themselves that was an important part of the 1991 International.

Residing in Africa, Kouoh has a particularly informed view of what she calls “coloniality,” a word coined to pinpoint the state rather than the process or history of being ruled by another country. The exhibition consists of three subcategories (coloniality and agency, speculative temporalities, and mobility and exchange) with “research clusters”: animality, elite/non-elite, imaging labor, industrial domestic, industrial refuse/reuse, and beyond natural worlds. This academic breakdown results in a quite enjoyable viewing, a trip through ideas and beliefs associated with the institution as revealed by its collections.

Old friends, such as images of Pittsburgh by photojournalists W. Eugene Smith and Teenie Harris and the closed-circuit system of a copy of Rodin’s “Thinker” watching himself on a TV monitor by Nam June Paik, are paired with hidden treasures, including the bald eagle killed on the battlefield of Gettysburg, a map marking where diplodocus carnegii, or Dippy the dinosaur, was retrieved for founder Carnegie, and a drawing of a dinosaur by Paul Thek, whose retrospective exhibition was presented recently at the art museum. These objects tease out various meanings, adding complementary ideas to our concepts and understandings of colonialism seen in the context of site specificity, which in this case is Pittsburgh. While this is truly a highlight of the show, it raises the question of whether it is too Pittsburgh-centric.

This intelligent approach continues in smaller doses throughout the show, including Beverly Semmes’ “Feminist Responsibility Project (FRP),” a body of work she started in 2000. It is installed in a corridor, forcing a linear reading of the interrelated works, moving from the soft-porn photos that are almost obliterated with child-like, surrealist-inspired drawings, hand-formed clay objects that seem to walk out of the drawings, and the video of a fashion show featuring wearable art made from Semmes’ work. As a well-known feminist, Semmes layers references to the body politic, saying, “Think of me as a rogue censorship bureau.” The politics here are apparent, but they are couched in theory and humor.

Another equally provocative approach to the body can be seen in the more traditional paintings contributed by Lynette Yiadom-Boakye, who took home the Carnegie Prize. Drawing upon the history of portraiture and the act of painting, she creates fictional characters. Her black figures, actually created with layers of brown over blue and orange, are usually completed in a day. The immediacy and mostly empty backgrounds allow the viewer to provide the narrative, a decidedly contemporary trend that also characterizes her short stories. In both painting and writing, she mixes her reality with fantasy, operating in an in-between space that encourages further imaginative meanings. These paintings, a highlight of the show, are not only mesmerizing for the viewers, but they stay in their memories.

A quick shift comes with the salon-hung wall of Mel Bochner paintings that follow Yiadom-Boakye’s work. He wanted to create “a subconscious” for the show, so he presented banal phrases that mimic responses to contemporary art. Continuing his typical textual work, he stenciled phrases on monochromatic backgrounds, going against form by using thick, gooey paint rather than mastering the perfection achievable with this technique. From “blah blah blah” to “seriously?” the artist seems to poke fun at the pretentiousness of contemporary art while providing some comic relief. This conceptual strategy recalls works by several previous International artists, especially the irreverence of David Shrigley. These pieces also resonate with the Christopher Wool piece at the back door of the art museum, a stenciled piece that begins with “The Show is Over” from the 1991 show as well as the collaboration between Clayton and Rubin.

The placement of Bochner’s “I forget” over the hallway doors to the Hall of Sculpture adds another layer of meaning to an already loaded space. A scaled-down version of the Parthenon, this room introduces classical Greek culture into a New World museum, asserting a common heritage. For the 1988 International, Lothar Baumgarten added another layer by inscribing the Cherokee language, created by George Sequoyah in the 19th century, onto the glass ceiling, reasserting the presence of the Native American, which has, for the most part, been erased or forgotten. Again, an artist has added to or interpreted aspects of the Carnegie and its collections.

Inside the Hall of Sculpture is “From Smoke and Tangled Waters We Carried Fire Home” by Post Commodity, which references previous works and the history of Pittsburgh. Their stark arrangement of salvaged industrial materials—steel, coal and glass manufactured in Pittsburgh—echoes the work of Pedro Reyes from the last show, who contributed his music-making machines cobbled together from found objects. Like the music performed with those instruments, this inert composition comes alive with periodic rituals that resemble those enacted around Navajo sand paintings, the inspiration for the piece. Post Commodity, a collective of artists from indigenous nations, has found a connection between industrial Pittsburgh and the Navajos, but their vision of the city seems to be stuck in a past that has become so nostalgic, the dying dinosaurs of the steel industry. Like the sand paintings, the materials will be swept up at the end of the show and returned to the landscape, another disappearance of the past. But as one member of the group stated, when a door or portal closes, “some residue remains,” a thought appropriate to Lothar Baumgarten’s hope for the co-existence rather than the replacement of cultures.

The Hall of Sculpture with its plaster casts of ancient sculpture is such an interesting aspect of the Carnegie’s collecting philosophy, reflecting a time when copies of famous works sufficed for a cultural education. The Gilded Age ideas that influenced Andrew Carnegie can also be seen in the names inscribed at roof level on the outside of the institute. Those names have become more controversial as we have entered a more inclusive age.

Tavares Strachan updates the list with a patina of brightly colored neon, people who matter to him, including Tupac Shakur, the hip hop artist whose words represent another reality. Placing him in the company stresses the overlooked and marginalized who have contributed to our culture and history. The new names in “The Encyclopedia of the Invisible” relate to so many conversations of the last half-century and to questions of who is presented on the walls of art museums, which is also a subtext in the works of Yiadom-Boakye.

This site-specific work sits at the opposite end of the building from the magic carpet by El Anatsui made of his signature bottle caps, discarded printing plates from a local printer, and sheets of reflective aluminum. This long horizontal curtain takes on the formidable vertical thrust of Richard Serra’s “Carnegie,” made of the steel that made Pittsburgh famous that was commissioned for the 1985 International.

Another piece from a previous exhibition, Henry Moore’s powerful “Reclining Figure” from the 1958 show, also resides in the dark, formidable and not terribly welcoming plaza. El Anatsui responded to the space by opening it outwards with the reflective aluminum—another Pittsburgh material—bringing the neighborhood to the front door. The artist followed others who have taken on this space, including Phyllida Barlow with a playful, colorful piece (2013) that contrasted with the Serra, and Doug Aitken, who turned the plaza into a movie theater by projecting “Migration” on the façade after dark (2008). El Anatsui’s intervention continues his interest in materials with recycled items in an attempt to soften the space and speaks to the Serra, providing even more views of the Serra that benefits from viewing it from all sides and the interior.

The time and effort involved in understanding the creation and placement of the El Anatsui work includes signals that this show takes time to unfold and that each viewing will yield a deeper understanding. It is a quiet and reflective offering rather than the spectacle usually associated with such shows, and it connects current thinking about how we process information and construct meaning with a decidedly Pittsburgh base. Looking at the Carnegie and its practices is Schaffner’s way of bringing the show back to the museum both literally and figuratively, a process that, in many pieces, mines local history, perhaps with the hope of connecting the local with the global.