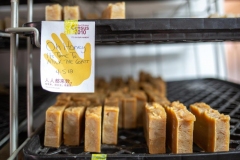 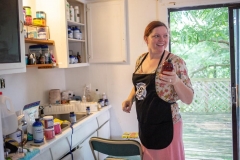 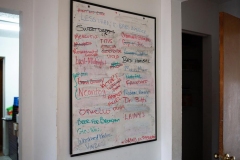 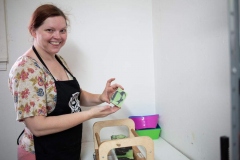 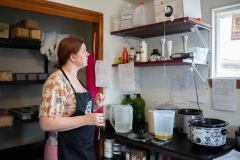 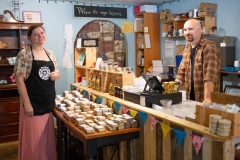 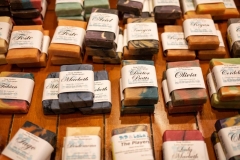 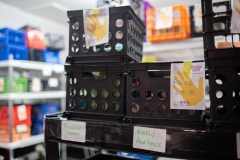 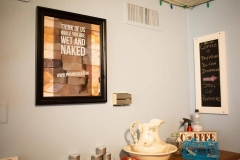 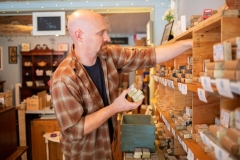 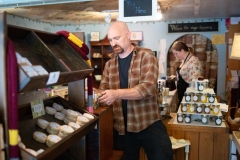 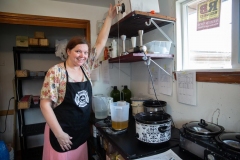 The storefront, Pip and Lola’s Everything Homemade—Think of us when you’re wet and naked—is in Munhall. And the recipes for the 125 different soaps they make are each printed out on white sheets of paper, tucked into plastic sheet covers, and placed into the binders.

“I have to make Amelia,” Samantha says. “Amelia has to happen.”

“This is our normal chaos,” Bruce says, “to figure out what’s going on.”

Right now, what’s going on is a decision about what to restock the wooden crate shelving with and what to feature in their Soap of the Month Club.

“Yeah. They’re both vegan and man friendly,” Bruce says. “Dude friendly… or for anyone who doesn’t like florals.”

People really like the soaps, all the colors. The pinks and the greens and the blues and the yellows and the browns that look that way thanks to things like the lemongrass and the tangerine and the sea salt and the chamomile and the honey.

They used to keep samples of their soap in a bowl at the counter. Unwrapped. Until people started popping them in their mouths, thinking it was fudge.
“It looked yummy,” they’d say.

The soaps are all handmade upstairs in crock pots, soup cauldrons, and roasting pans. Hand stamped with their logo, hand cut, and air dried for six to eight weeks on old bread racks that came from Craigslist. Then, they’re wrapped and labeled with names like De-stress Your Mess, Beer for Breakfast, Lovely Ladies, Oh Shea Can You See, Next to Normal, Oh Honey it’s Time to Milk the Goats, Tarred and Leathered, Janelle Says Bugger Off…

“It’s whatever name I come up with when I’m tired and loopy,” she says.

Fourteen years ago, just to be nice, Samantha randomly bought an e-book about soapmaking that a friend had written. One day, she actually started reading it. Did a batch or two in a steel pot to give away as cast presents after the curtain dropped on the play they were performing in. “Can you make that one again?” everyone would ask.

“My son was also allergic, topically, to everything under the sun,” she adds. “So, I said, ‘If we’re gonna make and sell soap, it has to be things he can use.’”

“Have I ever even made three hundred Rose Mary’s?” Samantha asks, flipping through the binder. “No, I have not. Oh $#@%!” she exclaims, pausing at one of the racks. “D.O.S.”

“The bane of my existence!” Samantha exclaims.

“We lost a thousand dollars in soap in one day because it went D.O.S.,” Samantha says, grabbing ingredients. “Do I have orange peel? Yes? No? Maybe so? Yes, I talk to my soaps,” she adds, reaching for a purple spatula and a plastic bucket.

If she couldn’t make soaps anymore, she’d miss it. The cooking. The chemistry. The crock pots, soup cauldrons, roasting pans, boxes of palm kernel oil, the lye water that stinks to high heaven…

“It keeps me sane,” she laughs. “The thing that I make changes people’s lives. It helps them. Even if it’s just ten minutes of lovely in their day, it helps. If I stopped acting, the world wouldn’t miss me. It wouldn’t be as nice, but it would go on. Not a whole lot of people get to have a positive effect on people and that’s worth getting out of bed in the morning. Now, if that could pay my mortgage, that’d be awesome!”