Staying Close to the Plow

Miller and a dozen Amish farmers will sell eggs, chickens and cheeses to Pittsburgh consumers through Isidore Foods.

Outside Neal’s Harness and Tack Shop in northern Lawrence County, cars and pickup trucks park alongside Amish horse-drawn buggies. A row of gasoline-powered washing machines, a sideline of Neal’s business, squat in a row beside the entrance. 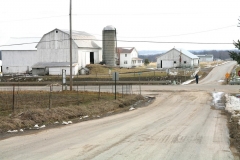 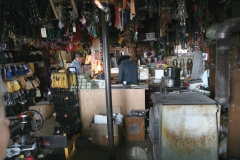 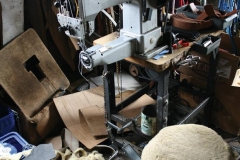 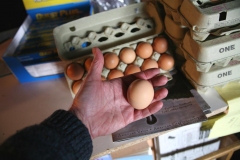 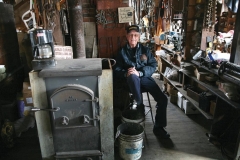 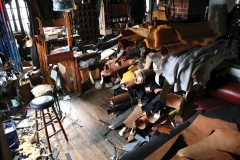 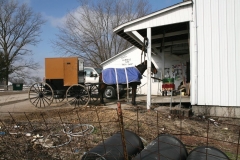 Inside, the smell of leather pervades. Harnesses, saddles, reins, tack and sleigh bells on straps hang from the rafters. Boots, belts, lamp oil and Amish hats line the shelves. Heavy-duty, pedaloperated sewing machines, their metal burnished with use, sit near the windows to take advantage of the light. There are no electric lights, of course. A kerosene lamp lends a soft glow to the cash register. Nearby is a display of brown eggs, with a sign, “Free Range Eggs, $1.75 a dozen.”

It’s a cold day and Neal Miller sits near the coal-burning stove that warmed a coffee pot. He could well be harried, running the harness shop in the Old Order Amish community and an adjoining farm, but he always has time for conversation—in person that is, not on the telephone. “My, how I do hate telephones,” he said. He prefers a face-to-face dialogue, with time for listening, reflection and response, in keeping with the Amish way. Miller has created a welcoming place, and there is a stream of customers and visitors, such as Sam Huff, an “English” (as the Amish call us) neighbor who likes to chat with Miller. “We’re good friends, Neal and I,” Huff said as he settled into a chair beside the stove, and the conversation turned to chickens.

“Those are good eggs, from my chickens,” Miller said. “Free-range chickens. These eggs are only the beginning of our plan to expand. If we are to survive, we must find a niche.” The niche he sees is producing healthy food that the public craves, and, within the last few months, there has been a real breakthrough, maybe divine intervention. A company named for the patron saint of farmers, Isidore, will help Miller reach a large market. Miller and a dozen Amish farmers will sell eggs, chickens and artisanal cheeses from grassfed cows to Pittsburgh consumers through Isidore Foods.

The new company is based on a concept known as Community-Supported Agriculture, or CSA. The region has several CSAs, in which subscribers pay farmers an agreed-upon amount, up front, and receive a box of food from May through November, delivered to a central point in the subscriber’s neighborhood. Sometimes, subscribers go to the farm to get their weekly allotment.

Isidore owner David Eson, working with a local food distributor, has contracted with more than 30 local farms producing vegetables, fruits, dairy products, meats, breads and pantry items. A truck will make weekly pickups of the Amish items, stored in a refrigerated warehouse in New Wilmington, and bring them to the Pittsburgh distribution point for subscribers. The farmers have a guaranteed market, and consumers get local produce at fair prices.

Miller’s participation is just one way that this Amish community of 500 families seeks to make a living and not get “too far from the plow,” so central to their way of life. Known for their plain lifestyle — no photos, buttons, electricity or telephones within their homes and no calling attention to oneself — the Amish have had an ongoing conversation about how to remain “strangers and pilgrims in this world” since they came here to practice religious freedom in the 1700s.

The conversation has taken new turns with the gradual drop in income from dairy farming and the shrinking of their land. “As each family shares their land with their sons, and, in turn, the sons share with their sons, you end up farming in a shoebox,” said Martin Stolpe, who has lived near the Amish for 40 years.

Ten years ago, there were 150 Amish dairy farms around New Wilmington, said Dr. David Swaney, a veterinarian who has long tended Amish farm animals. Now, there are 60. “Since they came here, they have been farmers and carpenters, but many of our Amish have moved to New York State or Ohio, where they can practice more progressive farming, using milking machines and bulk tanks to haul their milk,” he said. Milk produced by the Amish in this community is classified as Grade B by the state and cannot be used for drinking, because it is not put directly into the bulk tanks. “They send the milk in cans by truck to Middlefield, Ohio, to be made into cheese, and it’s very good cheese.” It is this cheese, in Middlefield, that will be distributed through Isidore Foods.

There could be a future in producing hay for the race track to be located in Lawrence County. The drought in the American Southeast has created a larger demand for hay. However, the slower Amish method of baling could be an impediment, according to Swaney. “They don’t take easily to change.”

But they are resourceful, he added. Amish farmers have created collaborative greenhouse gardens and truck farms to form a large produce market, geared to restaurants and grocery stores during harvest season, near the intersection of Route 18 and 208, west of New Wilmington.

As interface with the English increases, staying “close to the plow” becomes more challenging. Consider the implications of making a major decision, when you must take into account a set of unwritten rules for living, which the Amish call the “Ordnung.” Before you purchase an HD television set, a cell phone or a new car, imagine asking yourself and your family, “will this bring us together, or draw us apart?” or “does this elevate us above our neighbors?” Within these guidelines, the Amish make every decision.

When conversation about a considered change reaches the local bishop’s ears, it leads to decision-making by the congregation, but this may take a long time. “I’d like people to understand that the bishop doesn’t decide everything,” Miller said. “The issues are presented to the congregation by the bishop, and they’re voted on, but there are long discussions beforehand. It must be a unanimous vote, by a show of hands.” Reaching unanimous agreement takes time, but Miller favors it because it holds the center. “If it were only a majority, much more would be changed. Also, if it’s an issue the bishops don’t want, they simply don’t present it to the congregation.”

These are “house Amish,” so congregations meet, not in a church, but in each other’s homes. And, in keeping with their modesty, the congregation must be able to fit into the smallest home. There are 14 congregations in the community, each with about 75 adult members, plus children and young adults.

At times, compromise wheedles its way in; the Amish in this region can ride in a car, but cannot own or drive one. They can use gasoline- and diesel-powered generators, but not electricity. They can use a cell phone but not own one. They have natural gas wells on their property and receive monthly checks which supplement their incomes, but — and it’s a big but — by the unanimous decision process described above, they cannot use the natural gas to heat their homes.

They can and by law must use a 12-volt automobile battery to activate blinking red lights on their buggies at night, so that cars can see them. They can use a telephone, but not own one, and if they work where there is complex machinery, they are allowed to operate it. For example, some Amish men work in a lumber yard where they determine the cut of the lumber by computer.

By choice, they don’t participate in Social Security or Medicare and do not have medical insurance.

“The government seems to have a policy now to leave them alone,” said Federal Judge Francis Caiazza, who once defended Amishman Dan Lee in the Supreme Court for not paying into Social Security. Though he lost the case, not much happened.

The Amish take care of their medical expenses by holding a benefit auction and sale June 7 at the New Wilmington Auction Barn on Route 208, just west of New Wilmington. It’s a large gathering with Amish from other communities who are distinguished by slight variations in their clothing, perhaps purple aprons rather than blue, yet have the same healthy, sun-touched complexion.

The “English” are welcome to attend the auction, which runs all day. To go is to step into the world of the Amish. Beyond the mysterious-looking machinery, all run by generators and compressors rather than electric motors, there are quilts, produce, baked goods, pizza made on bricks atop a Coleman stove and a “one-lunged generator” ice cream maker, as Martin Stolpe describes it, burping out small explosive sounds as it turns out the creamiest ice cream ever tasted. A hand-printed sign alongside the machine says “Achtung.” Translated from the old German which Amish speak to one another, it reads “This machine emits sparks occasionally, so stay away and don’t do any rubber-necking.”

And that’s a good thing to remember on the road when you see their buggies!

Bette grew up in New Castle and is a firmly planted transplant in Deutschtown on Pittsburgh's North Side. She came to Pittsburgh to work at the Thomas Merton Center and met all the interesting people who came through the doors there. She met the rest of Pittsburgh as a freelance writer for the Pittsburgh Post-Gazette and some magazines. Next to Pittsburgh, she loves Iceland best, but there's not enough room to tell why.