Sarah’s Wisdom Behind the Counter

“Okay, what’s today’s joke?” The guy at the counter orders his Americano, sits down, lets the anticipation build for a few seconds. His eyes are dancing behind thick black glasses, grinning like he’s about to bubble over into a thousand little joy bubbles, because he’s got a joke. 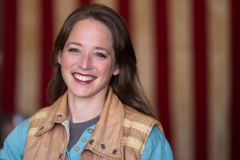 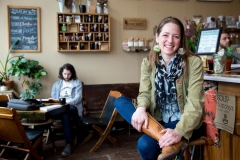 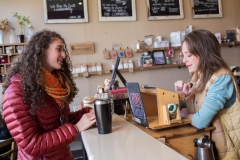 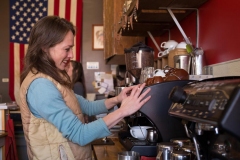 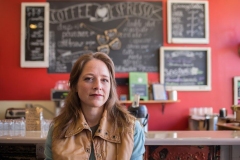 “Okay, ready? Why do restaurants on the moon always fail?”

No one knows. Not the barista behind the counter, not the girl slumped over her laptop. No one.

“Food’s good… no atmosphere. Did you hear the one about the new broom they invented?” He asks, rolling right into the next one, his smile spilling joy bubbles everywhere. “It’s sweeping the nation.”

Sarah Walsh is supposed to be off today. Instead, she’s sitting on a stool at her coffee bar in Lawrenceville, Caffe D’Amore, legs pulled tight to her chest, listening to today’s joke. She has things to do that she would rather not have to be doing. Like getting ready for her Mom’s memorial. Cancer. Like preparing to lose another relative, too. Probably within the next few weeks.

“The whole world is a little sad and exhausted right now,” she says. “We’re all carrying our own battles. I just do my job.”

Her job is hospitality. Deep hospitality. Her mother taught it to her. Her mother also taught her not to have an agenda for people. Because they’re not customers, not a walking dollar bill. They’re people.

The world is loud right now. Like, really loud. Everyone is shouting, angry, talking over one another. I WANT YOU TO HEAR ME!

And you never know who’s going to walk in the doors. What stuff they’re going to bring with them. What can you do about it?

“I can provide a calm environment. A safe, hospitable place,” she says.

Sarah’s been doing that a lot. Most of her adult life, actually. She did it while she was a campus minister at Juniata College.

“I wouldn’t prescribe to people what they needed. I’d say, ‘Come hang out in my apartment. The door’s open. We’ll have tea. Talk.’”

She pauses. “It’s funny. My first job out of college I was putting something warm in someone’s hands.”

Which she continues to do daily. Putting something warm in someone’s hands. Keeping the door open. Even when your mind and your heart are miles away.

“I got into this because I love coffee,” she said. “The cross that I carry is that I’m now a business owner.”

Which some of her friends don’t get. I mean, look at you! they say. You’re a business owner!

“Mmm hmm,” she says. “So romantic. I always want to ask them, ‘Have you ever had to fire someone? Clean up something that’s gross?’”

Being in the service industry means you are serving others. Even when you’re thinking, “I can’t even anymore. But I have two more hours until it’s time to close.” That feeling, kind of being empty but still giving, that’s the magical drunk space. “I’m always so thankful for that,” she says.

Like the other day. She was just crying off and on. Everything. Her mom. Her relative. Just everything.

“I’m sorry you’re sad,” a customer said. “That was my day yesterday. I hope yours gets better.”

Because that’s the thing. Her customers are people. And the barista’s behind the counter are people, too.

“Okay, I’ve got a good one,” the guy at the counter says, all bubbles. “The last one.” No one knows if he’s aware that Sarah’s world feels heavy and exhausted right now. Maybe he does. Maybe he doesn’t. But he has today’s joke. “Why does the Norwegian Navy put barcodes on the side of ships?”

“Why does the Norwegian Army… put barcodes on the side of ships,” the barista repeats. “Um…”

“So, when they come to port, they can Scandi-navi-in,” the guy laughs.

“This is when we figure out how to smile,” Caffe D’Amore owner Sarah Walsh says. “And that’s good.”