Neville Island: Calgon Carbon’s Neville Island plant is No. 4 on the list of top regional emitters of air toxics.

Although the region’s air has improved dramatically from the height of Pittsburgh’s industrial past, southwestern Pennsylvania remains home to factories and power plants that release millions of pounds of toxic chemicals into the air. The U.S. Environmental Protection Agency uses Toxic Release Inventory (TRI) data to track toxic chemicals released into the air, water and land from manufacturing plants, power plants and other facilities. This report focuses on air emissions.

The Toxic Release Inventory covers more than 650 chemicals ranging from benzene and formaldehyde to hydrochloric acid and polychlorinated biphenyls (PCBs)— all of which scientific evidence suggest may pose a threat to human health and the environment.

Health risks associated with these chemical releases tend to be the greatest in communities nearest the source. The degree of risk is affected by a complex set of factors, including the amount emitted, weight of the particles, height of the smokestack, wind speed, humidity, proximity to the emission source, concentration of the pollutant and the duration of exposure.

The following is a list of the 10 facilities within the Pittsburgh Metropolitan Statistical Area that released the greatest volume of toxic chemicals into the air in 2014 and 2015 as reported by the EPA Toxic Release Inventory. The rankings are based on 2015 data for total air toxics emissions.

The facilities range from power plants and steel mills to chemical manufacturers and a brick factory. Each is required to report the volume of chemicals it releases each year to the Toxic Release Inventory. Those volumes vary widely—from more than 1.1 million pounds to just over 61,000 pounds in 2015. The plants that emit them are found in five of the seven Pittsburgh MSA counties.

The EPA and Pennsylvania Department of Environmental Protection have taken enforcement actions against six of the 10 facilities during the last five years for violating toxic chemicals regulations, resulting in fines ranging from a few hundred to tens of thousands of dollars and orders to correct emission control problems. 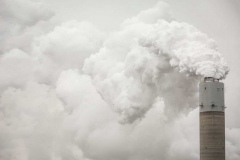 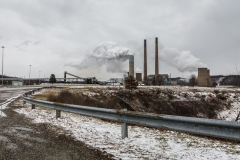 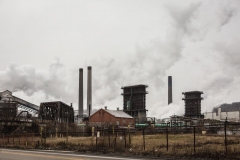 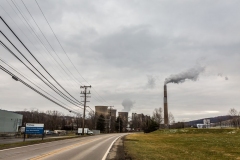 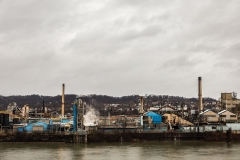 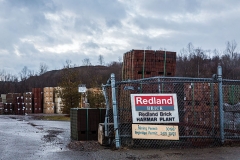 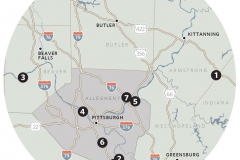 Sulfuric acid emissions continue to be a problem at the Armstrong County power plant, the only facility in the Pittsburgh MSA that emitted more than 1 million pounds of toxic chemicals in 2015 as reported in the TRI.

Chronic exposure to sulfuric acid can irritate and inflame people’s airways and aggravate asthma. Sulfuric acid participates in the formation of acidic particulate air pollution, which is a major cause of air pollution health effects.

Although it’s still the region’s largest emitter, the plant has dramatically cut the amount of EPA-designated air toxics since 2008, when it emitted almost 20.6 million pounds. Most of that reduction came through cutting its hydrochloric acid emissions from 16 million pounds then to 21,000 pounds in 2015.

U.S. Steel’s Clairton plant is the nation’s largest producer of metallurgical coke, the fuel used in steelmaking blast furnaces. In addition to air toxics emissions, the coke plant is a chief source of fine particulate pollution in Allegheny County.

During the past decade, the company invested in a new advanced coke battery, quench towers and other upgrades to help control air polluting emissions.

Despite improvement, the Clairton plant spent 11 of the last 12 quarters in violation of the Clean Air Act. State regulators levied nearly $1.6 million in fines for Clean Air Act violations during the last three years.

The plant also emitted 34,000 pounds of benzene in 2015, 45,000 pounds in 2014 and 54,000 pounds in 2013. “Benzene is terrible,” said Bernard Goldstein, M.D., former dean of the University of Pittsburgh Graduate School of Public Health and an environmental toxicologist. “It can cause leukemia and other blood cancers.”

Hydrochloric acid accounts for more than half of the toxic chemicals released at the Bruce Mansfield plant. Like sulfuric acid, it can participate in the formation of acidic air particles that are harmful to health. Inhaling hydrochloric acid can irritate a person’s nose, throat and larynx.

More than one out of every three dollars spent to build the $1.4-billion Mansfield facility was spent on environmental protection, and one out of every three employees operates pollution-control equipment, according to FirstEnergy spokeswoman Stephanie Walton. The plant was recently updated to meet the requirements of the EPA Mercury and Air Toxics Standards, which were finalized in 2011 and took effect in 2015.

“The EPA has been very aggressive. It’s a living, breathing process that is constantly evolving,” said David Flannery, an environmental lawyer with Steptoe & Johnson, who represents FirstEnergy. “Nobody gets the luxury of saying, ‘I’m in compliance. I don’t have to worry about it anymore.’ It’s an ongoing process of compliance.”

Calgon Carbon is the world’s largest manufacturer of granular activated carbon, which is used to purify air and water, clean up toxic spills and capture volatile organic compounds.

Its Neville Island plant releases the fourth-largest amount of toxic chemicals in the Pittsburgh MSA, according to EPA data. But its total air toxics emissions in 2015 were significantly lower than those reported at the Keystone Generating Station, the Bruce Mansfield Power Plant and the Clairton coke plant, which had the three largest air toxic releases in the region. In the Calgon Carbon facility’s operating permit, the Allegheny County Health Department describes the plant as a “minor source” of air pollutants, including volatile organic compounds and hazardous air pollutants.

Ammonia comprised nearly all of the emissions.

“Certain carbon products that are used in respirator and air filtering applications are impregnated with various materials to increase their effectiveness. Ammonia is used in two of these processes,” one of which is idled, said Calgon Carbon spokeswoman Amanda Mushrush. The idled process must, by permit, emit less than 122.44 tons of ammonia a year; the second process is limited to 9.36 tons a year, she said.

Ammonia can cause chronic lung conditions such as asthma and respiratory tract irritation. Health risks of prolonged exposure include pulmonary fibrosis, a scarring of the lungs that can lead to a host of respiratory problems, according to the Center for Disease Control.

“An ammonia scrubber is used and captures at least 95% of the airborne ammonia emissions,” Mushrush said. “Stack testing has demonstrated the scrubber to be effective and in compliance with our air permit requirements. Pollution control technologies are selected based on regulatory requirements, operational efficiency, economic and technical feasibility.”

The power plant began producing electricity in 1970. In 2015, air toxics emissions from the plant were heavy in sulfuric acid.

Like the other coal-fired plants on the list, air toxics emissions have fallen in recent years, EPA data suggest. The Cheswick Power Station emitted more than 3 million pounds of air toxics in 2007, which is nearly 25 times more than was released in 2015.

NRG has invested more than $400 million at Cheswick to install and operate advanced environmental control systems, spokesman David Gaier said. The company reported that since 2001, scrubbers and other systems cut sulfuric oxide emissions by 97 percent, particulate matter by 86 percent and mercury by 83 percent.

“Generally speaking, these emissions are simply a function of combusting coal,” Gaier said. “Obviously, even with the most modern environmental controls, plants will produce larger emissions as their generating units run more frequently.”

The Cheswick plant has had one Clean Air Act violation in the last three years. The source of the problem was identified as a scrubber malfunction, which caused the plant to exceed air standards for sulfur dioxide emissions, according to the EPA.

The second U.S. Steel facility on the list, and the sixth-largest emitter of air toxics overall, is the Irvin plant, part of U.S. Steel’s Mon Valley Works integrated steel-making operation. The plant is located in an area that is more densely populated than any of the other largest emitters of air toxics in the region.

Hydrochloric acid is largest toxic air emission at the Irvin plant. The plant also emitted 33,000 pounds of ethylene in 2015, an ozone precursor which itself can cause respiratory tract irritation.

Hydrochloric acid represented more than 98 percent of the brick plant’s air toxic emissions in 2015. The plant also released just over 1,000 pounds of sulfuric acid into the air that year, according to the EPA.

The state Department of Environmental Protection fined the Maryland-based company $525 in 2012 for violating air toxics regulations, the only formal enforcement action taken against the facility in the last five years.

Redland Brick did not respond to requests for comment.

Carbon disulfide accounted for almost all of the toxic releases reported at the plant in 2015. At high levels, chronic exposure to carbon disulfide decreases fertility in men and women, causing sperm abnormalities and spontaneous abortions, according to the EPA. It can also affect a person’s personality and has been associated with depression, anxiety, irritability, and hearing and memory loss.

The state Department of Environmental Protection fined the plant $5,000 for Clean Air Act violations in 2012. No fines have been levied since.

Eastman spokeswoman Amanda Allman said the company’s internal standards exceed those of the EPA, state Department of Environmental Protection and Allegheny Health Department. “We take our license to operate seriously. We focus on improving processes and protecting the environment in the communities where we operate, as well as understanding the environmental impact of our products. We set clear expectations and strive for a zero incident culture. We do this by ensuring our operations run responsibly. We not only work here, we live here,” Allman said.

The facility accounts for about half the worldwide production of resorcinol, a chemical used in pharmaceuticals and cosmetics.

Phenol made up about three-quarters of the plant’s toxic emissions. The plant is also among the region’s largest industrial emitters of benzene, a known carcinogen, releasing more than 5,500 pounds of the toxin into the atmosphere in 2015, according to EPA data. Indspec also emitted more than 1,200 pounds of formaldehyde.

The state cited the chemical company for violating air toxics regulations in every quarter from October 2015 through the end of 2016. In September of 2015, the company agreed to pay more than $153,000 in penalties and implement a three-year plan for additional emissions controls. The company denied liability in the settlement.

The plant manufactures adhesive resins used in tapes, labels, bookbinding and diapers, among other products.

Toluene is heavily represented in plant emissions. Depending on the degree of exposure, toluene can harm the central nervous system and worsen hearing damage, according to the U.S. Centers for Disease Control.

The Pennsylvania Department of Environmental Protection fined the plant $70,850 for Clean Air Act violations in 2012. The plant has not been fined for violating air regulations since.

Mike Wereschagin is a freelance writer and author living in the North Side whose past work includes investigations into the state of natural gas infrastructure, veterans health care and domestic radicalization.