by Stuart Sheppard
The Hamlet Machine
Photography by Laura Slovesko 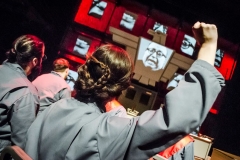 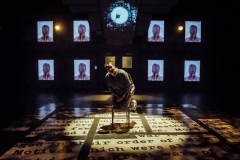 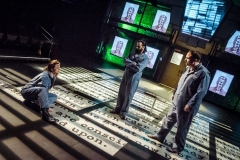 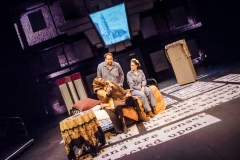 Orwell was a brilliant writer, and he believed that the act of writing is ultimately a means of moral expression. You see this from his earliest efforts as a book reviewer in the 1920s (when he still wrote under his real name, Eric Blair), through his many novels, to his essays—especially the seminal “Politics and the English Language” published in 1945. As he says in this piece, “But if thought corrupts language, language can also corrupt thought.”

The theatrical version of “1984”, recently adapted by Robert Owens, Wilton E. Hall, Jr., and William A. Miles, is designed to be played on a relatively bare stage, which emphasizes the language of the characters even more. Director Richard Keitel utilizes the large, open expanse of the New Hazlett Theatre right back to its naked brick wall, which is a refreshing inversion of the novel’s cramped, squalid atmosphere.

Justin Fortunato plays Winston Smith with a robustness that is also a departure from the book’s description of this man as a “smallish, frail figure.” Fortunato has a dynamic, commodious elocution which augments both the irony, and pathos, of the totalitarian version of English called “Newspeak” that has been instituted by the government. Especially in phrases extolling Big Brother—the ominous leader whose picture is always looming above the dystopian populace like a voyeuristic deity—and in the existential mantra Winston is forced to confront, that “two and two make five.”

He is a sad man living in a bleak world, until he connects with an attractive woman, Julia (Jessie Wray Goodman). They both work at the Ministry of Truth, where Winston’s job is to rewrite historical records so they are in line with the government’s constantly changing version of them (what today we might call “fake news”). Their courtship, hasty and compressed, is one of the few areas where the play fails the novel, but this is a minor compromise when adapting such an expansive work.

Winston and Julia come together through enormous obstacles, and the scene, when she lovingly makes him a cup of real coffee (dearly acquired amidst brutal rationing) as a metaphor for her feelings, is both tender and comic. These are souls not used to showing, let alone, experiencing passion, and watching their ritual enjoyment of something so simple is touching.

Although there is no privacy in this society, they are able to meet and make coffee—as well as love—in a shabby little apartment which they rent from the Landlady, played by Tracey D. Turner, who turns a minor role into a major statement regarding the “Proles,” and their subordinate position in this hierarchical country called Oceania. The Landlady’s apartment contains no telescreen, a device that both broadcasts party propaganda, and simultaneously monitors those who watch it. It’s basically an evil smart TV, and it’s not just extraordinary that Orwell envisioned this instrument in the late 1940s, but that he so perfectly described the mechanistic components of the totalitarian power structure, and how they would be employed, technologically, in the future. Ironically, Prime Stage Theatre performed this play the same week that WikiLeaks announced that certain government agencies were allegedly utilizing smart TVs to spy on people.

Johnmichael Bohach’s spare set comprises a few pieces of furniture (bed, couch, table, desks), and a Bauhaus-like array of video screens hung along the brick wall—arranged around a massive, stylized, Neo-Nazi eagle. All of it emphasizing the powerlessness of the individual, juxtaposed against the colossal image of Big Brother. This motif is pushed even further by the use of an overhead camera to literally shrink Winston’s projection, like something helpless viewed through a microscope… like a tiny ant being crushed by the pain of its consciousness, as it’s being tortured, relentlessly forced to repeat, “two and two make five.” Until he believes it.

Video designer Joe Spinogatti should be praised for his judicious use of such effects, which add to the grim atmosphere of the production without overwhelming it—not an easy balancing act in this theatrical era of video-as-panacea.

Orwell writes like someone peering back through the telescope of history at Machiavelli. Orwellian is as strong of a trope as Machiavellian, even though the latter had a four-century head start. What makes the novel, and the play “1984” so vital, is not just the abuse of power that they illustrate, but how intrinsic this is to human nature, an idea that can be traced back to the ancients, especially Thucydides.

Once again, Producing Artistic Director Wayne Brinda and his company have conceived a multifaceted and multi-generational experience that presents Orwell and his work to us in many forms, comprising lectures, events, an outreach program that will bring 1200 students to see “1984”, and even a staged reading of Orwell’s “The Road to Wigan Pier” (adapted from his 1937 book) on March 19th.

This is another work of his with particular resonance in 2017, especially as we are going through what many are now calling a populist upheaval. The frustrations Orwell described in northern England during the Great Depression could easily apply to the middle-America of today: “A thousand influences constantly press a working man down into a passive role. He does not act, he is acted upon. He feels himself the slave of mysterious authority and has a firm conviction that ‘they’ will never allow him to do this, that, and the other.”

Orwell is one of the few writers whom we can look back upon and not feel a kind of historical mitigation. His ideas and his language—which are intrinsically symbiotic, as he would insist—do not suffer with time. If anything, they grow stronger. It shouldn’t be a surprise that “1984” recently topped Amazon’s bestseller list, 68 years after it was first published.

Although the conclusion to “1984” is dark, there is something optimistic, and even Emersonian, in Orwell’s closing remarks to “Politics and the English Language”—redemption through self-reliance in expression: “When you make a stupid remark, its stupidity will be obvious, even to yourself.” He concludes that when we come across such “verbal refuse,” we can send it “into the dustbin where it belongs.”

In this age of “fake news” and “alternative facts”, Orwell can serve as a beacon for us in the fight for control of the language we think with, and ultimately, for the battle of consciousness itself.