Offering a Way Out

There are about two dozen men—black, white, young, old—gathered in a well-lit commercial space that occupies 704 Main Street, Sharpsburg. In the front window is a white cross with an orange life preserver draped over it that reads Jesus Saves Lives. Anchored against the interior wall, in front of floor-to-ceiling mirrors hangs a wooden cross—about six feet tall. Underneath an American flag is a small sign: Christ died for you.

There are nine rules that these men have to follow when they come here. Those rules include: Everyone acts MEDIUM – NO BIG SHOTS allowed, REMEMBER your Last repetition is as IMPORTANT as your First, NO Cussing, and This is your Gym PLEASE TAKE CARE OF IT. 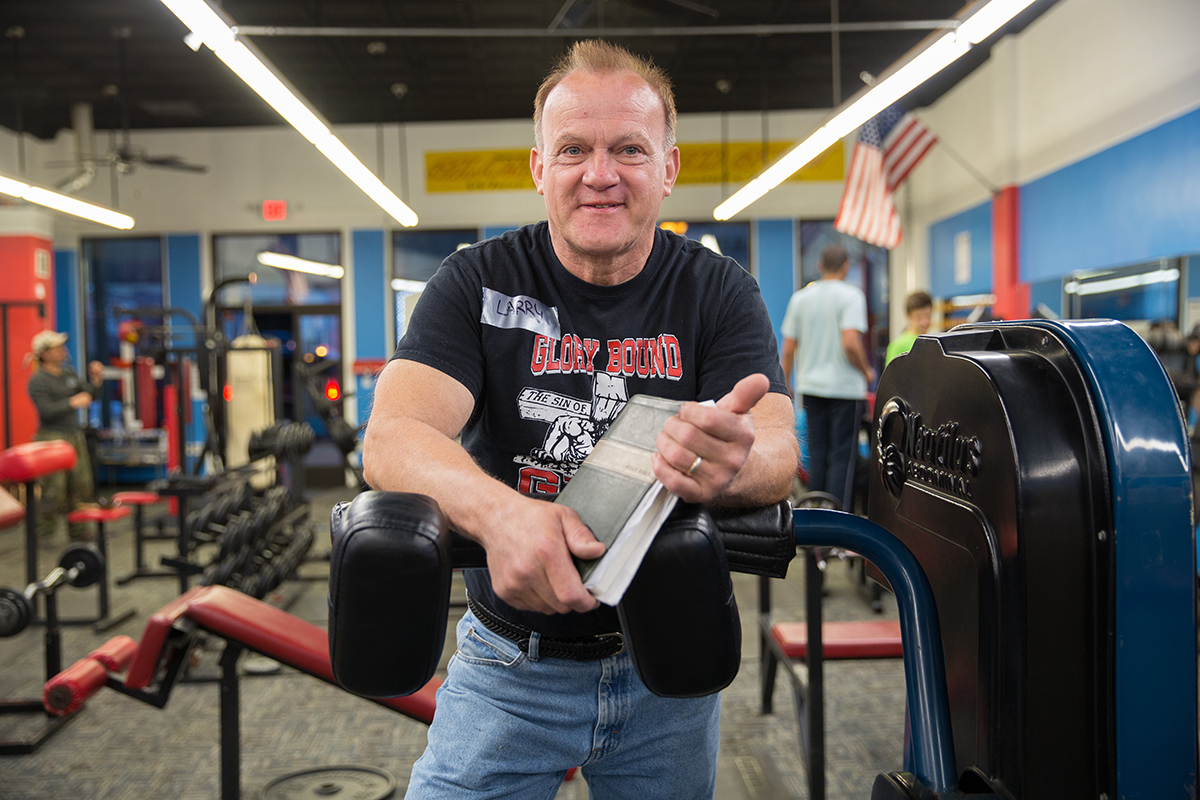 These two dozen men are about to pause their workout for The Message, which will last approximately six minutes. The Message will be delivered, as it is every Tuesday, Thursday, and Saturday, by Larry Arndt, the gym’s owner. It’s a gym that is free to any man from anywhere who wants to utilize it.

“Give God the respect he deserves!” a man named Den calls out as he straddles a bench press. Everyone knows this is Den the same way everyone knows who everyone else is: their names have been scrawled in black magic marker across a piece of silver duct tape stuck to their shirt.

Larry opens with a prayer, one that concludes with a chorus of enthusiastic “Amen’s!” from everyone.

And everyone follows Den’s instruction – except for Den himself, who from time to time chimes in with passionate agreement of The Message that Larry is delivering from the book of Mark, Chapter 16.

Jesus has just risen from the dead, much to the surprise of Mary Magdalene. And most likely to the embarrassed anxiety of Peter, who has just betrayed his beloved friend by denying him three times before the rooster crowed, as predicted. And Jesus, what does he tell Mary?

“Remember, Peter,” Larry says. “Be sure you tell Pete!”

That came as a real surprise to the other disciples, who were worked up enough as it was to see their dead friend standing in front of them. And of all the people Jesus wants to be told about his resurrection, old Pete is one of them?

That idiot that just betrayed you three times? Seriously, Jesus?

Which is exactly the point.

“Wherever we’re at,” Larry begins, standing up, “and whatever you’ve done in life and you feel worthless, like you let God down, no matter how bad we screw up – Jesus is there for us, will always forgive you and always welcome you back.”

“That’s right!” Den calls out as The Message concludes and everyone goes back to lifting weights.

You get the sense that everyone in the gym – whether 12 years old or 96 – gets it. Larry gets it, that’s for sure. He’s been there. Forty-six years ago he was far too busy getting high to have time to think about Jesus and his salvation. In fact, Larry was getting high so often that doing drugs became like a second job for him. “You work and then you have to get high. It’s not for recreation anymore. You have to.”

Things changed for Larry when he took a good, long look around him – at the people he idolized. People who were shoving needles into their veins, dying from an OD, dying from choking on their puke. I want to get where they’re at? He asked himself. Where are they at?

They were dying, that’s where they were at.

And that’s when he realized that it wasn’t cars or women or money or drugs that would fill the void in his heart – or anyone else’s for that matter. “Jesus Christ fills that pocket in your life,” he stresses.

Larry is 60 years old now, having enjoyed success installing commercial-grade glass for the past 38 years, which in turn has allowed him keep the Glory Bound Gym free to the men who use it. It was originally located in the Strip District, but he moved after 26 years for one simple reason.

“The $3 to get there was too much,” he explains, pointing to a group of teenage boys lifting free weights under a banner that reads Where people get a second chance. So, rather than leave these kids to worry about scraping up $3 to take the bus to the Strip District, he picked up stakes and moved the gym to Sharpsburg, where a lot of them live.

For Larry, life is all about making those kids – and many like them – happy. He engages them, knows them, knows what they’re up against: the drugs, the ODing, the heroin that seems to have run rampant in Sharpsburg and other neighborhoods across the city. And the kids come from all over – Homewood, Shaler, all over.

And if one of them gets something from that six minute-long Message that he gives every Tuesday, Thursday, and Saturday — if just one of them hears something, anything that clicks, makes an impact, resonates, then he knows the impact it can have on their lives. How it can change their trajectory. Help them.

“It isn’t the Bible,” he says. “It’s the instruction manual to life. Any answer is in there to any problem. We just don’t want to believe what’s there.”

“Most people try to find peace and happiness when it’s right there,” he adds, pointing to his Bible. “And it’s free.”