↓ Skip to Main Content
Search
Home › Article › Off the Wall

These climactic anti-war paintings on the ceiling under the choir show Jesus and Mary interposing themselves between soldiers on a battlefield. Lighting fixtures are mounted in the middle of the works.

Passing the little yellow Romanesque church next to Rt. 28 outside Pittsburgh, most drivers don’t give it a thought. Perched on a hill overlooking the highway, St. Nicholas Croatian Catholic Church in Millvale is not grand — its pews seat 350 worshippers — but inside is one of the region’s most interesting artistic creations. 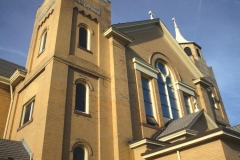 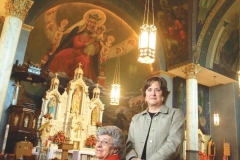 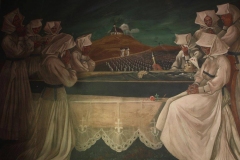 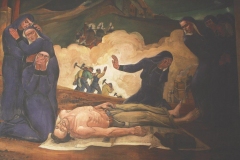 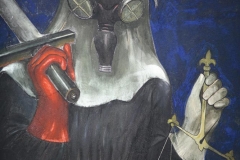 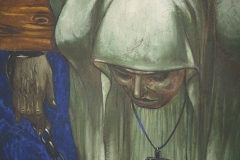 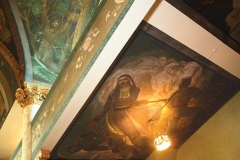 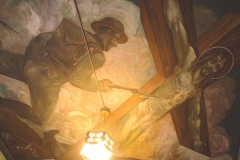 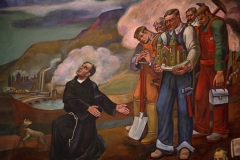 St. Nicholas has been the center of community life for generations of immigrants. You enter through a side door, walk up a set of stairs, and a series of most unusual murals comes into view. There’s Christ on the cross being bayoneted by a World War I-era soldier. Christ wears a barbed-wire crown. And on the low ceiling beneath the choir loft is a mural of Mary grabbing the bayonets of two soldiers on a battlefield.

The murals are a vivid mix of religious/cultural themes and commentary depicting the struggles of Croatians in America. Croatian immigrant Maxo Vanka painted them on the church’s walls and ceilings between 1937 and 1941, and the unorthodox work represents his views on war and the toll of industrialism. At the time, Vanka said, “These murals are my contribution to America.”

When musician David Byrne of The Talking Heads saw them, he called the murals “spectacular” and called Vanka “The Diego Rivera of Pittsburgh.”

Carnegie Mellon English professor David Demarest had a similar reaction when a friend invited him to check out the murals in the 1970s. “We came into the church, and it was really something else,” Demarest said, smiling at the thought. “It was just beautiful, striking, and surprisingly enough, quite unknown.”

A booster of Pittsburgh’s industrial history, Demarest penned a play about the church called “Gift to America,” which was put on at St. Nicholas in 1981. He also wrote the text for an illustrated guide to the murals that is free to anyone who visits the church. His literary contributions have changed perceptions of the artwork, both inside and outside the congregation, which had long harbored mixed emotions about its own murals.

In May, “Gift To America” will be staged again, this time for a fourevening run May 7-10 at the church. Directing the play will be Geoffrey Hitch, a professor in CMU’s Tepper School of Business. Hitch, who is one-quarter Croat, used to be with CMU’s Drama School and directed “Gift to America” in 1981. The one-act, hour-long play is a fictional walk through the church and discussion between artist Vanka and Father Albert Zagar, the church’s priest who commissioned the murals in the late ’30s. The two characters discuss the meanings of the murals, as theatrical lights brighten the paintings.

The murals came about when Zagar heard Vanka was in New York and sent for him. Vanka had married an American and had recently moved to this country. Zagar allowed the artist to illustrate his political views, and Vanka understood the opportunity he had. He hoped to make his name with the church murals. “Father Zagar was one priest in one hundred thousand courageous enough to break with tradition, to have his church decorated with paintings of modern, social meaning,” Vankahad said. Vanka labored from 7 a.m. to 2 or 3 a.m., accompanied by Father Zagar, who prayed as the artist painted. And though Vanka was not a religious person, the result was deeply spiritual. In a story for Time magazine in the late ’30s, Louis Adamic wrote, “It was well toward the end of May before the final murals complementing these on the back walls took shape and made the women on their way out after mass stop and weep and burn candles.”

Organizers of the May restaging of “Gift to America” timed it to coincide with the Pittsburgh 250 celebrations, and they hope the play brings the murals wider recognition as one of the region’s cultural treasures.

“The church is unique in that it provides a vision of heavenly beauty and a stark vision of earthly greed and violence,” said Charlie McCoelester, a professor of labor relations at Indiana University of Pennsylvania.

“I took a group of Polish filmmakers there, and they were shocked and amazed at seeing that kind of vivid depiction of violence in a church.”

After a post-Mass tour, parishioner Diane Novosel understood the bewildered look on a visitor’s face as he scanned paintings of heaven, a Croatian mother grieving over the corpse of her miner son and the Holy Spirit depicted as an eye with a dove as its pupil. “It’s an overload,” Novosel said.

A native of Lawrenceville and lifelong member of St. Nicholas, Novosel is president of the nonprofit Society for the Preservation of the Murals of St. Nicholas. She and Mary Petrich, another lifelong parishioner (who saw some of the scenes being painted), lead tours of the murals and are hoping to raise money to save the murals.

So far, however, they are witnessing the slow destruction of the artwork. Some murals have been repaired, only to be damaged again by water seeping through the walls of the church, which needs to be repointed and waterproofed.

“It’s one of the historical/artistic treasures of western Pennsylvania,” Demarest said. “It’s the repository of real history of people who lived in that valley, and the artwork they allowed to commemorate their lives.”

Jonathan Barnes is a Pittsburgh-based journalist and freelance architecture, engineering and construction writer.

Who Is Most Affected When Places of Worship Close?