↓ Skip to Main Content
Search
Home › Article › Who Is Most Affected When Places of Worship Close?

Who Is Most Affected When Places of Worship Close?

by Julia Fraser
Photo via rawpixel

The closing of churches, synagogues and other places of worship during the COVID-19 pandemic affects the practices of nearly 2 in 3 Allegheny County residents. But the hardship is not evenly shared.

Hardest hit are residents who regularly attend religious services, such as those who attend every day or at least once a week. In Allegheny County, that’s less than 30 percent of residents, according to 2018 data from a survey by Pittsburgh Today and the University Center of Social and Urban Research at the University of Pittsburgh.

Nearly 35 percent attend once a month or a “few times a year.” And 36 percent of residents say they never attend religious services.

But differences in worship practices and spirituality can be stark, depending on the age or race of residents. 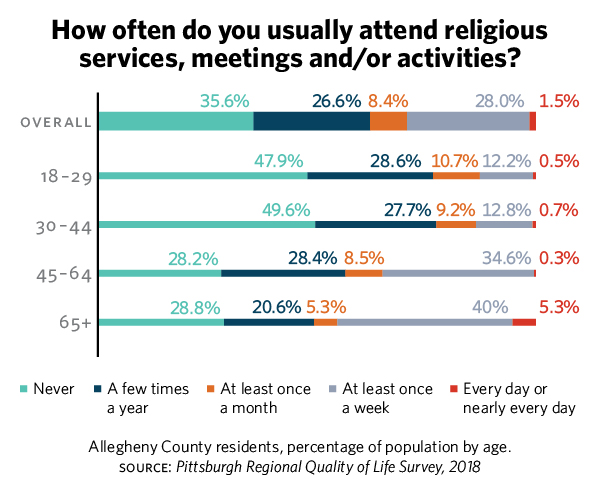 Older Allegheny County residents are the most likely to have their worship practices disrupted by social distancing orders intended to control the spread of COVID-19.

Nationally, 22 percent of Americans aged 22–37 years say they never attend religious services, according to a 2018 Pew Research Center study. Pew research suggests the United States saw a surge in who describes themselves as atheist, agnostic or “nothing in particular” from 17 percent in 2009 to 26 percent in 2019.