Nate and His Bees

The bees arrived yesterday, via Two Day Priority, from an apiary in Ohio. Three pounds of them. Five thousand bees and one queen buzzing around in a wooden crate made of scrap wood kinda stapled together. There are screens on either side so that you can actually see the bees. And hear them. All 5,001 of them. 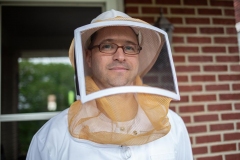 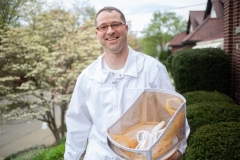 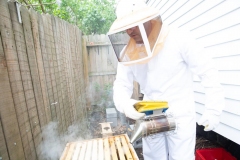 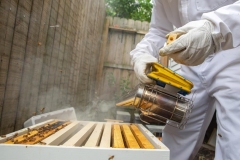 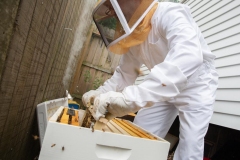 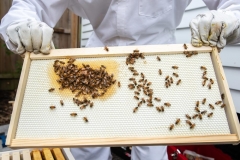 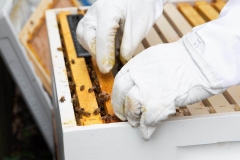 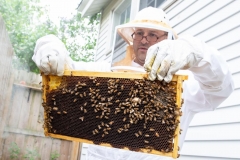 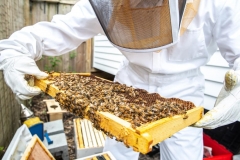 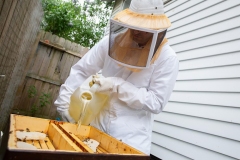 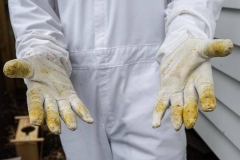 Nate was supposed to go down to the Post Office’s distribution Center on California Avenue and pick them up. But he was in Key West, working his shift as a flight attendant for Republic Airlines.

No one at the Post Office wanted to touch the box. Everyone is scared of the bees, the possibility of them somehow gnawing their way through the screen.

“They hate me down there,” Nate says.

They were supposed to keep the box until today, for Nate to pick up. Instead, they convinced his mailman to deliver them to their house on Observatory Hill.

When they did, Nate had to convince his wife, Trish, to pick up the box and place it into the hive.

He got the Russian bees this time. Last year he got the Italians. They didn’t make it through the winter. So, he paid a little extra for the Russians.

“The Russians are bred to resist mites better,” he says. “They’re more sophisticated as far as producing their brood. They take into account the environment and the dearth period.”

“Which is?” Trish prompts him.

“The dearth period is when the plants stop producing nectar,” he says. Some years it’s worse than others. When that happens, the Italians go nuts. “They keep producing their young but there’s no food.” So, the Italians get angry. Just go crazy.

But not the Russians. “They’ll assess what’s going on and will stop producing.”

There are three beekeeper’s hats on their front porch. Two sets of elbow-length gloves, one beekeeper’s jacket and one full body suit. When fully outfitted, the look is something akin to something NASA would prepare for a lunar landing. There’s also a book. Beekeeping for Dummies, 4th edition.

“But you’ll make coffee and sit outside and watch your bees every morning,” Trish points out.

“Well, that’s because bees are really, really interesting,” he says. “They’re fascinating. They’re smart instinctually but individually really dumb.” He only got stung once. He was sitting next to the hive peeling oranges. “It was my fault,” he says. “They were telling me they were upset and I didn’t listen. They stung me in the nose. It really hurt.”

Nate got into bees because, well, he gets impulses and goes nuts and likes to do crazy things sometimes. There was the paraglider. The sign making business. Oh, and the bat boxes…

“But she put the kabob on those,” he says. “I’m trying to see how far I can push my wife before she divorces me,” he says.

He paid a hundred and twenty-one bucks for the bee box. Plus, three dollars to have the queen marked with a white dot so he could easily identify her. And, twelve dollars and fifteen cents for postage. The 5,000 workers that Nate is about to dump out of the box and into the hive are all females. Irritated females because the Queen that’s in the little cage inside of the box is not their queen. Hopefully, by the time the queen and the workers are finished chewing through the piece of candy that separates them, the Queen’s smell will have permeated the box and the worker’s loyalty will have shifted from their queen to this one.

If they don’t, they’ll kill her.

He won’t get any honey out of them for the first year because they need it to survive the winter. If all goes well, he’ll get it the second year. Hopefully, with the same bees.

“The book tells you that you only need five hundred dollars to start and it requires forty hours of work per year,” he says. “It’s a total scam. I’m three thousand deep into it and have lost sleep over my bees.”

“You talk to them like they’re cats,” Trish says.