The stroller is one of those sporty, three-wheeled versions, the kind that athletic moms like to push around suburban neighborhoods while huffing out a cardio burn. This one is parked in a crosswalk, about two feet from the curb, right on the corner of Market and Fifth in the shadow of the Fairmont Hotel. In the space normally reserved for a swaddled baby sits a black Bose speaker, releasing a steady bass beat into an inky sky on a random Thursday night. 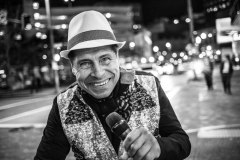 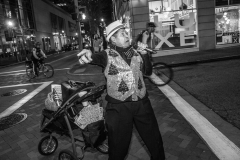 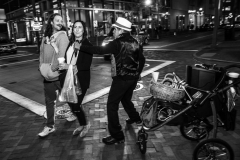 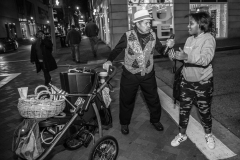 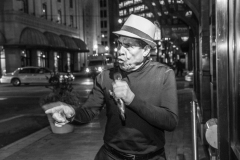 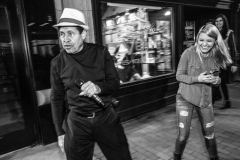 “I hope it’s not my main cord,” he worries, fiddling with the wires as the beat continues.

“Hey!” he calls out, momentarily distracted from his input jack as four city policemen ride by on their bicycles. “Pittsburgh’s Finest… on the job!” Two of the cops wave as they all pedal towards Market Square, just as a trio of young black kids walk by. One of the girls stops, turns around. Giggles. Changes her mind. Then changes it again, walking up to Frankie as he instinctively tilts the mic down for her.

“Oooh yeah!” she sings, moving to the beat.

“Oooh yeah!” he sings back as they both ignore the static. The duet continues, striped Adidas dancing next to black orthopedics as a PAT bus stops as the light. The driver waves. Frankie waves back. Smiles.

“Oooh yeah!” the girl continues singing, giggling, before launching into a rap that doesn’t match the beat coming out of the Bose.

Frankie holds the mic for her as one of her friends holds up his iPhone. She finishes, breathless, more giggles, and rejoins her friends.

“Thank you!” the boy says, shaking Frankie’s hand before they disappear down the street.

Another pedestrian walks by. “Hey!” Frankie calls out, walking in step with him as he offers his mic.

“I can’t sing,” the man says, hurrying along.

“When you say you don’t sing, you’re missing out,” Frankie says. “I used to work at the Hilton over there…”

“Long time ago. Before you were born,” he replies, not missing a beat. “Business men, the first thing they say; ‘I don’t sing, man.’ Just try. Try is everything in life. Don’t ever say you can’t do something. I taught high school for 40 years…”

“You know, over there,” he replies, throwing his thumb back over his shoulder. “Forty years of teaching high school kids and I’m not burned out. The idea is… we need to love them. Tell them how good they are. The human heart can’t turn aside when they see that a guy is nice. I talk way too much. But the idea is, I’m seventy-nine… don’t print that.”

“Okay, print that,” he replies. “I’m seventy-nine. God is good. Look, we all hide so much, man. What I do, singing down here, is something I love.”

Frankie, how do you spell your last name?

“This is paradise down here, man,” he says, pushing the stroller. “Paradise.”