Average temperature of the water: mid to upper 60s. The green hue of the water comes from a water treatment developed by Penn State that keeps the water clean without expensive chemicals. The reservoir can hold up to 800,000 gallons and three 36,000-gallons-per-minute pumps make the ride run. If you’re “lucky” enough to get stuck under one of the waterfalls, prepare to get drenched with 200 gallons of water. The 7.5-acre Raging Rapids was installed in the winter of 1984. The biggest complaint management gets about the ride? “I got wet!”

Everyone has at least one, and probably way more memories of Kennywood: Finally getting behind the wheel of the blue car on the Turnpike. Stealing a kiss on the Old Mill. Begging Mom for another hour at the park. Putting up with your own whining kids when you say it’s time to leave. The taste of Potato Patch fries. The smell of a freshly oiled track on the Jack Rabbit. Finally getting up the nerve to ride the Sky Coaster and then regretting it the moment you’re strapped in. 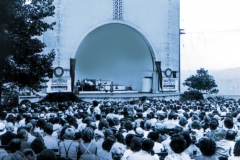 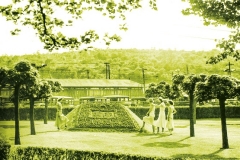 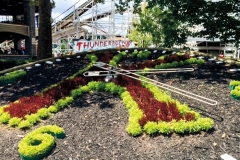 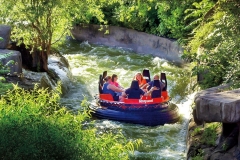 It’s been 120 summers since the Monongahela Street Railway Company opened a small trolley park and picnic area known as Kenny’s Grove less than 10 miles from Downtown. And now our beloved Kennywood is one of America’s oldest parks and one of only two designated as a National Historic Landmark. We asked Pittsburgh notables and those most familiar with the park to share their favorite recollections.

I fell in love with Kennywood when I started going there at age 6 in 1936. I worked there in high school and came back 16 years ago. Now, I’m there as a hobby from 11 a.m. to 4 p.m. Monday through Friday at the refreshment stand in the ParkVue Restaurant, the main cafeteria.

Back in the old days, we worked from 11 in the morning until midnight, when the park closed. And great bands like Harry James and Xavier Cugat would come in every night and they would broadcast over WCAE, nationwide, at 11 p.m. with the big band sounds. I can still hear the radio announcer from Kennywood that would signal, 10, 9, 8 down to zero, “Emanating from beautiful Kennywood park in beautiful Pittsburgh, Pennsylvania, the music of Harry James and his orchestra.” The bandstand was always packed. You couldn’t move. The world needs more Kennywood parks.

Andy Quinn—4th-generation employee and descendent of the original owners

We used to have both a floral clock and floral calendar right in front of Kiddie Land that was always planted in the springtime. The clock was functional with this big, sweeping hand built into the hillside. It was absolutely gigantic, spanning about 20 feet. The calendar was made up of different flowers that were arranged into numbers and there were boxes you could pull in and out of the garden bed that we would change every day, and the month was spelled out across the top using flowers, too. Well, one morning, it was May 25th, and I’m walking around, and the park had opened but the rides hadn’t yet. As I’m going past the floral calendar, I notice two ladies looking at it. One turns to the other and says. “I wonder how those flowers know what day it is?”

We used to reuse everything if we could. I used to run the restaurant and cafeteria in the ’70s and everything came in No. 10 cans. Every one of those cans—every one of them—we’d cut the top lid off after it was emptied, put it through the dishwasher, and send it to maintenance to be used for paint, holding nails, etc. That was the rule of thumb in those days. No one threw everything away.

There are also the urban myths. People always asked, “Are there really snakes in the Old Mill? Are there really snakes in the Merry Go Round?” And I’d always answer with something like, “No, the aardvarks ate them,” just to perpetuate one rumor with another. And of course, the whole “Kennywood’s Open” thing. Nobody alive can figure out, and I don’t even think my forefathers can figure out, where that came from. If you’re local to the Mon Valley, you knew exactly what it meant, though: your zipper was down.

My grandfather worked at the Bettis Laboratory, and they always had their annual picnic at Kennywood. I was in sixth grade in the summer of ’91 and we were there with the whole family. Dad wasn’t into water rides, but we finally convinced him to go on the Raging Rapids because the sun was just beating down and the humidity was terrible. We’re standing in line for what seems like hours and everyone is telling Dad, “You won’t get wet. It’s not that bad.” Which, he wasn’t buying, especially since he saw a vendor selling rain ponchos.

Mom wanted to buy one, but Dad said, “I’m not wasting my money on that.” Finally, it’s our turn. We get in the raft, and the water has this greenish hue—definitely not Brita-filtered. We start floating, ’round a corner, and Dad says, “Is that a waterfall?” Sure enough, the raft spins and he gets right underneath it. That water had so much pressure that it knocked the glasses right off his face. The visual was off-the-charts hysterical. He whipped his hair back, put his glasses back on and gave a death glare to my uncle. He was totally soaked, had nothing to change into, and spent the whole rest of the day trying to get us out of there. He was so uncomfortable he finally said, “If we go home, I’ll turn the air conditioning on.” We were all like, “Whoa! Dad’s actually going to turn the air conditioning on? He really wants to get home.”

Brian Butko—author of the “Kennywood: Behind the Screams” Trilogy

I’ve lived my entire life in West Mifflin, so I’ve been going yearly for half a century. We grew up thinking everyone had an amusement park in their town. Of course, childhood memories are the strongest: the Rotor, the Ghost Ship, and my favorite neon sign of bursting fireworks near the Cafeteria. But my strongest Kennywood memory didn’t happen at the park. One sunny afternoon we were anticipating all the fun and aromas of a spring day: fresh flowers, fresh paint, fresh tar on the gravel parking lot. I believe it was Easter, which was sometimes Opening Day. Mom was starting to back out of our garage in her 1969, two-door Tempest. My sister and I were squabbling. Mom warned us to stop or she’d pull back in. I guess we didn’t listen because when she’d had enough, she shifted back into drive and parked the car! We shouted “No, sorry, we’ll be good,” but it was too late. There would be no Turnpike, no Spin Art, no Kennywood that day.

I was actually watching cartoons one Saturday when my dad came in and told me to get dressed. So, we hopped into the truck and he pulls into Kennywood and says, “You’re getting a job.” I filled out an application and got a call a week later telling me to report to the cafeteria. I was only 16 and too young to work in maintenance so I started off as a bus boy. When I was 18, I was put on as a mechanic on the Log Jammer. At the same time, this girl, Susan, got a job at the Log Jammer as a ride operator. Back then, everyone who worked with me had a nickname: Kool Aid, Bam Bam, Ranger Rick, Otis… I used to wear moon boots so everyone called me Moonie J. Boots. I was talking to Kool Aid about Susan and he’s actually the one who convinced me to ask her out. Our first date was on a nice summer night. Clear, with all the stars out and I think it was a full moon. We went for a ride on the Old Mill and hung out at the park for the rest of the night. And a few years later, in 1987, we got married.