In the French manner

A long, sweeping lawn balances the width of landscape architect Patty Kendall’s home in Sewickley. A giant black walnut and other specimen trees add the patina of age, as does the Boston ivy that covers the facade.

Turn onto the discreet drive on a pleasant street in Sewickley and suddenly you feel as if you’re in the French countryside. A long lawn, impeccably maintained and dotted with mature trees, leads to a French manor house that spans nearly the width of the property. It sits regally near the back, surrounded by gardens both formal and relaxed. The morning sun makes the buff-colored stucco glow, and light bounces from the many French doors that line the façade. Thick green ivy climbs the walls and circles the windows, giving the home a patina of age and rootedness. 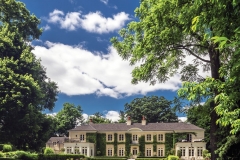 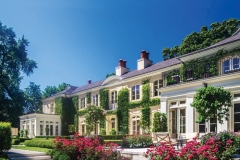 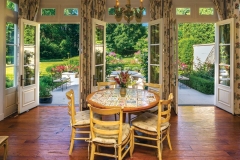 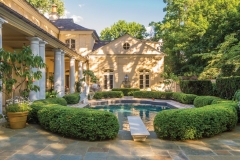 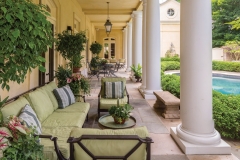 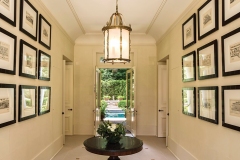 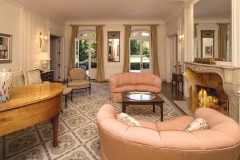 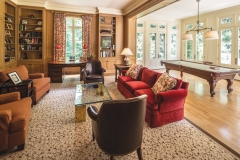 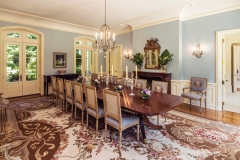 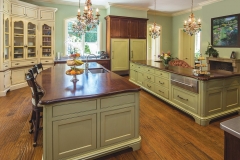 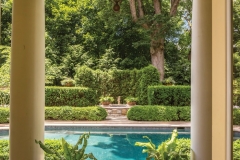 Ten years ago, this vision of elegant living was just that—a vision. The reality was a small ranch house on a long, narrow site. But what caught Patty Kendall’s eye was the lot: two prime acres in the heart of Sewickley, an easy walk to the stores in the village, and, for her four children, to school and friends. For Kendall, founding partner of Kendall O’Brien Landscape Architects, the challenges of the property were also the source of much creativity.

Looking ahead, Kendall could envision perennial, rose and vegetable gardens with terraces opening onto them. She wanted a pool that didn’t look like a pool when winter arrived, intimate spaces for the family to enjoy privately and public spaces that took advantage of the gracious lawn. But most important was a house that incorporated the landscape into its design.

“Because the site was narrow, I wanted a house that was one room deep,” Kendall says. “We looked for a style that would fit that concept, with all of the doors being open to the outside for light.” A tour Kendall and her husband, Jeff, took through the French countryside inspired them. So did a house in Chicago she saw featured in a design magazine. That led the couple on a search for its architects and a trip to Chicago to meet with them. “They said the house I was describing was a French manor home.” And so began the couple’s collaboration with the architecture firm Hammond Beeby Rupert Ainge, with Dave Pickert serving as project architect.

“We spent a lot of time siting the house,” Kendall says. “We sited it at the very back of the lot to have a long yard to balance the width of the house. I was also inspired by our trip to the Rodin Museum in Paris. They have the open line down the middle and gardens on either side, and I think the museum is U-shaped like this house. The Rodin inspired me to lay out the lawn like I did.”

While a traditional country house would have a gravel driveway in the front, Kendall chose to place the drive on the side, with a garage courtyard disguising the utilitarian part of the home. That enabled the lawn to sweep to the front entrance terrace, which is flanked by patios on either side. The formal front is typical of the style—the clipped hedges defining smaller garden areas and large, open lawn panels. A perennial garden and herb gardens were placed off the breakfast patio, while a vegetable garden was placed near the library patio.

“I wanted two patios—a breakfast patio outside my kitchen that was sited for morning light, and one outside the library for balance and because I wanted every room to open directly onto garden space. I wanted the inside and outside space to function as one.”

That concept is beautifully realized in the back of the home, a lush oasis Kendall designed to have interest in every season. Hardscape and water features do double duty, since the back garden is visible from rooms that open both ways. “The design intent was to have a swimming pool for the family, but also a garden pool from inside the house. The way I accomplished that was to put a hedge around the pool so that in winter, you don’t see a dead pool cover. I also had it prepped to be a fountain, and the hot tub also functions visually as a fountain and a focal point coming in the front door.”

Rather than go with an expected French country décor inside the home, Kendall worked with interior designer Suzanne Friday to achieve rooms that were timeless.

“My goal for the interior was for the entire house to be quiet and have soft colors. I don’t like a lot of stuff or a lot of color. I wanted everything to be soft and soothing and calm. I didn’t want it to be grandiose. I wanted it to be a comfortable family home.”

While the rooms are spacious, they’re not overly large or designed for show. The lower level holds a home theater and music room filled with instruments, which was formerly a skateboard room “until too many kids got hurt!” An exercise room and a playroom above the garage, complete with ping- pong, shuffleboard and foosball, also accommodates the children, as does a family room off the kitchen. The kitchen features a fireplace, seating area and two oversized islands so the whole family can congregate informally.

“I tried to lay out the house so it could be used by different groups at different times. The kitchen, playroom and work-out room on the active side, and the library and guest room on the opposite side so it could function for kids and adults at the same time. But the kids ended up using the living room to study,” Kendall laughs.

Indeed, nothing is too precious to be used, including the giant dining room table once owned by Chef Hector Boiardi or “Chef Boyardee.” It seats 20 and is perfect for hosting holidays for Kendall’s extended family. The robin’s egg blue on the walls was Kendall’s father’s favorite color. “He painted everything that color, so consequently, it was very soothing and familiar to me. I took a Farrow and Ball color and lightened it until it was the perfect color and then matched the rug to it.”

The entire project took three years to plan and two to build. The Kendall family lived in the original ranch for eight years “while [Kendall] figured out what to do,” and then temporarily purchased another house at the end of the drive to live in while construction was under way. Though trained as a landscape architect—she started her firm in 1985 in part so she could work from home while her children were young—Kendall found a melding of all her talents in her French manor home. “I like that we have this big private space nestled in this great little neighborhood, the heart of Sewickley village,” she says. “It’s the successful marriage of a nice house and keeping it in a neighborhood setting. We don’t have to be in Sewickley Heights.”

Mario’s Corner of the World in Sewickley