Solveo Wellness opened its doors as Pittsburgh’s first medical marijuana dispensary in February 2018 to customers young and old who braved the cold in a line that wrapped around its Squirrel Hill building. It was warmer in August, but the scene was the same when the dispensary added cannabis flower to its menu. If that wasn’t enough to jolt pot’s illicit image, Pennsylvania’s auditor general went public as an advocate for legalizing it for all adults, ailing or healthy, as a way to reap nearly $600 million a year in taxes to apply against the state’s chronic budget deficit.

Public attitudes about marijuana have dramatically softened in recent years, despite the fact it remains an illegal drug of the highest order in the eyes of federal law enforcement and the U.S. Food and Drug Administration hasn’t approved it as a treatment for most medical conditions.

And legalization is on the fast track. Medical marijuana is now legal in 33 states and 10 states and the District of Columbia have legalized pot for recreational use among adults.

Most of the states that have legalized pot have done so in the past few years. Legalization, as a result, has outpaced research into the medical use and benefits of cannabis, as well as answers to important public health and safety questions, such as how it affects the rate of pot use among Americans and whether it poses a safety hazard on roads and highways.

Meanwhile, the young legal cannabis industry is booming, generating billions in tax revenue with the promise of more to come. “When we look at the metrics to see where this is going, it’s clear that it’s going to be very difficult to put the genie back in the bottle,” said John Kagia, executive vice president of New Frontiers Data, a Washington, DC business analytics firm specializing in the cannabis industry.

In states where it is currently legal, the cannabis market is expected to mature at a 14.7 percent annual growth rate and expand an $8.3 billion industry into a $23 billion industry by 2025, a New Frontier analysis suggests. And that’s assuming no other states legalize marijuana, which defies current trends.

One reason is that cannabis is emerging as a golden goose for revenue-strapped states.

Washington, a full-legalization state, collected $319 million in excise and sales taxes in 2017, its cannabis control board reports. Pennsylvania, with a 70 percent larger population, hasn’t made recreational marijuana legal, but could earn $581 million a year if it did, the state auditor general estimates. The estimate is based on a 35 percent state cannabis tax. If a 1 percent local sales tax is added, Allegheny County could expect $3.8 million.

Pennsylvania’s medical cannabis program registered 62,000 patients in the first eight months, which is on the high end of expectations. “We’re farther along than states like New York and Illinois were when they were two years into their programs because we haven’t had issues with registration,” said Patrick Nightingale, executive director of the Pennsylvania Medical Cannabis Society and Pittsburgh NORML.

Cannabis is also a hyper-local industry, adding to its attraction among states. Federal drug laws prohibit shipping it outside of a state where it is legal. As a result, it has to be grown, processed, distributed and sold within each state, sustaining local jobs and investment. In Colorado, the first state to legalize recreational marijuana, cannabis employment accounts for 5.4 percent of all job growth since 2014, according to a Kansas City Federal Reserve analysis.

Allegheny County residents were convinced that full legalization is the route to take even before the auditor general’s July 2018 report. A month earlier, 62 percent said they favored making cannabis legal for recreational use among adults and only 32 percent opposed it in a Pittsburgh Today-University of Pittsburgh University Center for Social and Urban Research survey.

This softening of views comes at a time when police across the U.S. arrest 599,000 people a year for marijuana possession—21 percent more than arrests for murder, robbery, rape and aggravated assault combined, according to the latest FBI data. Arrest data also underscore the argument that legalization could narrow racial disparities in drug arrests. African Americans are 3.7 times more likely than whites to be arrested on marijuana charges even though pot use among races is about the same. 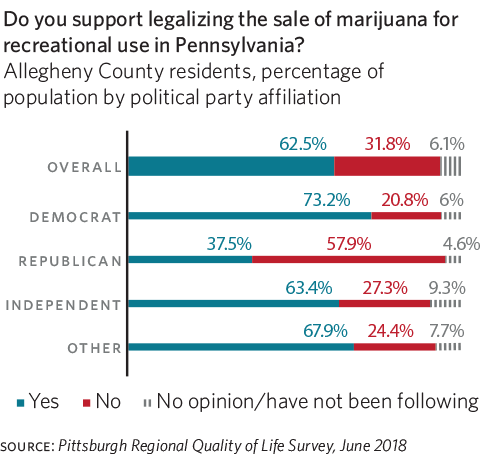 U.S. drug policy is holding fast on classifying pot with drugs like heroin and LSD as a Schedule 1 controlled substance with no accepted medical use and a high potential for abuse. The stricter schedule lets the Drug Enforcement Agency more tightly restrict access to cannabis, making it difficult to research and posing several hurdles that slow growth of the legal cannabis industry.

Major banks balk at serving the industry, concerned that doing so exposes them to possible prosecution under federal racketeering laws. About 400 financial institutions are working with cannabis businesses nationwide, but most are small credit unions or state-chartered banks. Legal cannabis is largely a cash business with limited access to capital available to other industries.

With interstate commerce off limits, cannabis businesses must set up production in every market they serve, greatly increasing the cost of expansion. And federal law makes it tough for cannabis companies to claim standard business deductions, increasing their tax burden.

Cannabis taxes are a critical factor for an industry under pressure to keep prices competitive. Unlike most industries, legal cannabis competes with a well-established black market that consumers are familiar with and that is exempt from the taxes and costs of licenses, quality control, reporting and other regulatory requirements that apply to legal growers and sellers.

California’s recent slump in cannabis tax revenues is blamed in part on high taxes. The state levies a 15 percent excise tax on retail cannabis sales, a weight-based tax of cultivation, and cities and counties add a local sales taxes as high as 20 percent on pot, which also is subject to regular state sales tax. In Washington, state officials reduced a 25 percent tax on each of the three steps in the supply chain to a flat 37 percent retail tax after the price of legal recreational marijuana proved too steep to lure consumers away from the black market.

National legalization, although crucial for industry growth, would likely come with additional taxes to meet the federal government’s desire for a piece of the pie. If pot were legal in all 50 states, a 15 percent federal sales tax alone would generate a total of $46 billion in new revenue for the U.S. Treasury by 2025, a New Frontier analysis suggests.

Still, the outlook remains positive for the emerging industry. “As cannabis has become a kitchen table issue, there’s been greater interest in its medical use, even among people who might not be cannabis enthusiasts by any stretch but are suffering from a condition and looking for some relief,” Kagia said.

NEXT in Part II of our look at legal marijuana: Legalization is moving faster than questions about of marijuana’s impact on public health and safety can be answered.