The Big House, built in 1929 by C.G. Dorn, is the centerpiece of The Lodge at Glendorn containing dining rooms, the bar/billiards room and several suites.

On a pristine morning after the season’s first snowfall, determined anglers cast their flies into streams not yet frozen. Eight inches of snow blanketed the landscape, but inside the Big House a fire crackled as guests enjoyed a hearty breakfast and the view through giant windows. Or they could look the other way at the stunning Hetzels, part of an extensive collection of important Pennsylvania landscape paintings that line the walls. 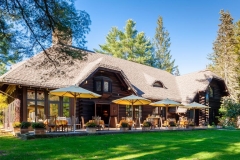 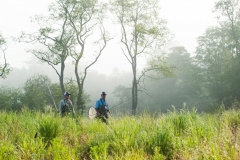 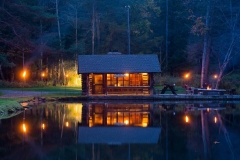 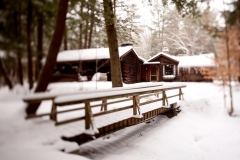 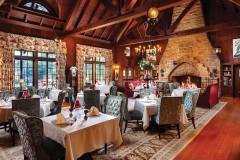 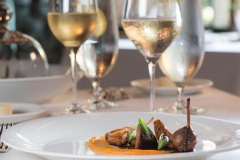 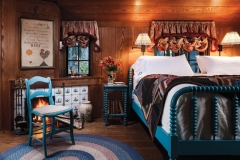 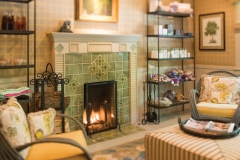 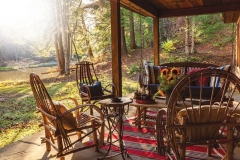 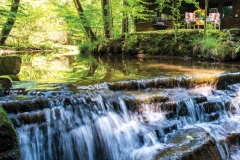 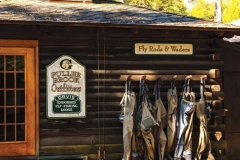 Welcome to The Lodge at Glendorn, a luxury nature resort that was once a great family camp, and still is. Despite having all the amenities of a five-star hotel, it feels wonderfully nostalgic and personal.

Nestled in the woods of northwestern Pennsylvania, the 1,500-acre retreat is just minutes from Bradford, an hour from Erie or Buffalo, and a three-hour drive from Cleveland and Pittsburgh along sleepy, scenic highways that border the Allegheny National Forest. When you arrive, it’s almost as if you’ve driven back in time. The bucolic forest setting remains virtually unchanged since Clayton Glenville (C.G.) Dorn bought the property and built the first cabin there in 1929.

Of course, back then, much of the land was clear cut of its splendid timber, a fate that may well have struck a second time if Cliff Forrest had not intervened. The Pittsburgh businessman bought Glendorn at auction in 2009, a purchase made more with his heart than his head.

“I’ve been out West to some great resorts, but I never saw anything like Glendorn,” Forrest says. “For years I was looking for a place for business where I could have a retreat, and I wanted a trout stream. This was the dream of dreams. The ambiance of Glendorn—I don’t think there’s a place I’ve ever been that touches it.”

Eighty years of protected custody have enabled the trees to flourish, the streams to run clean and wildlife to abound. Hundreds of miles of trails are available for hiking, biking and snowmobiling on the property and nearby in the Allegheny National Forest.

The variety of outdoor pursuits that first attracted the Dorn family now include trap, skeet and sporting clays, guided and upland bird hunting, kayaking and canoeing, cross-country skiing, sledding, snowshoeing and 7.5 miles of privately managed trout angling and lakes. Skilled, friendly guides are on hand to teach or assist. A pool, tennis courts, croquet lawn, billiards room and other activities ensure that guests of all ages, in all seasons, will not lack for diversion.

Yet what has made Glendorn legendary is something far more difficult to achieve: peace and quiet. One of only several dozen Relais & Chateaux luxury properties in America (there are 546 in 62 countries on five continents), Glendorn embodies this prestigious association’s criteria: courtesy, charm, character, calm and cuisine. And it is the first Relais & Chateaux endorsed by Orvis, which acclaimed it as the Orvis Fly-Fishing Lodge of the Year in 2016—the first east of the Mississippi.

Much like Blackberry Farm in the Smoky Mountains, or The Point in the Adirondacks, Glendorn offers luxury in the guise of simplicity. There’s nothing flashy or even all that modern about the resort, and its appeal will be lost on those who require multi-jet showers and cutting-edge design. What it does have is history, beauty, superb dining, all the comforts of home—and the feeling of being one of the family.

Eighty years of protected custody have enabled the trees to flourish, the streams to run clean and wildlife to abound.

It helps tremendously that Glendorn is relatively small—it has 16 uniquely designed accommodations, most of which are private guest cottages. But there are also several suites and guest rooms in the main lodge, which is called the Big House. This was the first structure built by the family patriarch, who was affectionately known by his six children and many grandchildren as Bondieu.

C.G. Dorn made his fortune in oil using a technique he developed called back-flooding to revive exhausted oil fields. Forest Oil thrived during the Depression, and Dorn wanted a place where his family could gather on the weekend and during the summers. A staff kept the Big House at the ready, with a chef, maids, guides and other employees present to ensure a relaxed visit. But as the family grew, the Big House wasn’t big enough. The children began to build their own cottages on the property—small cabins scattered here and there within easy reach of the main lodge, but more private. Their names and belongings still grace the cottages, which feature vintage furnishings and numerous family mementos.

“You can’t create character, you can’t buy history. And Glendorn has such great history,” says Forrest. “What’s remarkable is they left everything, the photographs, the books, the monogrammed lighters from Zippo. They left all these knives that [Dorn’s son] Forest collected that date back to the ’30s and ’40s. It was going on the fifth generation of the family.”

Each cabin is unique, and they range in size from one and a half to five bedrooms. All the things a guest would expect to be fresh are, including the crisp, monogrammed sheets, thick towels and good mattresses. But family photographs and old prints decorate the walls, the chairs testify to many hours spent resting by the 43 working fireplaces, and a hodgepodge of worn books offer charming companionship.

With the passage of time, the Dorn family and Bondieu’s 140 heirs spread across the country. They were reluctant to invest, even when they opened the property to the public in 1995. By the time Forrest came aboard, Glendorn required considerable updating and a sizable investment. Under his ownership, extensive repairs and upgrades have been made, and more are planned. Interior designer Gil Walsh, whose projects include the Duquesne Club, was brought in two years ago to update several of the cabins and the Big House with her signature blend of relaxed elegance. More than $500,000 was spent on turning the old playhouse into a small conference and fitness center, and Richard’s Cabin has been designed to accommodate corporate retreats.

One of the most popular additions to Glendorn is the Forest Spa in the former pool house. The full-service facility offers numerous services designed to promote health, wellness and relaxation. Run by Jennifer Herzog, the spa offers a variety of massages (Swedish, Deep Tissue, Hot Stone, Pregnancy) as well as beauty and body treatments. A signature Wine Lovers Body Treatment uses crushed grape seeds to exfoliate, a wine and honey mask to draw out toxins, and olive oil and grapeseed extract to moisturize.

For those who would rather drink their wine, an ample cellar is part of the fine dining experience at Glendorn. Executive Chef Katelyn Steffan, formerly of Lake Placid Lodge, favors seasonal ingredients and local products for the resort’s exceptional dining. A four-course dinner might feature butternut squash soup, pesto gnudi, a veal, venison or monkfish entree, and an apple caramel soufflé. Guests gather for cocktails by the fire in the Billiards Room or may request dining elsewhere on the property. Breakfast, which is included, and lunch are served on the stone porch with its rustic hickory chairs.

Forrest plans to install a vegetable garden this year that can be used by the kitchen, and a perennial garden to enhance the landscaping. He spends as much time at Glendorn as he can with his family, shooting skeet or walking to the trout hatchery, and he hopes to build his own home there in keeping with the resort’s vernacular. “I want to maintain that feeling that it’s a different era.”

Five years ago, Forrest’s goal was to make Glendorn “one of the greatest retreats in the Northeast.” Last year, Travel+Leisure Magazine chose Glendorn as the No. 1 Resort Hotel in the continental U.S. and No. 6 in its list of best hotels in the world.