A Fine Suit of Clothes

You’re never going to see him cross his arms. Why risk wrinkling his suit? You’ll also never see him walking around with scuffs on his shoes, covered in dirt from the last steps he took. No chance he’s going to ruin his soles. Has about a gazillion of them. He likes the suedes.

Likes his clothes, too… because the clothes? You put on a custom-made suit and shirt, and baby, you’re feelin’ the difference.

He feels it. Sees his clients feel it. Even if they walk in looking good already, Master Clothier Ernest Baugh is going to make them feel even better by the time he’s done with them.

In four to six weeks, the 37 measurements he takes with a Dormeuil tape measure will be turned into a suit that will run you anywhere from $1,200 all the way up to $15,000 when it’s fabricated of silk with diamond fragments. Fabric so delicate it might see the light of day just once a year. If that. But hey, why not?

It was 1976 when he realized he wanted to be in the clothing business. At the time, Ernest was wearing leather pants and fancy Knick Knick shirts. Polyester. Button Down. Wild, vivid colors. The gig as an underwriter for a commercial union insurance carrier wasn’t going to cut it.

So Ernest got a job at Michael’s Boutique on Wood Street, downtown. One of eight salesmen. He rose to the top with relative ease. His boss liked what he saw. “Better to have one good horse than a lot of ponies,” his boss said.

Back then, Wood Street was the place. Monday and Thursday nights were the hottest, when all the stores were open until 9 p.m. The steel mills were poppin’, Franco and Frenchy were shopping on Wood Street, looking for platforms and bell bottoms. It seemed that money was good for everyone, everywhere. 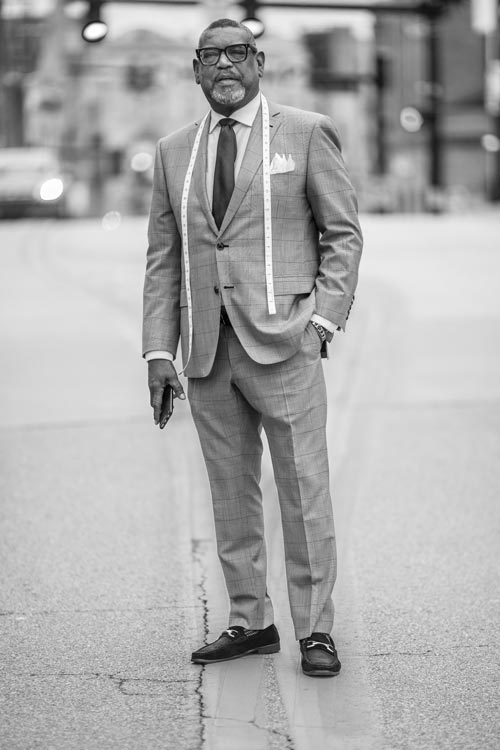 Then came the job at Style Gate, which lasted for a little while before he decided to open his own place on Wood Street, right next to the old Isaly’s.

Smooth was his nickname. “Because of my skin,” he says. “It’s a southern thing.” Smooth’N catered to the baseball players. Like Barry Bonds. He was a 40 long.

Eventually, he closed shop and went to Saks, where he wore a suit and tie every day, five days a week, for 18 years. Got health, dental, a 401(k) match, racked up a six-figure salary, and enjoyed three weeks of paid vacation a year.

When it closed, it was the clients he missed the most. Clients he’ll still meet anywhere, anytime.

“I work 24/7, baby,” he says. “This isn’t a ten to five gig.” Whenever the client is available, he’s available to them. “When they can take time out of their busy day for me, it’s an honor.”

The relationships he builds with his clients is paramount. People don’t exactly go opening doors for just anyone these days. You’ve got to have rapport. Be a good person. Treat others the way you want to be treated.

Ernest Baugh will never be late to an appointment or cancel one. If a problem arises with the suit you ordered, he’s going to tell you face-to-face. Not by phone. Not by email or text. And it doesn’t matter if you’re buying a $1,200 suit or a $15,000 one.

Everyone is going to get the same respect.

“I love going out and seeing my guys dressed to the nines,” he says. “When people ask, ‘Where did you get that?’ they say, ‘This is from my man Mr. Ernie.’”