It’s difficult enough for many couples to agree on a new home, but the challenges were even greater for Stephen and Helen Hanna Casey. He’s an award-winning architect and she’s the president and CEO of Howard Hanna Real Estate Services, the fourth largest real estate company in the U.S. “Steve knows architecture and design, and I know what a house is supposed to look like, so it’s not easy. And we’re both too opinionated,” Helen says with a laugh. 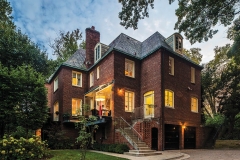 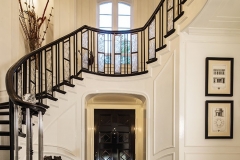 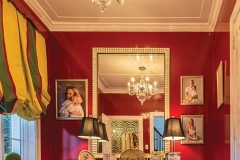 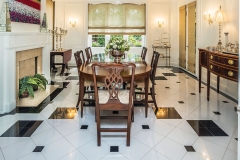 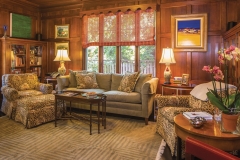 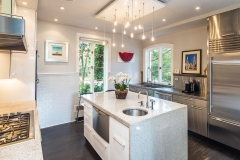 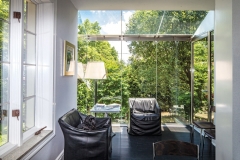 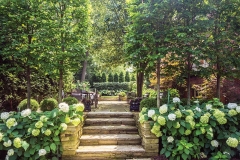 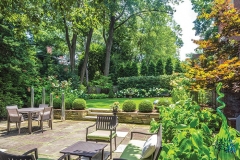 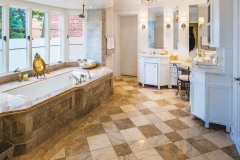 They did agree on several points. The new house was going to be a home, first and foremost. Not an investment they would renovate to sell, or a place to hold large receptions for agents. The residence they had just sold was all that and more—a stately mansion on one of the city’s premier streets in Shadyside. It was so big Helen remembers not knowing where her family was at times. Such grand houses are in short supply in Pittsburgh, so when an agent needed something to show an out-of-town client, the Caseys spontaneously offered their home. In two days it was sold.

The couple moved into a contemporary apartment on the river in the Strip District while they looked for a new home. “It was a glass box with hardly any stuff,” Steve remembers. The polar opposite of what they had left, in some ways it was liberating to experience a more minimal lifestyle. It enabled the couple to prioritize their needs as they searched for what would be the perfect middle ground.

“I say to people all the time nobody should downsize,” Helen says. “You should right-size for your lifestyle. To me a house is supposed to be what you need at the time.”

Their search focused on eight streets in the city, and they found a house they liked, but the owner wasn’t ready to sell. So the Caseys bought a plot of land in Fox Chapel, thinking they would build, but then the house they wanted came on the market. “It took my realtor at least six months to buy this house,” Steve jokes.

Designed in 1935 by Edward Lee, who was partners with Henry Hornbostel on the City County Building and who designed a number of residences in Squirrel Hill’s Murdoch Farms, the home was built for George Macbeth. He owned the Macbeth and Wilson Glass Co., which he sold to Corning Glass Works, but not before he had one of its subsidiaries, Steuben, manufacture the daffodil cast glass panels that adorn the bronze and iron banister in the entrance hall.

“I would only move if I could a find a house built in the ’20s or ’30s or a midcentury in the right block,” remembers Helen. “I love these houses that, in a way, were downsizing for a generation of people who had lived in huge houses and suddenly were able to have a different lifestyle without help. They were much more compact, but in many cases had interesting components to make them different and special.”

I say to people all the time nobody should downsize. You should right-size for your lifestyle. To me a house is supposed to be what you need at the time.
—Helen Hanna Casey

Steve set out to do some research in the archives at Carnegie Mellon and found that Lee’s estate had donated his entire office. The archives contained almost the complete set of plans for the house, which was ahead of its time in many ways.

“Though not ‘modern’ in the sense of Fallingwater, which was built about the same time, the house was up to date with the latest and the greatest including wall-to-wall carpeting everywhere but the kitchen and bathrooms,” says Steve. “The house has an early integral garage, taking advantage of the grade, which became a Pittsburgh standard. When I first saw the house, it was dark and cluttered, and I didn’t really sense the careful interlocking plan. When I looked at the drawings, I saw how beautifully it came together.”

Macbeth sold the house and moved to Corning, N.Y., to become vice president of Corning. The buyer was Thomas Johnson, a founding partner of what is now K&L Gates. In 1941, the Johnsons put on a two-story addition, with a mahogany library on the first floor. Not to be outdone, Steve designed another addition when the couple bought the house in 2003: his was a 4-foot-by-10-foot-wide glass box adjacent to the kitchen with a small terrace attached. The effect is at once harmonious and unexpected in an old house.

“The glass box sort of disappears so you float out over the back yard,” Steve says. “It’s neither traditional nor non-traditional. It was the spatial effect that was important.”

The Caseys gutted the kitchen down to the studs, removed a back staircase and added an elevator. They covered all of the floors with quarter-sawn white oak ebonized with a “painstaking” black finish. They redid the entrance foyer in black and white marble, with a circular pattern echoing the curved staircase. The bathrooms were completely renovated, with Helen’s, the former boudoir, the largest. The need to improve the insulation in the attic led to a decision to raise the master bedroom ceiling, replicating the coffered effect elsewhere in the house and using the same moldings to make it look original.

“We were used to a bigger space—we had 20-foot-high ceilings in the Strip,” says Steve. Adds Helen: “The beds got higher, too. I would lie in bed and say the ceiling isn’t high enough. You give up those high ceilings with an old house.”

The Caseys asked interior designer Kitty Hillman to step in after Steve had all the paneled walls, trim and ceilings painted in different shades of Donald Kaufmann gloss white. “We told Kitty to pretend it’s a clean slate and then we’ll figure out what we’re going to use,” Helen says. “She got what we wanted to achieve.”

Hillman planned the furniture layout and moved on to the fabrics, observing the Caseys’ wishes for a monochromatic scheme—a big change from the jewel tones of their former home. “Twelve years ago it was hard to find platinum,” Helen notes. “Now you can find it, but then it was unusual. That was the hardest challenge.”

The subtle use of color leads the eye out the many French doors and full-length windows into a formal garden designed as three outdoor rooms. Though the Caseys inherited the remnants of the original garden, they completely reimagined the space with abundant plantings and stone terraces that can accommodate different-sized groups for dining.

“I always wanted to live in a house where the front door looks out the back door, and this in a sense does. The light goes right through,” says Helen, who has been known to stick potted or even artificial flowers in the garden when nature doesn’t cooperate.

But in every season it seems to. The Caseys are as famous for their Christmas decorations in the winter as they are for their outdoor barbecues in the summer. The views are always magnificent in this secluded part of the city any time of year.

“We still like to entertain a lot, and this house is great for that,” says Helen. “We can’t put 120 people in it like the old house, but we can fit 75. Yet it’s still intimate enough for us to sit in our little library. You can be in our house and know where everyone else is!”