It all started after Charles Bowdish returned to his hometown of Brookville, Jefferson County, after a stint in the U.S. Army during World War I. Exposed to mustard gas during the war and left with respiratory illness, he commenced building a miniature railroad and village so finely detailed that it was an instant hit when revealed to his neighbors during the Christmas of 1919. 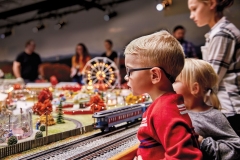 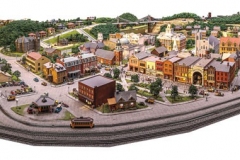 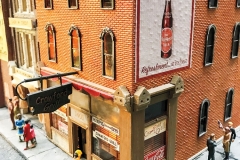 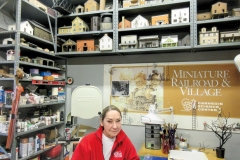 One hundred years later, his work lives on as the Miniature Railroad and Village at the Carnegie Science Center, a meticulously detailed blend of history and whimsy that has charmed children and adults alike for a century to become a Pittsburgh institution admired the world over.

This year, some 500,000 people are expected to visit what Atlas Obscura, an online travel guide for unusual destinations, rates as one of the top nine model railroads in the world.

For Bowdish, the railroad and village became a labor of love. It grew to occupy most of the second floor of his house. As word spread of the extraordinary detail and craftsmanship of Charlie Bowdish’s model village, the flow of visitors grew, many returning year after year to see what had been added.

After more than 30 years, he decided the exhibit had outgrown his house. He contacted Buhl Planetarium on Pittsburgh’s North Side and agreed to move “Charlie’s village” to the city. There, it was renamed the “Christmastown Railroad” and presented to the public in December 1954.

Nearly 24,000 people came to see it that year alone and a Pittsburgh Christmas tradition was born. When the planetarium moved its operations to the Carnegie Science Center in 1992, the railroad moved with it and today is open year-round, attracting hundreds of thousands of visitors.

Grew with the city

Generations of Pittsburghers remember their first glimpse, which was often experienced with parents on a holiday excursion or during a school field trip: the exhibit’s precise detail, the way it gradually transformed from daylight to nightfall and back every eight minutes, and the four seasons depicted in each quadrant of the imaginary land. With 105 animated figures and objects, including the trains with their haunting whistles, the village seemed to be alive. Visitors felt like giants peering down on the happy existence depicted before them. They recognized places they had visited in person, such as Isaly’s, Kennywood Park, Forbes Field, Fallingwater and the blockhouse at Fort Pitt.

Most of the familiar landmarks are still with us, but the city has changed. And the Miniature Railroad and Village has evolved to reflect the changes. Exhibit staff have added new features in each of the last five years. The Hill District’s legendary nightclub, the Crawford Grill, is one new addition. The Strip District’s famed Primanti Bros. diner, complete with a figurine of venerable manager Toni Haggerty inside, is another. The Westinghouse Atom Smasher in Forest Hills is now part of the landscape. A special centennial addition this year is Kaufmann’s and the Kaufmann’s clock.

“I think what sets this railroad apart is the attention to detail,” Curator Patty Everly said. “We do months and months of research before we make any addition to the display.”

When possible, Everly and her staff use materials that enhance the authenticity and significance of the display. For instance, the scale replica of the Hill District’s Ebenezer Baptist Church, where two Pittsburgh firefighters died while battling a fire in 2004, is made from a piece of charred wood from the church’s bell tower. Inside is a tiny time capsule, given by Mayor Bill Peduto, to commemorate the event.

The model of Forbes Field is another example. Tiny bricks in the outfield wall of the display are made from a real brick taken from the ballpark that closed in 1970. The display depicts action from the top of the second inning in the first game played at Forbes Field against the Chicago Cubs on June 30, 1909. The fans in the grandstand are formed by 23,000 hand-painted Q-tips.

A very recent addition features seven houses—six complete and one portrayed under construction—from an area of Donora known as Cement City, developed in 1916 by a company Thomas Edison formed. The inventor wanted to use the latest technology to produce affordable, comfortable houses built for the working class that were almost entirely of reinforced poured concrete. Also, the exhibit staff used new technology to build its replica using heated resin and 3D printing to reproduce the Cement City houses to scale from actual construction blueprints from the Donora Historical Society.

“Edison was trying to make home construction efficient on a mass-production scale, and that’s what new technology here allowed us to do and still get the level of detail we’re known for,” exhibit technician Andrew Spate said.

Earlier this year, Gail Lipchak, a teacher in the Avonworth school district, led a group of young students around the 2,490-square-foot exhibit, which she considers a teaching tool. “The kids are able to see things that for the most part don’t exist anymore,” she said. “Isaly’s. Forbes Field. Even the steel mills are mostly gone.”

A few feet away, several of her students watched the machinations of the replica of the old Sharon Steel Mill, sparking the imagination of 8-year-old Jack O’Neil, who said, “There’s a lot of detail. That crane probably weighs 30 tons.”

“I like all the things that have suspension bridges,” Alex Troxell, 8, said. “And I like the roller coaster because there is a lot of detail. It looks like they put in a lot of hard work.”

Lucas Erdeljac, 7, said the trains were his favorite. Ten-year-old Addison Kenawell, visiting from DuBois with her father, concurred. “I really like the trains. I always wanted to have a train set in my backyard.”

In addition to the staff, a corps of volunteers helps keep the trains running smoothly. Norm Diebold, a retired Allegheny County purchasing agent, has donated his time each Friday for the last ten years, greeting the public and sharing in their memories of growing up in western Pennsylvania. “I love working here,” he said. “I love historic buildings and homes and I love the stories behind them.”

David Weber is a former staff writer for the Boston Herald and Associated Press and currently lives in Regent Square.