A local effort is increasing the number of bee hives in the Pittsburgh area. Meadow Sweet Apiaries of Dormont produces a ton of honey a year from bee colonies in Squirrel Hill, Homestead, Sewickley and other neighborhoods.

On a brisk October morning, Dr. Bill Bookwalter dons a billowy, white beekeeping suit complete with veil and hikes up a hill behind his Fox Chapel home to harvest honey. Most days, you’ll find him in surgical scrubs, but during his downtime, Bookwalter, a neurosurgeon, practices apiculture: he maintains colonies of bees. 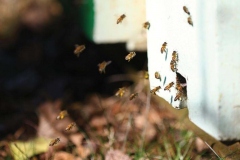 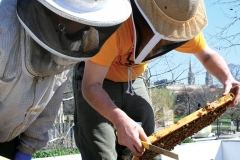 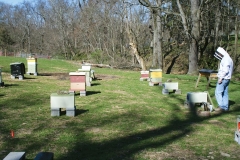 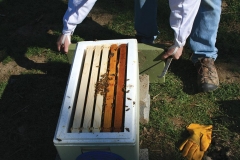 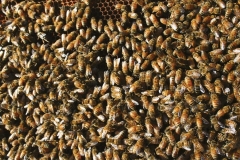 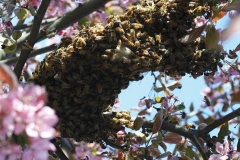 While the honey is a hit with colleagues and friends, it’s the science behind the sweet amber liquid—the highly evolved life of the hive—that intrigues him.

“I’m a biologist by nature, and these are biological systems I can play with,” says Bookwalter, who first explored beekeeping a decade ago and now farms honey on his property and on that of several neighbors. What began with a mail-ordered queen and three pounds of worker bees has evolved into a community of hives that annually yield 200 pounds of the syrupy elixir.

Twice a year, in spring and fall, friends and neighbors gather in the Bookwalters’ garage and kitchen to extract honey from combs and bottle it under the Private Drive label. Hot knives shear away the wax the bees have produced to seal their gooey treasure, which then is filtered through fine mesh. It is a sticky, labor-intensive process that Bill’s wife, Donna, turns into a party.

“Once we got into it, we realized it takes a village,” says Donna, who gives away the bounty or donates it to charities. Besides honey, she makes hand cream from the beeswax, and that, too, has generated buzz. The Private Drive venture has put the Bookwalters in touch with a new breed of farmer.

In fact, southwestern Pennsylvania has one of the greatest densities of beekeepers in the state, comprising about one-quarter of the 4,200 registered apiarists who keep a total of 35,000 hives, according to Steve Repasky, a master beekeeper and president of Burgh Bees, an organization that provides mentoring for aspiring apiarists.

About 85 percent are hobbyists and their numbers have blossomed since 2006, when a mysterious phenomenon known as colony collapse disorder began wiping out hives by destroying worker bees and leaving queens stranded. Now blamed on a constellation of culprits, including pests, pesticides, pathogens, and poor nutrition, colony decline is a major threat that has claimed 44 percent of hives nationwide, says Repasky, whose company, Meadow Sweet Apiaries, produces a ton of honey a year from colonies in Squirrel Hill, Homestead, Sewickley and other neighborhoods, including Dormont, where Repasky lives.

“People were becoming more aware that ‘Oh, my God, bees are dying,’ and they wanted to help,” says Repasky, of the surge in backyard beekeeping. Since honeybees pollinate 80 percent of the fruits and vegetables we eat—one out of every three bites of food—people feel they are performing a vital service by keeping hives, says Repasky, who notes that, in the process, they also find their gardens becoming healthier and more bountiful.

Retired civil engineer Bob Tatro started keeping bees four years ago because the vegetable crops at his Oakdale home were puny from poor pollination. “My zucchini would start, but then shrivel up and die,” he says. “Everything’s looking a lot better now.”

“People feel they are performing a vital service by keeping hives… in the process, they also find their gardens becoming healthier and more bountiful.”
—Steve Repasky, president, Burgh Bees

Because bees will travel up to three miles to forage—making use of even lowly plants such as invasive Japanese knotweed— urbanites with little to no green space also can keep hives. Jana Thompson of the North Side maintains an apiary on the roof of her Mexican War Streets home, which she accesses by climbing out of a window. Her 20-foot-wide garden is home to four hives, but her bees gather nectar for their honey-making elsewhere. “I hardly ever see my own bees,” says Thompson, a part-time construction worker and dog trainer. “I mean, you don’t think in terms of individual bees; you think in terms of a colony—a superorganism that weighs about 10 pounds. My yard doesn’t have enough pollen to feed a 10-pound animal, but bees will go super far to find what they need.”

Kevin Hermann, executive chef of The Porch at Schenley in Oakland, maintains hives and an organic garden of pollinator plants on the restaurant’s roof. “I want to touch every corner of the food chain, and I’m helping the bees,” says Hermann, who partners with Repasky on the project. “We’re doing it for the whole shebang.”

Burgh Bees has even created a sweet spot for apartment dwellers and folks who don’t want to live with bees at its community apiary and pollinator meadow in Homewood, where hive space rents for $75 a year.

It’s where Lynnetta Miller of Friendship found her unexpected passion six years ago. “I took a class at Burgh Bees as part of a New Year’s resolution to try something new,” recalls Miller, who works as assistant to the director of the Robotics Institute at Carnegie Mellon University. “I’d always thought of beekeeping as something old, male farmers did. I didn’t know if I would like it or not.”

Within two years, she was apprenticing to Repasky and mentoring others. On a warm day last spring, she used a swarm of bees that had landed on a cherry tree in the Homewood meadow as a teachable moment for new keepers.

Swarms are a common occurrence in spring when bees, engorged with honey, split from over-crowded hives to establish new colonies, Miller says. “The queen needs a bigger space to develop more worker bees, so she’ll leave with half the hive. Some bees will have gone out ahead to scout a new spot, which could take anywhere from a few hours to a few days. It’s the colony’s way of reproducing.”

The sight of thousands of bees swirling in a cloud-like formation can be alarming, but swarms are typically docile, Miller says. “They’re just hanging out until they find a new home. They aren’t aggressive, because at this point they have nothing to defend.”

The eusocial structure of the hive is the most sophisticated in the insect world, requiring a queen for reproduction, thousands of female worker bees tasked with grooming a new queen, defending the hive, and keeping the colony fed, and a few hundred male drones whose sole job is to mate with queens from other hives.

“How a group of 60,000 organisms can make decisions and carry out those decisions together, cooperatively, is fascinating,” Miller says.

Worker bees select the queen, rear her in a special cell, and feed her protein-rich royal jelly—the bee equivalent of mother’s milk—to hasten her sexual maturity.

To prevent in-breeding, the virgin queen travels to mate with up to 40 males in a drone congregation area—a kind of singles bar for bees—and then stores up to six-million sperm that she selectively will release for the next two to three years.

Because she lays eggs at the rate of 2,000 a day or one every 20 seconds, the population in the hive builds rapidly as days lengthen and air temperatures warm in spring. Eggs hatch in about three weeks and the larvae are tended by nurse bees.

To prevent swarming from a managed colony, keepers will add new boxes for brood and, above them, new frames on which bees can build more honeycombs.

Considered architectural wonders of the insect world, combs consist of thousands of uniformly sized, hexagonal cells that attest to the bees’ remarkable efficiency. The hexagon is one of the strongest shapes in nature, and they are constructed in the hive with no wasted space, says Repasky. “They form a super structure.”

Although hives function all year, spring is when they and the people who keep them become most active. Apiarists inspect hives to see how they fared over winter—a season in which bees remain in their colony and concentrate on caring for the queen. They keep the hive warm by constantly fluttering their wings and shivering. The queen is always at the center of the cluster, but worker bees rotate from the inside of the huddle, where temperatures can reach 80 degrees, to the outside edge, which can dip to 46 degrees, to ensure that none of them gets too cold. To keep up their energy, bees feed on their own honey, having stored as many as 30 pounds in fall for the winter ahead. If they are low on sustenance, the keeper will provide sugar bricks until bees can begin foraging on whichever wildflowers, herbs, and trees first become available in the landscape.

Bees suck nectar from blossoms, and store it in their honey stomach. When they have a full load, they return to the hive and deliver their cargo to indoor bees that pass it mouthto- mouth, adding enzymes and reducing its moisture content until the nectar converts to food. It is then stored and capped with wax.

The nectar that bees feed on determines the type of honey they produce, from pale and delicate in spring when dandelions are in bloom, to dark and robust in fall when goldenrod and sedum flower. Flavors range from grassy to floral to musky, Repasky says.

Because Meadow Sweet is a full-service operation, Repasky is busy in spring distributing hives, using a Fox Chapel sheep farm as a pick-up point. In April, he sold more than 350 nucleus, or starter, colonies—each containing 10,000 European honeybees and a queen—to local hobbyists.

Repasky typically marks the queen—identifiable by her large thorax—by plucking her from the hive and dabbing her with colored ink.

The number of folks purchasing “nuc” boxes has doubled in the past three years, Repasky says.

Father and son Tom and Matt Fleury of Murrysville picked up nucs for their Northpoint, Indiana County, farm. “It’s a new experience for us,” says Tom. “We have 63 acres we’d like to pollinate and we’d like to generate honey for the family to enjoy.”

Donna McCullough of New Wilmington waited in line to pick up a “nuc” box for her daughter-in-law. “We’re not honey people,” McCullough says. “We do it mostly to pollinate the garden, and to help the bees.”

Some enthusiasts, though, want nothing more from bees than to revel in their transcendent orbit. “They’re spiritual to me— that’s everything,” says Taylor Call, whose husband Jeff Shaw is apiarist for the Burgh Bees Homewood project. The couple keeps two dozen hives on the 50-acre organic, vegan farm where they live.

“Their buzzing is healing,” says Call. “If we could all live like bees, working peacefully and cooperatively, we’d have a better planet.”

The Mysteries of Feral Bees