Jen Montgomery, one of the four new owners of Blackberry Meadows Farm, collects tomatoes from the greenhouse.

Selected by owners Jack and Dale Duff from a small field of candidates, they have been operating the venerable Blackberry Meadows Farm all summer under a lease/purchase agreement. 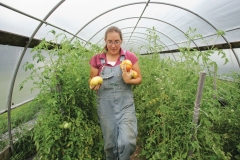 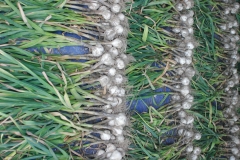 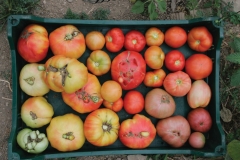 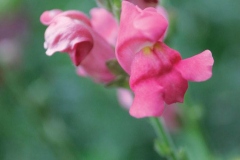 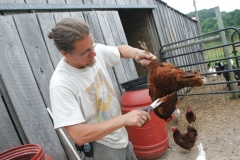 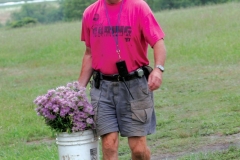 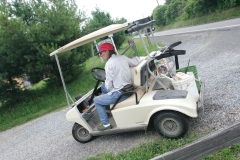 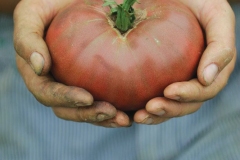 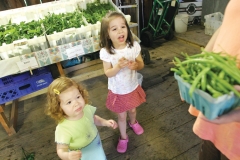 With heads full of “green” theory and their own, seemingly endless renewable energy, the four entrepreneurs have passed the halfway mark in the growing season and are feeling buoyant. They are staking their futures on the notion that sustainability can sustain them. So far their business plan is working.

On Oct. 31, they expect to sign a document giving them title to the farm. That transaction will gratify the Duffs. The couple, both 60, had deferred their Montana retirement until they could feel reasonably sure that the effort they’d put soul and sinew into for so many years would prosper in the same rigorously organic model. The farm’s Community Supported Agriculture program (CSA), a veggies-by-subscription program, is the oldest organic one in Western Pennsylvania. The agreement hinged on Blackberry’s 100-plus customers continuing to receive their weekly boxes of fresh produce.

We are sitting on the porch of the Duffs’ Belgian-block ranch house. Beyond the veranda and its close-pressing oaks, are 85 acres. Jack Duff, a trim, tanned ex-corporate banker, and Dale, a Hepburn-limber communications professional, abandoned suburban life in Mt. Lebanon to come here in 1988.

“The place was untended, strangling in brambles,” Jack says. “We named it Blackberry Meadows and set to clearing it. Just the two of us with a small tractor.”

“Last spring, we realized we were nearing the end of our physical endurance for this. Urban Homesteaders was the best candidate. We said let’s get together and do a sales agreement. That turned out to be a lease/sale agreement.

“They will receive all the cash from the wholesale (East End Co-op), the CSA and the farm markets. When the sales agreement kicks in Oct. 31, we apply the lease payments to the mortgage. For this season they will do 100 percent of the farm operations. Dale and I will work for them whenever and wherever we can.”

“I’m always the dirtiest one,” says Jen Montgomery in her muddy overalls. She is the farm manager, calm, nearly deadpan. Grins are almost surprised out of her and thus twice as rewarding.

The four partners sprang from the same academic cradle. Jen, Greg and Heath have ’04 graduate degrees from Slippery Rock’s unusual and entrepreneurial Masters of Science in Sustainable Systems. Dave has an undergrad degree and computer tech experience. Only Jen is accustomed to backbreaking fieldwork.

Greg and Jen met in grad school and married this past year. Two years ago, the group founded nonprofit Urban Homesteaders, LLC, to “help enterprises and individuals increase the sustainability of their homes and communities.”

Jen has farmed on three continents. She can discuss permaculture in New Zealand and can “build a stone wall, cook on a wood stove and herd sheep,” thanks to a mid-winter stay on a Scottish Highlands farm.

She managed a CSA in Harper’s Ferry, and at Slippery Rock directed the school’s farm and farm market. The question in her mind was: “How am I going to make a living farming?”

She sweated with organic bluebloods in Pittsburgh: Don Kretschmann, operator of one of the largest organic CSAs in the country, and Mindy Schwartz of Garden Dreams. Mindy farms Wilkinsburg vacant lots and is a partner in the big-thinking foundation, Grow Pittsburgh, that spearheads many urban agriculture projects.

At Blackberry Meadows, Jen and Dave are sponging lore from the Duffs. “They are leading from behind,” Jen said. “Dale teaches me how to start seeds, quantities to aim for and how to keep things in production. On everything she uses row covers—fabric that lets in sun and water, but keeps bugs off the broccoli. It’s a pain, but just essential. Jack’s teaching me QuickBooks.”

Greg’s brother Dave, the techie: “We have a notebook. It’s like going to school. Every day. They know the best seeds, best companies. Like ‘plant this now, ’cause it won’t bolt.’ Well, we planted other things and they bolted. Jack tells me what gear to put the tractor in. They are saving us a big learning curve.”

“We wouldn’t be here if Greg hadn’t written the business plan,” says Jen. “I’m content to be on the farm. Greg’s in the city making connections.”

While Jen camps out in the Duffs’ basement, Greg works from the couple’s South Side apartment. It is no ordinary apartment. He and Jen are no ordinary tenants. They receive a break on rent, having submitted the winning resume to become resident caretakers of the award-winning building’s Frank Gehry-like roof greenhouse and garden. Their landlord is Ernie Sota, 57, Pittsburgh’s prolific green builder and sustainability pioneer.

Sota’s renovation of his building won AIA honors for design and “greenness.” His Windom Hill townhouses on the South Side Slopes were featured in the New York Times. His more affordable Riverside Mews condos in the South Side Flats, featured on WTAE-TV, appear on You Tube.

“Ernie is part of that post-Carter wave of green,” Greg says. “People were on a high, thinking they would make a difference. These people are still there.”

“There were fewer of us in that first wave,” Sota says. “Jen and Greg represent people who believe in what they are doing and have figured out how to get the resources to make it happen. They benefit from a sustainability-based education and experience with businesses that have developed, practicing these principles. They are bright, creative, motivated– and have a great sense of humor. They are riding a wave and working hard.”

Greg’s computer is elevated so he can work standing. He paces the apartment with his cell phone. His hair slicked back into a stub of a ponytail, he’s at ease with people and a colorful and articulate explainer.

Greg brokers deals between makers and users of biofuels. He and partner Nathaniel Danyo founded Steel City Biofuels in 2006. They have contracts with Pennsylvania Resources Council, one of the state’s oldest “green” organizations, and the projects involve helping Giant Eagle transition its fleet to biofuel and Eat’n Park to recycle restaurant grease into biofuel destined for use by nonprofits.

He feeds and waters Urban Homesteaders’ various projects, too. One helps suburbanites toward a more sustainable lifestyle— “things they badly want to do, like reduce their electricity bills 20 percent with minimal investment.”

Partner Heath Gamaché is a renewable energy specialist whose family has retained its French Canadian accent mark for five generations. His master’s thesis on wind energy is the main reason Slippery Rock has a wind turbine on campus.

He’s up to his eyeballs in collaboration now. He has concluded a job at Lutherlyn, a Lutheran outdoor ministry camp and conference center, where he is assistant director for environmental education. He is now focusing on the farm.

In June, along with seven partners, he launched Appalachian Lighting Systems. The Elwood City firm “makes municipal streetlights, using LED [light emitting diode] technology, that last 35 to 40 years compared with a conventional bulb’s life of three to five years, The LED lights use 80 percent less electricity. LED streetlights are used in 50 European cities. Elwood City is testing ours, applying for grant funding to install more. We have another large deal in the works. Our product offers an advantage: They can be plugged into existing poles and are easier to maintain than most.”

One partner in ALS is Urban Homesteaders. “We have a lot of fingers in a lot of pies. Urban Homesteaders will spin off a bunch of green-idea companies with area professionals. It will retain a small percentage, giving people a leg up at the beginning, encouraging their vision, following them down the road. We have lots of baskets, and we hope the eggs come later.”

Meanwhile, the gang of four has a secret weapon. “It hurt more at the beginning,” Greg’s mom, Barb Boulos, admits. “My body’s getting used to it.” She and Greg’s dad, Ted, retired schoolteachers who live in Wexford, put in three days a week at the farm. The pits for Barb is weeding; tops is staffing CSA pickup day when 100 people come to the barn for their goodies.

The Bouloses envision a move to the farm, leasing its ranch house to be near their kids and supply a financial cushion during the transition, when the Duffs move to Montana.

Jen’s parents, retired national park specialists in the historic preservation of museum objects and longtime gardeners, also get to the farm from their Edinboro home as often as they can.

The long and short of it: These four entrepreneurs aren’t concerned, for now, if they make money. They have no school debt. “We are great at living on a shoestring,” said Greg, and Heath added: “I’ll bet we collectively made less than $10,000 each this past year.” Each in his or her own way would rather save the planet.

Heath, whose father is a retired minister, said, “Caring for the earth is a real spiritual pursuit, the most significant part of faith for me. In years of environmental educating, my main motivation has been stewardship. Everything that meets everything’s needs. Caring for the earth is caring for myself and my neighbor.

“If I can get a town to replace its streetlights — and can calculate that reduction in carbon dioxide emissions, acid rain, asthma-causing particles — while the town saves a lot of money for human service-type things, isn’t that a pretty pragmatic kind of idealism?”

Jen would be gratified “if we can get people to be a little more self-sufficient.”

Asked what he would do in his most hedonistic moment, Greg struggles, then laughs: “I like pretzels. I don’t drink much. Eating pretzels and drinking a glass of water? I know: a walk with Jen on the farm. A walk with Jen at the farm is an indulgence that happens with amazing rarity.”

His outlook on the group’s venture: “We absolutely will not starve. Bumps in the road? We’ll innovate our way out of anything.”

Virginia writes for newspapers and magazines about food. She translated the cookbooks of French pastry chef Christine Ferber, made popular in this country by Martha Stewart. She is active with Slow Food, an international organization working through agro-ecology for a better food supply and to restore the ceremony of the table. She was founding editor of Mt. Lebanon Magazine.