The Basement of Precision

The fork brace will steady the custom-built 1973 FXE that’s currently in progress. Right now, it’s sitting on a lift in the garage that sits in the alley behind Jeff’s house, sandwiched between single rows of towering red T&E tool chests and a ’75 Camaro waiting patiently for plates and insurance.

That unsteadiness is what Jeff calls “flop.” Turn the front end and that ’73 FXE sways just enough from side to side to be noticeable. To him, at least. Most people, if they even noticed it, would shrug it off.

Jeff is machining the brace from a piece of 6061T651 aircraft aluminum that just happened to be lying around in the subterranean kingdom that sits under his North Side house. There, a threading lathe, armature lathe, rotary table, belt sander, band saw, sandblasting cabinet, two bench grinders, arbor press, wire wheel machine, three drill presses, Edelbrock small block engine, and another custom Harley – a panhead on a softail frame he’s building – hold court in a basement more immaculately organized that most people’s living quarters. From the rafters above hang an array of treasures collected over the past five decades: metal spray guns, his hand-painted vintage Harley tanks, a scythe. 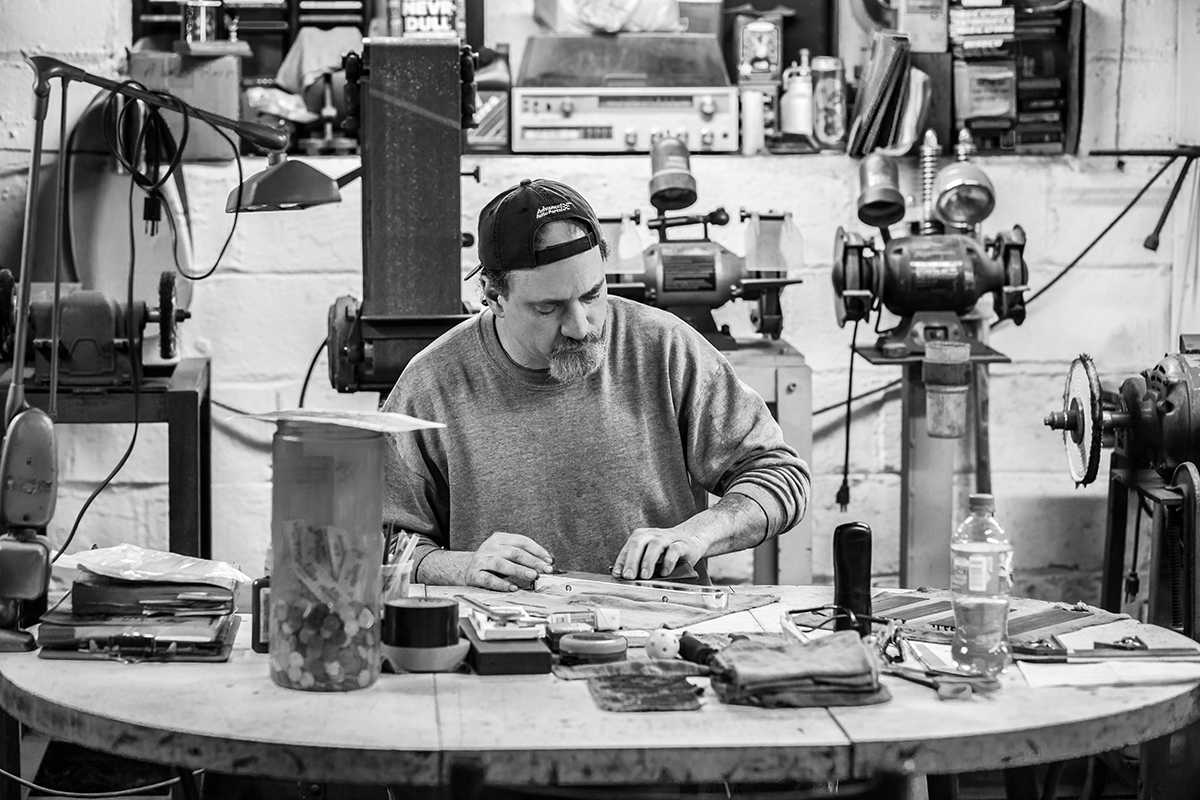 The concrete floor has been swept completely clean of all debris. When the fluorescent lights are on, so is ‘DVE – playing from an old, black boom box that sits atop a grey filing cabinet covered in stickers:

Jeff will spend four, five, maybe six hours meticulously fabricating that brace by hand – boring, milling, sanding, polishing – a part that he could have easily bought for $250 out of a J&P Cycle catalogue within reach. “It doesn’t matter how long I spent doing it, because I did it,” he explains, brushing Dykem steel blue layout fluid in precise, equal strokes across the aluminum with the thoughtful intention of Claude Monet.

The Dykem dries relatively quickly. When it does, Jeff meticulously scribes another set of equally spaced lines with a metal compass. He does this while sitting at a yellowing oval Formica table flecked with gold. Years ago, it occupied his mother’s kitchen upstairs. Now the surface is scarred with cigarette burns, nicks, fading penciled messages, and circular scars from something he fabricated years ago – he can’t remember what.

He’s wearing his signature uniform: faded black Champion hat worn backwards, gray sweatshirt, one knife clipped to each side pocket of well-worn Levi’s he cuffs with half a roll. A master link hangs from the left side of his heavy, black riding boot. He’s been doing that for, hell, 25 years now. Had a link break once on the chain of his Harley and found himself stranded in the middle of nowhere. Never again. 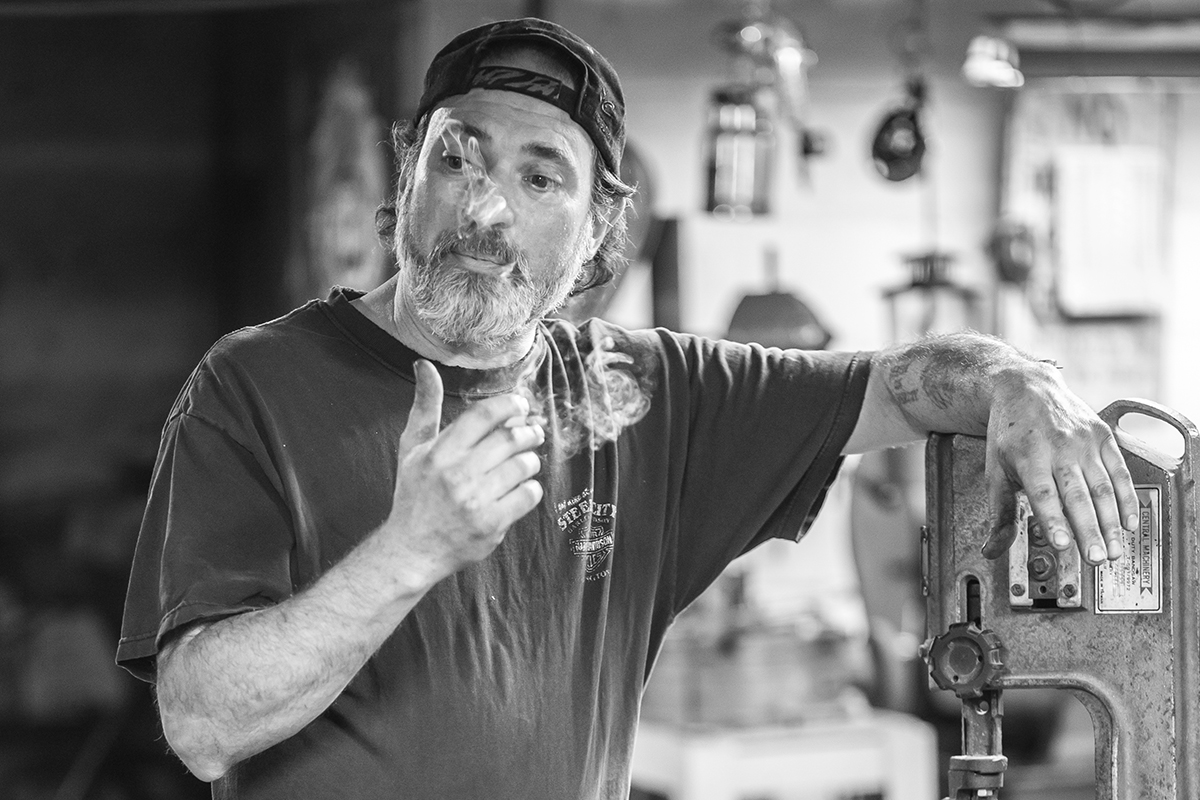 Everything currently occupying the Formica table has a purpose, arranged with surgical precision. The tools he will use – compass, scribe, Dykem, small piece of sandpaper – have been carefully laid out on a faded red shop rag folded into a perfect square. Next to which is a blueprint with the heading ALUMINUM FORK BRACE written in immaculate penmanship. Underneath, it reads:

This wouldn’t make an ounce of sense to most people. But it does to Jeff. This is his second language. One he speaks with effortless, beautiful fluency.

Painting the Dykem is one in a series of steps – saw the material into a rectangle, mill it square, scribe the layout lines, center punch the layout lines, drill, tap and counter bore two holes, bore through the two holes at an inch and 5/8th’s, saw the piece into half and mill it flat, round the corners, sand, polish, sand again, polish to a finish – that will turn the piece of 6061T651 aircraft aluminum into something purposeful.

Spend two hundred and fifty bucks on some mass-produced brace that you order out of a J&P catalogue? To hell with that.

The white analog alarm clock hanging next to two vintage motorcycle plates reads 10:45 pm. He knows damn well he’s got about four, five, or even six hours left before the brace is finished. And when he does, he’ll pick it up, decide it’s not finished after all, continue buffing out pits and grooves and nicks his eyes see that no others can, completely engrossed in what he’s doing, sitting in the subterranean kingdom he’s reigned over for 53 years.