Anne and the Album

She could sit here all day, really. On the upholstered, wooden chair without wheels that she’ll push from keyboard to keyboard while she’s creating songs in the studio she has set up in her living room. 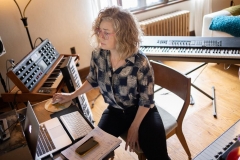 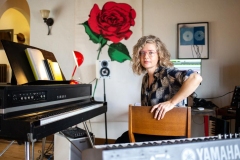 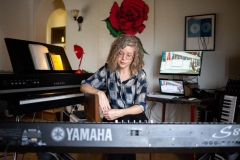 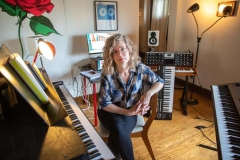 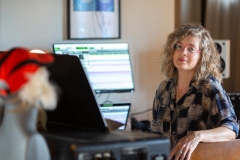 It’s a sunken space with hardwood floors and a wood beam ceiling, anchored by a stone fireplace that feels very cozy and Hansel and Gretel-ish. There are six keyboards in all, including the Yamaha S80, the Roland 500PPO, and the Yamaha electrified piano; the one where a yellow copy of “The Unemployed Philosopher’s Guild Music Notebook for the Learner” sits, a piano that looks like a baby grand and kinda sounds like a baby grand until she plugs it in and starts to wail on it.

“It’s a touring piano made in the ‘70s and ‘80s,” Anne says. “Phil Collins used a model like it. Prince had one in his grandma’s house. It’s like two instruments in one.”

But the mixing? Blending all the tracks she’s written, produced, performed on and recorded? “I can’t do that all day. My ears get tired. I have to take a break after a while.”

This is her first full-length album. There have been singles, collaborations and an EP. But never an entire, full length album. While vacationing 930 miles north in Quebec’s Fjord-du-Saguenay, she came up with the title: Quartz.

“It goes along with the pseudonym,” she explains. Anne likes to create under the name Rose Winston. Rose was her grandmother’s favorite flower, and Winston because as a kid, she would transpose George Winston songs. “It’s what my parents listened to.”

She’s recorded the entire album here, in her home studio. All nine tracks and their electronic/alternative/chillwave/synth pop vibe. Recorded some of the lyrics in the hallway to get just the right reverberation. Switched from keyboard to keyboard to come up with the sound she wanted, recording into the audio interface, and saying thanks, but no thanks when friends would text and ask her to hang out. She’s been going at it for about six months, with eight tracks left to mix and a few weeks to go before Quartz is done.

When it is, she’ll post it on her website, rosewinston.com, and streaming platforms like iTunes and Amazon and Spotify—“Spotify pays like, point zero, zero, zero one percent per play,”—or, Bandcamp, a website where musicians sell songs to fans for anywhere from name-your-price to eight to twelve bucks an album.

When Anne was four, she started taking piano lessons. Pretty soon, she was playing the teacher parts that were always in the back of the book for songs you’d sing along to like “Zippity Doo Dah.” Right now, she’s into ‘80s music and Bossa Nova. And she doesn’t have to be living in a straw hut in the middle of nowhere to be inspired. “It’s still me, wherever I am,” she says, and no, she’s not Taylor Swift: you can date her and your behavior—good, bad, or otherwise—won’t end up as a lyric in her next song. “The experiences might be in the music, but generally it’s more abstract. Music is a powerful bridge that connects me to myself and other people.”

And she won’t sit there at her computer, obsessively refreshing the screen to see how many albums she’s sold or how many people have downloaded her songs once Quartz is posted online, because most likely, she’ll just forget about it.

“Once that is done, there’s more to do,” she says. “The next album, performing live, doing other things… like, actually seeing my friends.”