An Antique Point of View

Someday, Jim Barricella will retire from antiquing. Well, maybe not retire literally, but definitely do something else with his life. Something other than the never-ending hours he spends at his antique shop, Off the Avenue. 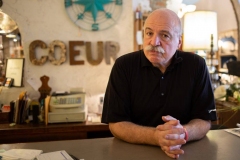 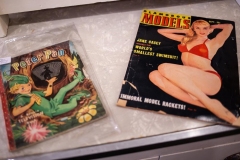 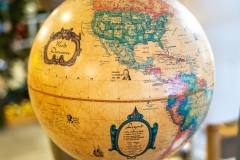 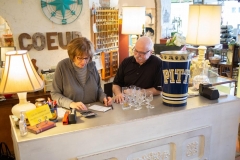 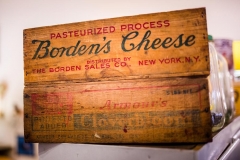 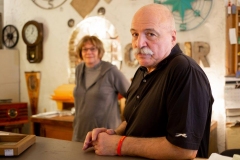 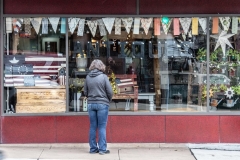 If someone bought the place, Jim would set up a booth and stick some antiques in there. No worry. None of this 24-7 stuff you deal with when you own the place. Instead, he’d just fill a booth. Wait until something sells. Enjoy a big fat check at the end of the month.

The business has just changed so much over the years. Everyone used to love all the old furniture. Now, it never sells. Not unless it’s painted. Young people love an antique that’s been brushed with something like chalk paint. They go crazy over the stuff.

“If you love original wood, it’s changed for the worse,” he says. “But it’s the young people who are driving the market. And they like painted furniture.”

When Jim first opened the shop in Coraopolis, it was… maybe ’03. At the time he was collecting paychecks from USAir. First as a part-time gate agent. Then, a special assistance rep. Then he got into flight attendant crew scheduling. Then, pilot scheduling. The last position he held was something they called “Claims.”

“If a flight attendant had an unusual trip, they’d get a pay increase,” he says. Snow. Rain. Hurricanes. Acts of God that would leave a crew stranded, placing a frantic call to Jim’s phone.

After 9-11 he took a voluntary furlough with USAir. Started remodeling the house he shared with his husband, Mark Grady. Jim thought a lot about the airline business. Figured it might be a good idea to start his own thing, just in case the airline business tanked.

So, he opened a little shop around the corner on Mill Street in Coraopolis. Two years later, he and Mark carried everything down here to the old Cahen’s store. His first vendor was Evie Reynolds.

“We’ve been friends forever,” he says.

Eventually, Jim went back to USAir, working full time for the airline and then just the same for Off the Avenue. Until 2007, when his older brother passed. A few months later, Jim made a decision: I want to do what I want to do.

USAir called it a “retirement,” and gave him a pass to fly free for life.

After awhile, a customer comes to the counter, balancing a toddler in her arms and wearing a hard, plastic walking cast on her right foot. She’s interested in eight drinking glasses. “It’s marked as Waterford, but it’s not. There’s a Pfaltzgraff stamp on the bottom,” she says.

And there’s no way she’s paying $15.95 for each glass. No way. I mean, maybe if it were Waterford, but it’s not. It’s Pfaltzgraff.

Evie picks up the phone. Gets Michael’s number from a laminated sheet that lists all the other vendor’s phone numbers.

“You have eight glasses marked as Waterford, but they’re not,” she tells him. “It’s Pfaltzgraff. Okay… yeah. No, I think she’ll go for that. Okay, I’ll tell her.”

“Twenty dollars for all of them,” Evie says.

“I never would have thought he’d go that low,” Evie says.