It’s 10:30 on a Saturday morning, there are already four guys waiting in line for a haircut, and no one knows where Tony is. 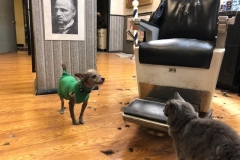 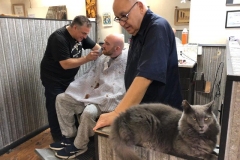 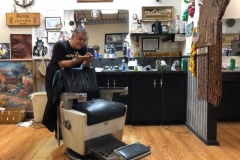 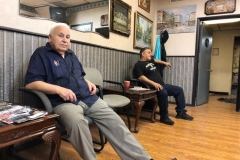 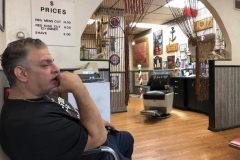 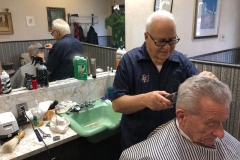 “He’s not here?” Dante Folino Gallo asks, holding the door open for his father, Salvatore, who uses a walker to shuffle past a towering, 40-year-old Schefflera plant, a millennial buried in his iPhone, and a guy who’s been methodically counting his thin billfold for the past 10 minutes.

“You call Tony, see if he answer you,” Mr. Perri calls out, Italian accent thick. He drapes a striped cape over his customer as Chi Chi the cat perches on the partition, the baby powder scent of Pinaud aftershave wafting through the air. “He no answer me.”

“This is a little too early for Tony,” Dante says, depositing his father into an empty barber chair.

Antonio Perri came to America in 1961 when he was 24. “Boat. Ten days. Seventh day, I throw up.” He spoke no English. Came here because everyone wanted to come here. Made his way to Sewickley, where his aunt was living. He had been cutting hair in Italy since 1946, which appealed to the owner of Bruno’s Barbershop in Ambridge. After a year, he took a test to get his own license.

“Okay,” Mr. Perri says, retrieving shears from the edge of a sink the color of imported jade, into which water from the faucet drips relentlessly. “What you want today?”

“Make it real short, like this. But don’t cut over here,” his customer motions over the top of his head. “Can you do that? And in the middle, shape it up a little but still keep it high.”

When his son finally arrives, it’s through the back door with his dog. “Shaddup!” he yells, shushing a Chinese Crested named Gino, who wears two gold chains around his neck and the remnants of someone’s shirt on the rest. “His winter wear,” Tony explains. “I make them out of sleeves and sew the leg parts on. Otherwise, he’ll freeze his hairless ass off.”

“Il mio telefono è morto!” Tony shouts back, throwing his hands up. He rolls his eyes, plugging his busted Samsonite into a small set of portable speakers and opens a playlist titled “80sand70sMemories” that kicks off with Cornelius Brothers & Sister Rose.

“Well,” Tony says, picking up a comb as Dante settles into his chair. “End of the Steeler season, huh?”

Tony’s cutting station is an altar to sentimentality and staples; religious figurines, a ticket stub to a 2009 Pens vs. Canadians game, a photo of Pope John Paul II, a Terrible Towel, cans of Barbasol, electric shears, Barbicide, and two clocks, one of which works.

“Yeah?” Tony replies, shaking his head as he continues cutting.

Whoever they’re gossiping about has no idea and blinks innocently. As another customer pays his tab, two more arrive and take seats under a wood burning of The Last Supper, next to which hangs a price board:

“I’ve been coming here for five years,” Bill Oplinger says, Starbucks still in hand. “I was driving by one day and thought, I’ve got to try it one time. It was one of the best haircuts I’ve ever had. I paid $100 for a haircut when I was living in New York and it wasn’t nearly as good. Plus, the atmosphere here? There’s nothing that even comes close.”

“An-tho-nee!” Mr. Perri calls out as the back door swings open and Tony’s 25-year old son appears. “Come in here. Know why everyone is Tony?” he asks the room. “They put a tag on you when you come over that say, ‘To NY.’ So, everyone Tony.”