The height of city living

Designer Rachel Farley emphasized texture rather than pattern in the living room of this Downtown condo so as not to compete with the extraordinary views, including one of PNC Park. A steel channel is cut into the wall on three sides for the gas fireplaces, with hidden cabinetry above and below. The sofas are B&B Italia and the coffee tables were designed by Farley.

The sleek new Fairmont Pittsburgh is a glamorous addition to the Downtown scene. Movie stars including Tom Cruise and Harrison Ford have made it the go-to hotel for those seeking luxury, privacy and service. But even more exclusive are The Residences located on the top 10 floors of Three PNC Plaza, which adjoins the hotel. Condominiums with views on three sides of the glass tower combined with all the amenities of the hotel offer the ultimate in city living. One of them belongs to a longtime client of interior designer Rachel Farley, who has done eight projects in Pittsburgh and New York for the woman who is also her close friend. 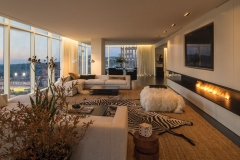 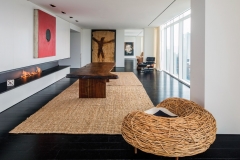 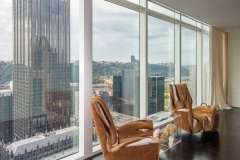 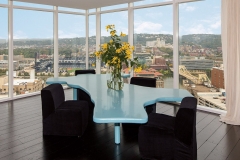 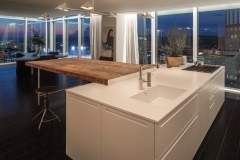 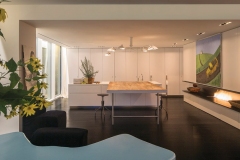 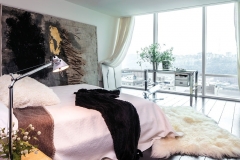 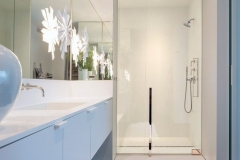 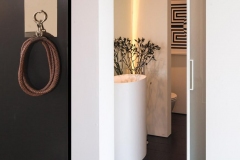 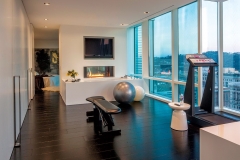 Though the client and her husband had a beautiful home on Mount Washington, she was looking ahead toward their retirement years and wanted to live on one floor. Her husband was adamant about one thing—he wouldn’t move unless they could find a better view than the one they had.

The condos had just come on the market when Farley and the owner stopped in to see them. “She said, ‘This is it, my husband will love it,’ ” recalls Farley. And so he did. The couple bought the entire floor, which was completely raw space but had breathtaking vistas as far as the eye could see. Though the condo came with a choice of finishing options and a standard room layout, Farley and the owner rejected everything for their own ideas of how the space should be treated. They set out to create a minimal, sophisticated environment that could function on many levels, not the least of which was as a showcase for the client’s extensive art collection.

The original plan called for bedrooms to be built along the exterior walls “so you had to go into the rooms to see the views,” recalls Farley. “I wanted it to be panoramic.” There was also a mechanical room in the center of the space—it ran from the roof to the ground and could not be moved. “I decided to have that be the axis of the apartment, so we built a bigger room around the mechanical room and that became what we call the core room.”

Lizzie Bennett Farley of the mother-daughter duo Bennett Farley Design handled the architectural component of the project while Farley concentrated on the concept and interior design. Their first step was to solve the practical aspects of living with an open floor plan—storage and utility space. The core room was their clever solution. A laundry room, caterer’s kitchen with an extra refrigerator, pantry and a closet that serves as the electric control room for the high-tech lighting and sound system are all housed inside the giant cube that anchors the condo.

The outside of the core room serves variable purposes. Covered primarily with cabinetry that is nearly invisible, it holds china in the kitchen, movies for the giant television in the living room, and file drawers and all the equipment for a complete home office in the large area that doubles as a gathering and buffet spot for parties.

To break up what would appear to be blank walls around the core room, Farley cut a continuous steel channel into the lower portion of the cabinetry that contains linear gas fireplaces on three sides. The steel was powder-coated in black to echo the black-stained antique oak barnwood floors. In a perfect example of form following function, the handles for the cabinets above and below the channel read as a small rim around it, disappearing into the steel darkness.

Because the three-bedroom, three-bath condominium had low ceilings, Farley “used every trick I had to keep those ceilings up as high as I could.” The black floor “pushes away from the ceiling,” she notes, and every doorway was raised. No baseboards or crown molding were used, and the window mullions were painted white to match the walls and ceilings, creating a floating effect that draws the eye in an unobstructed way out the windows. But such spectacular views come with their own set of design challenges.

“During the day the view is very messy and very busy. I don’t like patterns, fussy or busy forms, or the space to be divided up. I like bold, simple art. If you have a space like that you honor it. You don’t bury the lead. I think it’s very important to work with the view. I’m very aware of that deep space, and it changes from day to night, and I have to work with both,” she says.

When it came to furnishings, the client already owned much that could be recycled. The new purchases were specific to the space—in particular the resin dining table from Droog.

“It’s a limited edition piece of art,” says Farley. “I bought it because it was pale aqua and an irregular shape. It felt like having another river in the space. Everything was monochromatic, so the table was the perfect counterpoint. And it’s so much fun to sit around.”

Balancing the taste of the client, who was leaning toward a warm, rustic look, and that of the husband, who preferred cool glamour, meant Farley had to combine both while maintaining a minimalist approach. Animal hides, roughhewn woods and even a large painting by Scott Redden of a dump truck are juxtaposed with the contemporary art and architecture.

But another request proved easier to address. The client was about to become the grandmother of triplets. “She was so over the moon she wanted to put a sliding chute in the apartment. I said all you need for kids is a circular floor and riding vehicles—you don’t need a jungle gym in here.”

While the kids frolic in the giant tub and play with their grandmother, their parents can sneak out a rear entrance and spend the night across the hall in the hotel. Having so many guest rooms readily available meant Farley didn’t have to dedicate space in the condo to guest quarters. Another bonus is the 24-hour room service the hotel provides, not to mention underground parking that makes entertaining a breeze.

Having completed projects in New York, Los Angeles, Washington and London over the course of her 25-year career, Farley has developed a reputation as a cutting-edge designer at home with a range of styles. Trained as a painter, she starts with the big picture but lets the client shape the final product.

“Everybody I do has their own taste. My friend’s taste is more austere than mine. I like things a little more eclectic, and she is more Jil Sander. I love solving the flow of the rooms and all those things, and then I like the client to tell me their taste and I try to make it their space, not mine. I just guide them and edit as we go.”