↓ Skip to Main Content
Search
Home › Article › The Carnegie’s Jasper Johns Exhibition: Out of Step With His Time and Ours

The major fall show at the Carnegie Museum of Art, “An Art of Changes: Jasper Johns Prints, 1960–2018,” raises questions about the museum’s programming. Jasper Johns is an American master whose work set the stage for pop art, which, in turn, changed the course of art of the last 75 years. He merged abstract expressionist gestural painting with recognizable imagery in the late 1950s and early 60s. He encouraged a new way of looking at art, a process embedded in conceptual and perceptional questioning, even stating that he was “merely concerned with looking and seeing and not much else.” 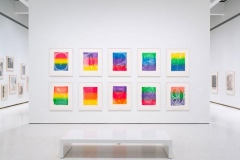 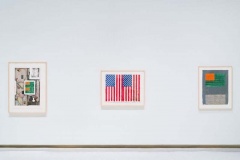 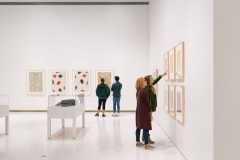 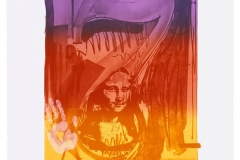 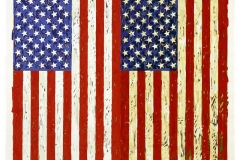 This becomes abundantly clear in the exhibition that included prints culled from the collection of the Walker Art Center.  For sixty years, Johns has repeatedly returned to certain images, making small changes that reflect his evolving aesthetic and conceptual process. His variations on a theme encourage close viewing as they affect how we think and see, creating what cultural historian Marjorie Garber called “figures of thinking” that elicit continuing questioning rather than demanding a fixed meaning or reaction. In other words, Johns allows us to see his work anew each time we encounter it.

The artist’s dramatic move from abstraction to image-based art happened at a time of great change in American culture. In the upheaval and excitement of the sixties (reaching far into the seventies), rebellion and challenge became the motivating forces for change. Johns worked in proximity and simultaneously with John Cage, Merce Cunningham, and Robert Rauschenberg; they each incorporated aspects of daily life and/or popular culture as they moved away from what they saw as the elitism of abstraction.

Johns concentrated on “things the mind already knows,” easily recognizable and common objects. His paintings, and in this exhibition, prints, of the American flag make us take a second look at the potent symbol of patriotism and democracy. When you think about the flag, do you remember a specific object flying on a pole or immediately bring up symbolic associations? And what about his paintings of flags? How do they fit into the binary of object versus symbol? Johns makes us look again and think about our assumptions and responses.

He famously exhorted artists to “make an object, do something to it, do something else to it, repeat.” In several prints from his “numbers” series, he arranged the numbers one to ten in various ways, from a single line to a dense superimposition of one over the other. He took an everyday image—an abstract symbol, not an object—and made us wonder about it. There is an intellectual rigor to his work, but there are also references to the ordinary, the everyday in his use of common things like a flashlight and a beer can.

This exhibition of his multiples gave a rare opportunity to examine the work and mind of a brilliant artist. But was it worthy of being the major show of the fall season at the Carnegie? I think not. This show seems like a retrospective, though Johns is still alive and well, making new works at almost 90 years old. His spring 2019 show at Matthew Marks Gallery in NYC included new work that amplified the “regrets” series in the Carnegie show, based on a rubber stamp he made to send regrets to the many invitations he received. But the word “regrets” also is pertinent to an older person thinking about their life. In the NYC show, his newer works, based on a Larry Burrows photograph of a grieving soldier in Vietnam, are the solemn reflections of an older artist, whose work is still relevant in the pluralism of today’s art.

The show in a NYC gallery is much more interesting than the one at the Carnegie, especially in an exhibitions program that seems lacking. Without a permanent director, the museum lacks vision. (While writing this review, the museum has hired four new directors, none a curator). And there is no permanent director either who could provide vision to a place that seems moribund. The shows since the “Carnegie International” have not been bad, but the overall program doesn’t encourage visitors to return to see what’s new. The museum seems to be in a phase of settling, of being content to bring in shows offered to them rather than aggressively pursuing shows that are much more interesting. I can remember the early eighties when shows, in several special exhibition spaces, changed every 6 weeks so there was an exciting variety, providing a reason to revisit often. Unfortunately, our museum in Pittsburgh seems diminished since then.

It takes just a quick look at a couple of other museums to see what is possible. The Akron Art Museum, a city not known for a commitment to contemporary art, recently offered “Dread and Delight: Fairy Tales in an Anxious World,” a show that was almost perfect. And the Missoula Art Museum, in a western outpost not commonly known for culture, has orchestrated an exhibitions program that makes sense in its own city but also in the larger context of an art world coming to terms with diversity.

The Akron show, travelling from the Weatherspoon Museum of Contemporary Art at the University of North Carolina in Greensboro, presented contemporary takes on fairy tales and included major artists such as Cindy Sherman, Kiki Smith, John Baldessari, Alison Saar, Ghada Amer, Tom Otterness, Carrie Mae Weems, Arturo Herrera, and even David Hockney. Using storytelling as a way to access contemporary problems, these artists worked from seven fairy tales, casting contemporary issues in older stories, proving that storytelling is one of the oldest and most effective ways of dealing with our world. From Cinderella’s carriage made out of rock sugar to a “lynched” black Rapunzel, to Snow White veiled by threads to Hansel and Gretel in cages similar to immigrant containers, the work hits hot buttons of our times. It combined the historic and the new, forcing us to think about important issues. Akron’s latest show investigates the influence of gaming culture on contemporary art.

Another notable museum that does a lot with very little is the Missoula Art Museum. Out west, it has a responsibility to acknowledge Native American art, and its current exhibition features the work of Rick Bartow, a Vietnam vet and Native American artist. His neo-expressionist work combines elements of Native American mythology with autobiography to explore identity. The museum has also shown the work of Jaune Quick-to-See Smith, who also mines the territory of Native American identity, but also the work of John Baldessari, the extraordinary conceptual artist from California who was in the 1985 “Carnegie International.” It reveals that a small museum, with a limited budget, has over the years presented exhibitions that are more interesting than those we get at the Carnegie Museum of Art and that always takes diversity into account.

Both Akron and Missoula have much smaller museums than the Carnegie in Pittsburgh, but they have strong leaders, directors who understand the importance of a cohesive exhibitions program that keeps bringing visitors back to see something new. They also understand what I call the “new normal,” an understanding that museums must be of the people, all people, and for the people. In order to gain support for programs and collections, museums need to make it obvious that every single person is welcome in the museum and that they will see themselves in the art. The Carnegie could learn a lot from the smaller museums in Akron and Missoula.