The Awe of Night

A dramatic view of the Thaw Memorial Refractor from inside the observatory’s largest dome. This image was made with a five-minute exposure of the top of the dome rotating.

For nearly three centuries, a scientific debate lingered about the brilliant rings rotating around Saturn: Were they solid discs or made of some other matter? 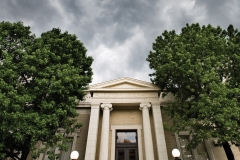 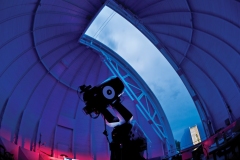 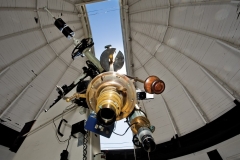 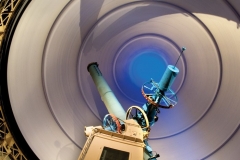 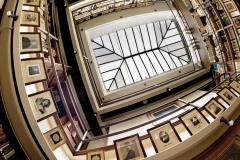 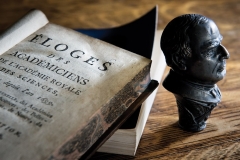 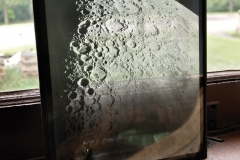 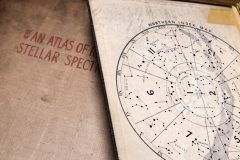 The debate finally came to rest in Pittsburgh, of all places. Astronomer James Edward Keeler, using a spectrograph attached to a refracting telescope with a 13-inch lens, observed that the rings were particles circling the planet.

Keeler’s discovery came after he calculated in the 1890s that outer edges of Saturn’s rings moved more slowly than the planet’s inner rings and thereby had to be particulate, not solid. The telescope Keeler used is the Fitz-Clark Refractor telescope, constructed in 1861 and still housed and operating inside the University of Pittsburgh’s Allegheny Observatory in Riverview Park.

The original observatory, which dates back to 1859 and was later rebuilt a mile away, continues to captivate stargazers, researchers, college students and tourists. But many Pittsburghers still know nothing of the observatory’s existence or celestial history.

“It’s absolutely amazing,” said Arthur Glaser, who works for the University of Pittsburgh as a historian for the Allegheny Observatory. “When I conduct tours, there’s always someone who comes up to me and says, ‘I’ve never been over here’ or ‘I never knew this place existed.’ Some people live within a golf shot of the front door and have never looked inside.”

To accommodate more telescopes and research, a new observatory was completed in 1912 in Riverview Park, about four miles north of downtown Pittsburgh.

The observatory comprises marble hallways, a library, a lecture hall and three domed telescope enclosures. A suspended floor in one of the domed rooms can be raised or lowered, and all three domes open for cosmic night sky viewing. There’s a stunning stained-glass window of Urania, the Greek muse of astronomy, and her long, flowing robe.

And there’s Louis Coban, the observatory’s electronic technician/administrator, and last full-time employee. Folksy, friendly and talkative, Coban boasts that his office encompasses the entire building. He can sell visitors a DVD copy of the movie, “Undaunted: The Forgotten Giants of the Allegheny Observatory,” co-produced by then Pittsburgh City Councilman Bill Peduto, now the mayor. Or he can recite the observatory’s history, its advances in science and how it came into possession of the University of Pittsburgh (Pitt students continue to study at the observatory).

Coban knows his astrophysics, too. During a recent visit, he explained the science behind Keeler’s breakthrough Saturn ring discovery and shared the observatory’s collection of photographic plates of star fields. The collection, which began in 1914, holds more than 110,000 images.

The original observatory building was founded by a group of industrialists who started the Allegheny Telescope Association after becoming enraptured with Donati’s Comet, hailed for its long, elliptical orbit. Some five years later, after many nights of recreational sky watching, the men donated the original building and telescope they had purchased to the Western University of Pennsylvania, which is now the University of Pittsburgh. Samuel Langley, an astrophysics professor at Pitt, was the observatory’s first director. Langley researched sunspots and worked on designs for an aircraft that predated the Wright brothers’ flying invention. His drawings of sunspots were so detailed that they continue to appear in astronomy textbooks.

He also kept the building afloat financially by developing the Allegheny System, a way of keeping time by measuring positions and movement of stars. The precise star-tracking system translated into a standardized time system, which Langley monetized and marketed. He sold time measurements to railroads and other industries, transmitting information by telegraph. For years, the observatory’s biggest use was astronomically establishing the correct time.

Things got quirkier in 1872, when someone broke into the observatory and stole the lens of the Fitz-Clark telescope. As publicity about the theft grew, Langley tracked down the perpetrator, met him in the woods behind the observatory and told him he’d keep his identity a secret if the lens were returned.

“The thief wanted money, but Langley refused,” Coban said. “The only stipulation was that the thief would not be revealed.” The lens was retrieved, as Coban said, “In a carpet bag in a garbage can behind a hotel in Beaver Falls.”

“Brashear had a magnetic personality, and he truly believed in this project,” Glaser, the historian, said. “He was able to translate his love for the concept of a new observatory building to the people who had the money to back him.”

The three giant telescopes inside are the 30-inch Thaw Refractor; the Keeler Memorial Reflector and the oldest, the 13-inch Fitz-Clark Refractor. Brashear is memorialized with a statue on the first floor. And, in the observatory’s basement, the ashes of Brashear and his wife, Phoebe, are interred in a crypt beneath the Keeler telescope. They share a single urn. A plaque on the crypt reads: “We have loved the stars too fondly to be fearful of the night.”

The ashes of James Keeler and his wife, Cora, and their son also are interred in the same room. Cora Keeler’s remains were transferred from Arkansas to the Allegheny Observatory in 2007. Coban sealed the remains in the crypt, thereby reuniting the Keeler family.

Coban worked at a gas station for eight years before taking up astronomy as a hobby and joining the Amateur Astronomers Association of Pittsburgh. He was hired to work part time at the observatory 20 years ago when there were 16 employees. Three years later, he was hired full time.

“Throughout the years, we lost people due to funding cuts,” Coban said. “Eventually, I sort of took over as administrator. I just fell into this.”

Glaser said of Coban: “He can do everything: He can tear a telescope apart, put it back together and make everything work.”

Coban shows up for work around noon or 1 p.m. and sometimes works late into the night, depending on the sky’s clarity. “It’s kind of nice,” he said. “For right now, the place sort of belongs to me.”

Glaser, a former American history teacher in the Mt. Lebanon School District, began compiling the history of the observatory during a sabbatical in 1982. He runs evening tours and appears extensively in “Undaunted,” the documentary about the observatory.

“I still get a little bit of exhilaration every time I walk in, and I have walked in thousands of times,” Glaser said in a recent interview with Pittsburgh Quarterly. “And I really enjoy showing visitors stuff in the sky and watching their amazement. Sometimes the view of Saturn is so clear that they think the planet’s image is painted at the end of the telescope.”

And what of the observatory’s future?

“I would say that the future of the Allegheny Observatory lies in two directions,” said David Turnshek, chair of Pitt’s department of physics and astronomy and the observatory’s director. “First is providing research experiences for undergraduates. It’s a great observatory for that type of thing. During the academic year, we have students up there four nights per week.”

One of the very successful research programs involves observing exoplanets, or planets outside the solar system—known as STEPUP (Search for Transiting Exoplanets at the University of Pittsburgh).

“Another important ongoing and future function of the Allegheny Observatory is public outreach,” Turnshek said. “We have a significant number of tours during early spring to late fall, an annual open house in the fall and a variety of other smaller public outreach events.”

Ben Schmitt graduated from Peabody High School in 1988 and Michigan State University in 1992 with a bachelor's degree in journalism. He worked as a reporter at the Concord Monitor, Savannah Morning News, American Lawyer Media and the Detroit Free Press and won a national Emmy award in 2008 for two video stories about pit bulls. He also helped report on the downfall of former Detroit Mayor Kwame Kilpatrick, which earned the Free Press a Pulitzer Prize in 2009. He is now a staff writer for the Tribune-Review.