Steak Night at the Firehouse

Sunday dinner at Station 17 in
Homewood was supposed to be around 5:30. Maybe 6 at the latest. Because this is Steak Night. They almost never get to do Steak Night. 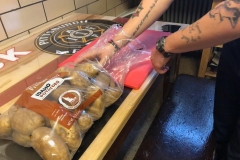 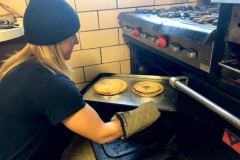 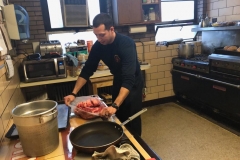 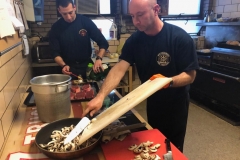 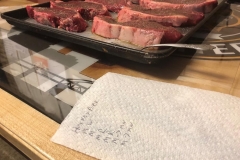 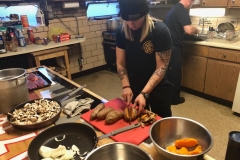 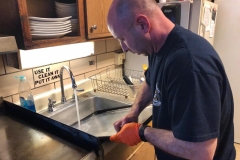 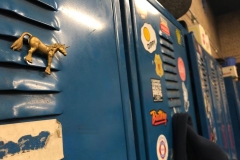 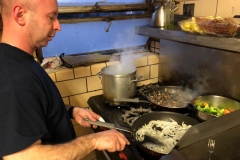 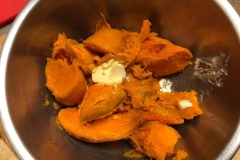 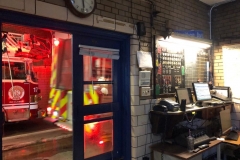 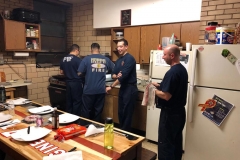 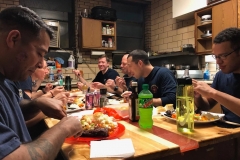 Which is why John and Bill started peeling onions, slicing mushrooms, getting the meat and the baked potatoes and the green beans ready almost an hour ago.
But then the call came in, just around 5:15.

This is the running joke. Grab some New York strip steaks, get the grill at just the right temperature, and then wait for the radio to start squawking.

“Almost every time we have steaks, we have a fire,” John says, turning off the burners on the commercial grade oven.

Ladder truck, ready. Engine pumper, the one that can hose out 500 gallons of water in 15 minutes, ready. A crew of eight City of Pittsburgh firefighters, immediately ready.

“This always happens on Steak Night,” Bill says, dropping the mandolin slicer and the white onion, rushing through the crew room. “Always.”

Gear on. Doors slamming. Red lights flashing. Sirens wailing. Everybody rolling out the door, heading a few miles down the road to a house in Wilkinsburg. Bed on fire!

Kitchen empty. Mushrooms not sautéing. Onions still raw. Sweet and russet potatoes no longer baking. Green beans still in the bag. Sticks of butter melting on a plate. Twelve, thick and juicy slabs of meat dusted with salt and pepper and garlic salt sitting on a baking sheet instead of over an open flame in the Brinkman Select grill outside, the one that everyone at the station chipped in and bought themselves but that now has hot spots and cold spots and just lost one … actually, make that two, burners.

Something always happens on Steak Night.

It also always happens when a crew of four piles into their engine for a trip to Giant Eagle or Costco in the morning. Because it’s not like they roll into the station every day and somehow, magically, the refrigerator is stocked with something for them to eat while they’re on duty, working 24-hour shifts. So, they all throw 15 bucks into the kitty to buy the groceries for the two meals they’ll eat together at the 10-foot-long kitchen table with matching benches. And right when half the cart is on the cashier’s conveyor belt, it’s ding! Ping! Everyone scrambling to see the alert on their phones.

Station 17! Accident! Vehicles off to the side of the road!

The cashiers at Giant Eagle and Costco all know the drill. They’ll just set the groceries aside and wait for Station 17 to come back and pay for them.

Every morning, life at the station begins with everyone on the crew chiming in on what they want John and Bill to cook during their shift.
I had chicken last night.

We just had pork.

Can we do Italian?

“We like to keep our meals simple,” John says. “Chicken, pork, steak. Whatever’s on sale, although we did go a little over budget for Steak Night. And we try to accommodate everyone.”

Because no fish for Kari.

Jeremy’s lactose intolerant, which is why he’ll be having a Fla-vor-ice freezer pop for dessert instead of the ice cream sandwiches with the super soft cookie part that, oh … my … God, have you tried yet?

The Captain, whom they all call Cap, doesn’t like mushrooms or peppers.

Nothing spicy for the Lieutenant. Esophagus problems.

And no pasta in the shape of choo-choo wheels for anyone. Ever.

“Bill’s very particular about what he eats and whatever we can eat,” Jeremy explains.

Nothing green, no leftovers, or anything not close to being chargrilled for Mike, who keeps an emergency Totino’s pizza in the freezer at all times.

“Literally, the worst pizza ever made,” Bill says.

“Worse than my 6-year-old,” Bill laughs.

Mike’s the one with the Transformers bedspread back in the windowless bunk room where the air conditioner runs 365 days a year. “Circulates the air, if you know what I mean,” Bill says. It’s where everyone except for whomever is on Night Watch goes to shut their eyes for a few minutes or maybe an hour or two during their 24-hour shifts. When they do, John will crawl under Darth Vader sheets, Bill will crawl under Red Sox sheets…

“What the hell, Bill?” someone shouts.

And all the mattress covers on all the beds have a unicorn embroidered on them.

“OK, so Station Number 8, in East Liberty, they call themselves the Dragon Slayers,” Bill explains. “Well, the only thing that can kill dragons are unicorns, sooo… It’s a rivalry thing. Station 8 will do things like fill our boots with cheeseballs.”

There are a lot of unicorns floating around Station 17. Unicorn string lights, unicorn stickers on lockers that say things like, PROTECTED BY KILLER UNICORNS!, a figurine of a donkey that’s supposed to be a unicorn, because, well, close enough.

The engine and the ladder truck finally return around 6:05 p.m. “That was a quick one,” John says, grabbing the tray of meat, half his gear still on as he heads outside. “How do you like your steaks?” he calls out as everyone congregates near the grill.

“I can tell which one is Mike’s from here,” Jeremy says from 10 feet away as one piece of meat sizzles itself black.

Inside, the long table in the kitchen has been set. Plates and silverware and sour cream and A1, French, Russian, and Italian dressings and a massive, 40-ounce container of ranch, along with bags of taco style, pepper jack and sharp cheddar cheeses. Everything ready. Everyone starving.

“We won’t eat until they get back,” Bill says. “It’s a guilt thing. It really is. But if a call comes in when you already get your first fork full in, you’re on your own.”

But no one had a chance to fill their fork with anything, so the ladder crew will wait another 45 minutes, until 7:20, when the engine crew finally returns. Lights and sirens off. Four firefighters pulling off their gear. Everyone grabbing a plate, taking their usual spot at the table. Starving.

“If you tell people, ‘We all eat dinner together,’ they say, ‘Big deal,’” Cap says. “But it brings the crews closer and creates a family atmosphere.”

Everyone’s laughing, joking, torturing each other, asking politely for a paper towel, to pass the salt, listening for the radio to start squawking again. Station 17!

Which it does. Immediately after everyone finishes shoveling in their steak dinners and just after Kari washes the plates and Jeremy dries them, because Rule No.1 is that the guys who cook don’t have to do the dishes but Rule No. 2 is to never tell Jeremy’s wife that he actually knows how to do the dishes.